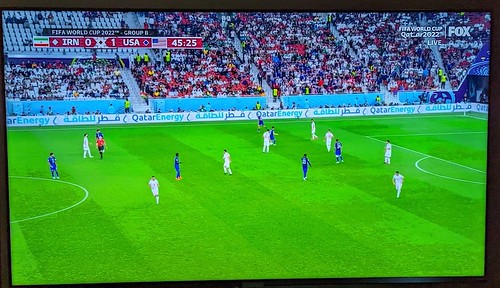 Photo of my TV during Tuesday’s US v Iran game

The United States team lost to the Netherlands yesterday at the start of the “knockout” round. At least the Americans made it into that group. They did so by defeating a tough team from Iran on Tuesday afternoon by a score of 1 to 0.

The Americans dominated the start of that game. Anytime an Iranian player got the ball, an American would be on him instantly and often take the ball away. But Iran knew what it was doing and played patiently. In the second half, the Americans weren’t stealing the ball anymore. The hot temperature in the desert brought them back to earth. Fortunately, the Americans had scored their lone goal two-thirds of the way through the first half. Iran had several excellent chances to score in the second half but couldn’t put the ball in the net.

The American players had two opponents: Iran and exhaustion. Had Iran scored and the game ended in a tie, the US team would have been out of the tournament and Iran would have advanced.

Playing fast at the start and fading at the end was not unique to the Americans. I saw it happen to the South Koreans and the Japanese in separate games. As I mentioned in last Sunday’s report, I’m a soccer neophyte so this is in no way a criticism of the US players who are all superb athletes or of their coach. It’s just an observation.

As for the Dutch victory on Saturday, they just played better and looked like the better team. The final score was 3 to 1 and it was far from a blowout. The Dutch had gone up 2 to 0 with about 20 minutes left in the game when the Americans scored their first goal. The US players upped their aggressiveness after that but paid the price. The Americans tried to force the ball inside, lost it, and surrendered the killer third goal to a Dutch counterattack.

The Americans had a terrific chance to score just eight minutes into the game, but the player who got the ball in front of the Dutch net was only able to dribble a weak shot that was easily handled by the Dutch goaltender. Something similar happened early in the second half when another American player with an excellent chance couldn’t drive it home. Great scoring chances are rare in soccer. Great teams take advantage of them.

Likewise, on the defensive side on at least two of the Dutch goals, the Americans seemed to lose track of the player who ended up with the ball. The more experienced Dutch players didn’t miss when they had open shots.

One thing that stood out was the size of the Dutch players. Their goalie was 6’8” and one of their defensemen was 6’5”, much taller than any of the Americans. In a game where a “header” in front of the opponent’s net is a reliable means of scoring a goal, having to jump against an opponent much taller than you isn’t a recipe for success.

Nevertheless, congratulations to the American team. Four years ago, the team didn’t even qualify for the World Cup, so this is great progress.

A big risk the Americans avoided against Iran was committing a foul in front of their own net. The consequence of committing one would be a penalty kick for Iran which would almost certainly result in a goal. With a penalty kick, the offensive player stands alone in front of the goaltender who is anchored to the goal line. It’s not like a penalty shot in hockey where the goalie can come out of the net to cut down the angles available to the shooter. In soccer, the goalie must stand there until the kick is made and only then react. Because the shooter is so close and the net so big, the goalie must guess what the shooter is going to do and react prospectively. The offensive player must only pick out a corner of the net and kick the ball into it. Occasionally, the kicker will miss the net or rarely the goalie will guess right and make a save, but usually a goal results. That’s what happened in the first game of the tournament for the US. The team was up over Wales 1 to 0 when with 10 minutes left the referee called a foul on an American defender. The star of the Wales team was awarded a penalty kick and scored easily to tie the score. That’s how that game ended.

Because there is a great deal of gamesmanship in soccer, perhaps more than in other professional sports in America, the Iranian players would have dropped to the ground as if shot had an American defender even breathed upon them in the closing moments of Tuesday’s game. But the Americans avoided that fate. Even in the desperation to clear the ball and keep it out of their net, the US players kept their composure and had no game-altering fouls called on them. That cannot have been an accident.

Usually the World Cup is in the early summer. That’s what Fox TV expected when it won the bid to televise this tournament. But host country Qatar seems to do what it wants so after all the contracts were awarded, it moved the games to the early winter due to the extreme temperatures that would be experienced in Qatar when the games normally would be held. This was an unfortunate twist for Fox which was already a prime presenter of American football (another huge cost for the TV network). Now, the World Cup and the NFL would occur at the same time, diluting Fox’s ability to get maximum return on the two big investments.

Despite the contractual gyrations caused by rescheduling the games, it’s probably for the best that the games were moved from summer to “winter.” The TV announcers frequently mention the high temperatures there. The stadiums are partially enclosed with some air conditioning, but all have open roofs and in many of the games, the sun was shining on at least part of the field. By the second half, every player looked parched. As mentioned above, you can see the speed of the game slow as it progresses. Running for 90 minutes straight in high heat will do that.

The World Cup might be more interesting to me than the English Premiere League or America’s Major League Soccer because countries from different corners of the globe with different languages and cultures find themselves playing against each other in a common game under a common set of rules. Cameroon v Serbia; Netherlands v Ecuador; South Korea v Ghana; Japan v Germany; Australia v Tunisia; and Wales v Iran were contests I would not expect to see.

Some cultural differences were readily apparent. When Argentina scored a goal, its players raced to the corner of the field where most of its fans sat, and interacted with the fans. When teams from the Middle East scored, their players dropped to their knees and a prone position, presumably in prayer. Fans of some countries sing continuously. I think this is mostly a South American thing and when you’re listening on TV it can get annoying. So can the horns and whistles which, for an American viewer, are easy to confuse with a referee’s whistle or the horn that sounds at the end of the half in a basketball game.

Perhaps my favorite cultural marker came from the Japanese. After one of their matches, my social media feed filled with pictures of their fans with open trash bags, cleaning up the stands in which they sat. That was matched by a photo of the Japanese locker room after the team had left. It was spotless, with the towels folded neatly in a pile in the center of the floor.

Living in a community troubled by litter, it’s tough to imagine a place where people don’t casually throw trash on the ground, never mind pick up after everyone else.

Two major European soccer powers, Belgium and Germany, were knocked out in the first phase of this tournament. Commentators mentioned the significance of Germany’s exit on the fortieth anniversary of the so-called Disgrace of Gijon. Although I was unfamiliar with that term, I knew exactly what they were talking about.

Back in the summer of 1982, I was midway through a three year tour of duty in West Germany with the US Army. For some reason, I picked up a lot of chatter about the World Cup, particularly a match between Germany and Austria that was played on Friday, June 25, 1982. I think it was declared a national holiday. We weren’t in the field so we were dismissed from work at lunch time. The streets I traveled on during the drive from the base to my apartment were completely deserted.

I’d purchased a TV at the PX in Stuttgart, so it had two bands: one for American TV which consisted of one station, Armed Forces Network; and another for European TV which I hardly ever watched. On that day, I pressed the PAL button to switch to the European frequency and immediately got the live broadcast of the soccer match. Since it was a German TV station, the commentary was in German spoken so rapidly that it outpaced my limited comprehension of the language. But I could still watch.

I don’t ever remember being so bored. All the players did was pass it back and forth at midfield. Germany had the lead, 1 to 0, but even when the Austrian players got the ball they didn’t advance it. They too passed it back and forth until a German got the ball with the same result. The fans were whistling loudly which even I knew was European for “Boo” but I had no idea of what was going on and jettisoned soccer from my list of things that were interesting to follow.

Years later, I learned what had happened in that game. It took place in the portion of World Cup play that we were in this past week with groups of four competing to make it to the elimination round. Germany and Austria were in the same group along with Algeria and Chile. Those two had played the day before and with the outcome of that match already known, the German and Austrian players knew that if Germany defeated Austria by more than two goals, then Germany and Algeria would advance to the next round. But if Germany won by just one or two goals, then, because of the “goal differential” tie breaker, Austria and not Algeria would advance.

Germany and Austria gamed the system so that Austria and not Algeria advanced to the next round. They were able to do that because they already knew the result of the game between the other two teams in their group. To prevent this in the future, World Cup organizers changed the schedule so that the final set of games among teams in the same group would be played simultaneously.

Up until this past Tuesday, games were at 5am, 8am, 11am, and 1pm EST, but starting on Tuesday, there would be two games at 10am which would involve all the teams in one group; then two more games at 1pm, involving all four teams in the next group. That way, players would not know the outcome of the other game in their group and would have no real time incentive to throw the match.