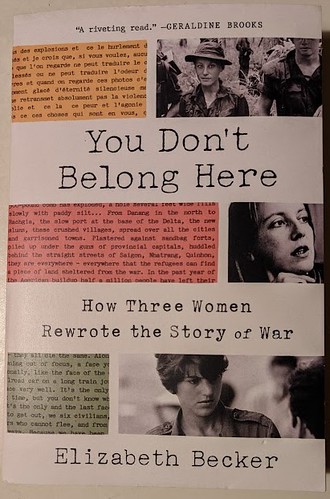 You Don’t Belong Here: How Three Women Rewrote the Story of War by Elizabeth Becker

In the final chapter of her excellent book, You Don’t Belong Here, Elizabeth Becker writes that in 2015 she traveled to Cambodia to testify in war crime trials for some surviving Khmer Rouge leaders. When Becker was cross-examined, she was questioned about a negative review of a book she had written about her experience in Cambodia in the 1970s. She pointed out that all other review of the book were favorable, and that the reviewer in question gave positive reviews to other books on Cambodia, but those books were all written by men.

The evident misogyny reminded Becker of the experience she had when she arrived in Cambodia in January 1973 as a novice reporter. Direct involvement by the American military in the Vietnam War had pretty much ended by then – the POWs were released in February 1973 – and Becker remained until August 1973 when she was forced to flee Phnom Penh just as the Khmer Rouge occupied the city.

Becker returned to Cambodia in 1978 with two male colleagues at the invitation of the Khmer Rouge and became the only reporters to interview Pol Pot (in their hotel the night of the interview earlier that day, one of Becker’s colleagues was murdered and Becker and the other man were almost killed by mysterious intruders).

As she contemplated all she had accomplished in her career, Becker’s thoughts turned to three other women who preceded her as reporters in Vietnam. She had come to know each of them and understood that their much harsher treatment at the hands of male colleagues and military officers, and their perseverance in the face of that, made her professional experience possible.

The three women were Katherine Webb of Australia; Frances Fitzgerald of the United States; and Catherine Leroy of France. Here’s a synopsis of their experiences in Vietnam as told by Becker in her book:

Katherine Webb was born in New Zealand in 1943 to Australian parents who soon moved the family back to Australia. Her father was a political science professor at an Australian university; her mother was a women’s rights activists. When Webb was 15, she joined a suicide pact with a friend, provided the gun, and watched as the friend shot and killed herself. Webb abandoned the plot and was charged with murder. After widely covered trial, she was acquitted. Three years later, Webb’s parents were killed in a car accident. The two plunged Webb into a deep depression.

To escape, Webb became a reporter. After working briefly for an Australian newspaper, she quit that job and traveled to Vietnam and sought work. Major news organizations wouldn’t hire her because she was a woman. However, she began getting assignments from a South Vietnamese newspaper then eventually was hired by a small American magazine. That allowed her to get official press credentials which were the combat-equivalent of a Eurail Pass in that it allowed her to go anywhere US forces went, provided the local commander consented, which most did. (Reporters look at this as the golden age of war journalism in that there were barely any restrictions placed on reporters by the military).

Webb wrote compelling stories about the military, but also about the Vietnamese people and government, topics that male reporters neglected. Eventually she was hired by the United Press International (UPI). During the 1968 Tet Offensive, she was the first American reporter to reach the besieged US Embassy in Saigon and provide eyewitness reporting from there. She left Vietnam and spent 1969 and 1970 in the United States but felt the pull of Southeast Asia.

Because Vietnam at that time was awash in US reporters, Webb went to Phnom Penh and created the UPI’s Cambodian bureau. In 1971, she and four non-US male reporters were captured by North Vietnamese troops in Cambodia. They were held captive for two weeks then released. After recuperating from illness contracted during her captivity, Webb returned to Cambodia and wrote many articles about the US bombing. She also covered the evacuation of Saigon from Clark Air Base in the Philippines. She continued to work as a journalist covering conflicts around the globe for Agence France-Presse but died of cancer in 2007 at age 64.

Catherine Leroy was born in 1944 to a middle-class French family living in the outskirts of Paris. Her adolescence was aimless, although to impress a boyfriend, she took up skydiving. As she reached her 20s, she began noticing photographs in Paris Match of the Indochina War and decided she wanted to become a war correspondent. She acquired a camera, learned its operation, and bought a plane ticket to Saigon, arriving with $200 and no job or contacts. She eventually sold some photos to the Associated Press and was granted the all-important press credentials. She established a reputation of fitting in with combat units in the field but of being “rough around the edges” back at headquarters. The latter characterization had more to do with her gender than her behavior because male correspondents would be admired for doing things for which she was condemned (like swearing). Nevertheless, when the US Army planned a combat parachute jump by the 173rd Airborne Brigade, the only combat jump made during the Vietnam War, Leroy was the only one with press credentials who was airborne qualified. She made the jump and shot iconic photos of the other parachutists descending through the pre-dawn sky. In 1967, she frequently accompanied US Marine units into heavy combat and many of the pictures she took were published in Life magazine. Also in 1967, she was severely wounded by a North Vietnamese mortar shell. Returning to the field after her recovery, she was in Hue during the Tet Offensive and was captured by North Vietnamese soldiers. Because she was French, they treated her as a journalist and allowed her to photograph them. She was released soon after and her photos, also published in Life magazine, were the first of North Vietnamese troops behind their own lines to be published in the west. She left Vietnam in 1968, returned to Paris, but ended up in the United States, spending time with veterans who opposed the war. She returned to Saigon in 1975 to cover the fall of South Vietnam, photographing the arrival of North Vietnamese tanks at the presidential palace. She covered other conflicts around the world through the 1970s and 80s but eventually settled in New York City. She died of cancer in 2006 at age 62.

Frances FitzGerald was born in 1940, the only child of an upper-class New York City family. Her parents divorced when she was young. Her father, at attorney who had been in the OSS during World War Two, stayed in the CIA after the war and was engaged in covert operations around the globe, rising to the rank of deputy director by the time of his death of a heart attack in 1967 at age 57. Her mother, Marietta Endicott Peabody, a descendent of several early New England families, was a socialite who also worked as a political reporter and became a close associate of and advisor to Adlai Stevenson while he was the Democratic nominee for president. Frances graduated from Radcliffe and began leading an unfulfilling life in New York City in her mother’s societal shadow. To break out of this, Fitzgerald traveled to Vietnam with aspirations to work as a journalist. Unlike Webb and Leroy who struggled to get work there, Fitzgerald used her family connections and her own background to interact with journalists and US officials at the highest levels. She had no problem finding work as a journalist. However, unlike most journalists in Vietnam who focused on combat operations, Fitzgerald concentrated on the effects of the war on the South Vietnamese people and on the country’s politics. As 1966 ended, Fitzgerald returned to the US to write a book about Vietnam. Published in 1972, Fire in the Lake won the Pulitzer Prize, the Booker Prize, and the National Book Award. The book’s premise was that the United States did not understand the history and culture of Vietnam which adversely affected America’s chances of success in the war. Fitzgerald returned to Vietnam in 1974 after American troops had withdrawn and made her way to Hanoi where she covered the fall of Vietnam from the North Vietnamese perspective. Fitzgerald continued to write books about American politics and foreign policy. Her most recent, The Evangelicals: The Struggle to Shape America, was published in 2017.

You Don’t Belong Here is several books in one. It’s a concise account of American’s involvement in Vietnam; it also depicts the Khmer Rouge victory against the Cambodian forces under Lon Nol who was supported by the Americans; and finally, it tells the story of three courageous, determined women who broke down gender barriers while producing quality journalism that rivaled the work of their more established male colleagues.