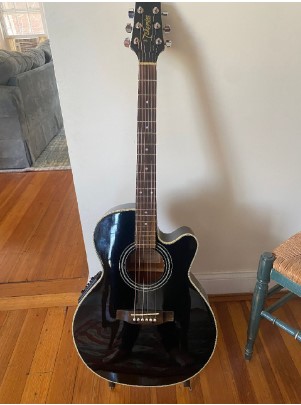 The Takamine Guitar company was founded in Japan in 1959.  While it manufactures a range of guitars, it is best known for its acoustic models, many with a built-in pick-up preamplifier, so you can just plug it in an amp. The price range for a Takamine is from around $300 to $4000 and beyond. There’s some argument about how they sound; some guitarists find them tinny and thin when not amplified. But as artists as varied as Jerry Garcia and Bruce Springsteen have used them, it’s no doubt a quality guitar.

Every year on Christmas eve day, we’d leave our place in Somerville, MA and head to New Hampshire to spend Christmas with my (second) wife’s family—her mother and father and two brothers. That night there’d also be a party, with more aunts, uncles, and cousins than would seem possible in one family.

Before we left for the trip, as we always did, we left a message on our answering machine.  This year, this is what you’d hear my wife and I sing if you called us:

Had a very shiny nose

And if you ever saw it (saw it)

You would even say it glowed (like a light bulb)

All of the other reindeer

Used to laugh and call him names

Then one foggy Christmas Eve Santa came to say

Rudolph with your nose so bright

Won’t you guide our sleigh tonight

Then how the reindeer loved him

As they shouted out with glee (glee, glee, glee)

Christmas Day, opening gifts, a fine dinner, a long nap, and the next day we were on our way home.

Get home, unload the car, and grateful rest from a busy couple days. I was about to put a DVD in we’d gotten as a gift, ‘Rushmore’ I think, but my wife said, “Wait a minute, there’s one more present.” She went to the closet and pulled out a guitar case.  And THERE IT WAS, the most beautiful guitar I’d ever seen:  A dark blue, Takamine acoustic.  I don’t know what it cost, but it was plenty, and we didn’t have much money back then.

While I picked away, my wife checked our phone. After our ‘Rudolph’ greeting, the first message was from Bryan, but it was, as usual, incomprehensible, as he was completely gone on drugs and alcohol. The second from a mutual friend—after hearing ‘Rudolph’—telling me that Bryan was dead. Dead? That can’t be, but it was. In the middle of the joy of playing my beautiful new guitar, I hear on the phone, my best friend is dead.

On Bryan: We’d grown up together, my best friend, and I truly loved him. In many ways we were different; he was athletic, I wasn’t; he was strong and muscular, I was not really fat but kind of flabby; the girls adored him, me…ehh. And everyone liked him, even loved him, not because he was a football hero, or handsome, but because of who he was: a nice guy, who liked everyone, treated everyone with respect, and was a very gentle person you could instantly warm to.

But beneath this confident, popular young man, this golden boy, was a darkness he kept well hidden.  But still at times, it would come out. He would seem to go away, retreat into a sadness and loneliness.  He would be distant and anxious, turn inward into silence; as if brooding over thoughts and feelings only he could understand.

Only once did he let me in, and as it was only once, I remember. We were smoking and drinking down by the river, as we often did, when he said out of the blue, “I’m afraid.”

“I don’t know,” he said, “It’s like the world doesn’t want me here, that I get by with a mask, that’s gonna get found and ripped off.”

I didn’t know what to make of this. That third beer was probably it. This wasn’t Bryan, and he quickly turned back to talking about the new girl in school and how fine she was. I was glad he was back. At fourteen or fifteen, who knows, or knew then, about depression and anxiety. I know now, Bryan had both.

Still, such episodes were rare and we’d always be together, my sleeping over at his place all the time (his place had a shower, mine didn’t). Sneaking beers and cigarettes down by the local river. Making plans: we’d move to the Village in New York, he’d paint (he was a gifted painter) and I’d write (at 14, I’d already had some stuff published). Our lives would be just like Bob Dylan’s ‘Free Wheelin’ album cover: He (or I, or both of us) walking down some desolate Village street, with a beautiful and very very cool woman on his arm. What could be better.

On Dylan:  I don’t know how we discovered him, but we did.  And we would play ‘Free Wheelin’ over and over and over again.  We didn’t always understand what ‘the message’ was, but it didn’t matter.  It was the sound, the words that went beyond surfing and losing my girl, the honesty and brilliance of his words. It was an existential revelation we (and only we) shared, though perhaps Bryan heard more than I did.  And our bond to become more than we were, became sacred and serious.

But teenage dreams often fade and ours did. After high school, he went to college, I got drafted, and the Village bond became more and more of a memory. We both married and quickly divorced. I went back to college and eventually got a PhD; he moved to Florida, remarried (as I did), had a bunch of kids, and finally separated from his second wife, why exactly I don’t know.

Drinking and drugging, but mainly drinking, was nothing new to us, we’d grown up doing it. But I’d, more or less, beaten both, he hadn’t.  He started to call me, almost daily. At first his calls would be fine, slurring words here and there, but no big deal.  But I finally asked him what was going on, and he said that life was tough, and booze and on-line purchased anti-depressants (though he didn’t use those exact words) taken together helped. “You’d be amazed at what you can buy on-line,” he said. And at that moment I knew what was going on.  The darkness he had gone to when we were kids I realized was anxiety and depression.  And it was still with him; he was not an addict, he was ill, and doing the best he knew how.  I told him so, told him to see a therapist, get help.  I told him I’d come down there if need be,  He said no, he’d be fine; he’d seek help, and he did.  But, whatever the reasons, it didn’t help enough.

As time went on his phone calls became more and more incoherent; more grunts and groans than words. Finally, when he called, I stopped answering.  It was too painful, and to be honest, I stopped caring less than I should have. I had my own life to live.

Through my tears, after learning of his death, I kept saying I should have been there, I could have helped him, saved him. But I didn’t.  And, yes, I know, an ‘addict’ (which, once again, Bryan wasn’t, but he was in trouble) only gets clean if they want to. And, yes, I know my intervention would probably not have changed things. Hell, I didn’t even know where he was in Florida. But the guilt remains, I should have been there, I should have reminded him of Dylan, the Village, and our one-time dreams. I could have saved his life, and I didn’t. Though I’ve learned to live with it, my failure haunts me to this day. He deserved better from me, and he didn’t get it.

Nevertheless, he died in Florida. He was cremated and a service was held. At the service were many of Bryan’s siblings, his first wife, many Florida friends, some friends from college, and friends who made the long drive from our home town in Northern New York to Florida. His sister told me later on that four guys, each from different eras of Bryan’s life, told her “Bryan was my best friend.” Through it all, Bryan retained that thing that drew people toward him, made them love him. But he did not love himself.

I didn’t go to Florida; I’m not sure if it’s because I was broke and couldn’t afford the flight or that I simply couldn’t face the fact that Bryan was gone. So I found the funeral home his service was being held at and sent flowers with this Bob Dylan quote: “for I’m one too many mornings, and a thousand miles behind.”

I often play my Takamine and think of him.

One Response to The Guitar