Mike McCormick of Alaska by way of Haverhill and Haverhill High School, has some observations on this year’s Haverhill High hazing incident and the subsequent cancellation of the school’s Thanksgiving Day football game against Lowell High. 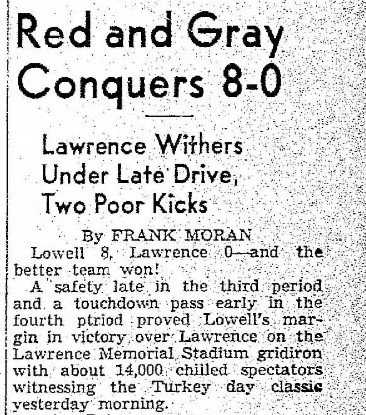 Lowell was clinging to a 2-0 lead over upriver archrival Lawrence when a 155 pound, 5’7’’inch halfback named John Kerouac snagged a tipped pass and rumbled fourteen yards through Lawrence defenders to land in the end zone.

If Kerouac hadn’t secured that scholarship, he would not have attended Columbia University. He wouldn’t have met Neil Cassady, Allen Ginsberg, and William Burroughs. He would not have written On the Road, the book that influenced untold thousands.

There would never have been a “beat generation;” rock pioneers and legends including Jim Morrison, Janis Joplin, Van Morrison, and Jimmy Page (just to name a handful) would have lacked Kerouac’s inspiration in the early stages of their musical journeys.

And this year there would be no celebrations in Lowell to mark the author’s birth a hundred years ago.

When I grabbed my cell phone in Eagle River, in Alaska’s morning darkness, I found a simple message from Butch in Ellsworth, Maine: “Haverhill High football canceled cuz of hazing by players.”

I found accounts about the cancellation of Haverhill’s upcoming Thanksgiving contest against Lowell on a half dozen news outlets. Two Haverhill High upperclassmen had dragged a freshman teammate across the floor and attempted to strip him of his clothes. A fourth teammate “twerked” into the victim’s face. Investigations were ongoing. Criminal charges were expected.

In 2018 O’Connor spoke to Lawrence’s “The Eagle Tribune” when schools were considering Thanksgiving game cancellations because of increasingly inclement November weather:

“It is a tradition that I don’t want to see go away, and as long as I’m the head coach of Haverhill High, we’ll always play on Thanksgiving.”

News reporters filed stories about the hazing incident at Haverhill’s football stadium, now called Trinity Stadium.   The concrete grandstands seating 5,000 people and a brick wall built from bricks salvaged from demolished factories were constructed in the 1930’s. The stadium hosted the first New England Patriots scrimmage in 1960 as well as baseball games with Babe Ruth and Lou Gehrig.

I remember attending my first football game there with my mother before I entered first grade.  The crowds, the cheering, the music from the marching bands awed me. The Hillies, in their brown uniforms, won that day. My mother and I blended with groups of students, kicking fallen leaves, cheering and chanting, shuffling along the River Street parkway.

Everyone went to the football game and Haverhill won it so.”

Walking with my mother in late 1950’s America, high school football seemed to be the center of the universe. I decided then and there that someday I would play for the Hillies.

Haverhill played our 1970 Thanksgiving contest in New Hampshire against Manchester Central my senior year. The game was a culmination of a dream that had been born more than a decade before on the walk home from Haverhill Stadium with my mother. The dream had been nurtured and supported through the years by parents, coaches, and friends. I’d worked and practiced for hours and hours, years and years, to make myself a good football player. As I walked onto the field with my senior classmates to witness the coin toss before the final game of our high school careers, I recognized the moment was the beginning of an end.

We were leading our undefeated New Hampshire rivals with less than three minutes remaining when Central’s quarterback flipped a pass over my outstretched arms into the hands of Stanley Pinkos, the team’s all-state fullback. Pinkos rambled for more than fifty yards into the end zone.

Manchester led the game.  We had time for one more offensive drive

With the victory Manchester earned a state championship. We were left to ponder a 4-5 record the rest of our lives.

As I yanked off my helmet in the locker room, I realized that I might never wear a helmet again. I sobbed. Hillies’ backfield Coach McGuire slid in behind me and literally pulled my jersey off over my pads. I wasn’t ready to face that the football career that I’d worked so hard to realize was over.

Milton Coach Steve Dembowski thought of students when he spoke to a “Boston Globe” reporter after the 90th holiday battle between Milton and Braintree was cancelled because of Covid:

“The kids are devastated.”

My boyhood friend and Hillie teammate Jack texted me from Bedford, New Hampshire after he read about the hazing.

“I hate that the whole team suffers because of a few. And it affects Lowell kids too.”

While it’s unlikely that any Red Raider or Hillie would have nailed down a scholarship at a Thanksgiving game this year as John Kerouac did eighty-four years ago, the impact of the Thanksgiving Day game cancellation will be widespread. Parents will be deprived the experience of watching sons play one final game. Cheerleaders will lose a performance opportunity.  Friends and relatives will be denied the pleasure of enjoying a game and encouraging team members. Current and former citizens of Haverhill and Lowell who looked forward to the game, who planned to listen, attend, read about, and/or talk about the contest will be denied a traditional holiday pleasure.

Vendors will suffer the loss of game day revenue.

Innocent players will grapple with the pain of having a season axed without warning.

Most seniors will never don a helmet again.

Haverhill Superintendent Margaret Margotta reported that the locker room hazing incident caught on video tape was not an isolated action.

Lowell and Haverhill’s mayors both backed the Haverhill superintendent’s decision to suspend the Thanksgiving game.

Haverhill students expressed frustration that activities in addition to the football game were being cancelled. Innocent students were suffering. The pain cut especially deep coming in the aftermath of three years of activities reduced and cancelled because of covid.

The hazing incident caught on tape and broadcast nationally was appalling. The thought that this was not an isolated instance leads me to think that there are pervasive issues that need tackling.

Hopefully in years ahead, well after the guilty are punished, Haverhill residents will look back and realize that these incidences served as catalysts for change and improvement in the education system and overall community.

But today my overriding feeling, one shared by Haverhill friends I’ve contacted, is sadness.

As one former neighbor in Haverhill’s Acre texted me, “It sucks!”

My wife Katy called over to me from her recliner as she scrolled on her phone, “Here’s something!”

She airdropped a CBS Boston News Report to me.

WBZ general assignment reporter Juli McDonald  is beaming as she announces, “Thanksgiving will be saved!”

had arranged a game with the Winnicunnet Warriors of Hampton, New Hampshire at Lowell’s Cawley Stadium at 10 am on Thanksgiving Day, November 24, 2022.

The announcement warmed my heart.

Several Lowell players and a parent testified about what the rescheduled game meant to them.

McDonald summed up the report, “This save – priceless for seniors who will wear their jerseys and take the field together one last time after all.”