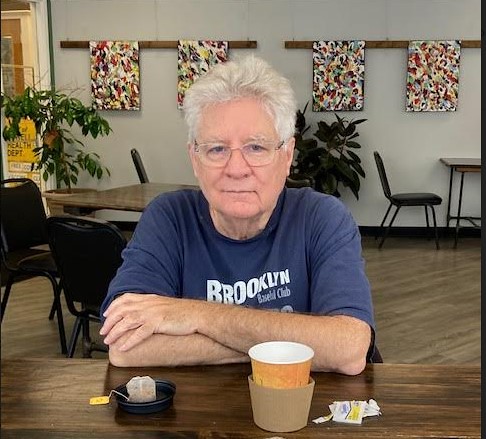 On a cool weekday morning in October, looking comfortably rumpled in jeans and T-shirt that reads “Brooklyn Wonders, Players League 1890,” Chaz Scoggins sits in the Purple Carrot café on Merrimack Street in Lowell and talks baseball. The MLB season isn’t over yet, the playoffs still scrapping toward resolution, but for Scoggins, who plans to head to Florida in a few days, it’s a done deal. After fifty years in baseball, as a newspaper beat writer and an official scorer for the Red Sox, he has just retired.

Sipping hot tea, Scoggins, 74, explains that it just seemed time. Forty-plus years with the Lowell Sun, most of it as a beat writer covering the Red Sox, overlapped with 44 years as an Official Scorer, all adds up to 50. “Sitting in the cold press box in April? The windows open due to Covid protocols? I won’t miss that,” he says.  Miss, maybe not, but his talk suggests there’s plenty he remembers.

“My very first game as a writer was the first game of the designated hitter, so we go back to the beginning.”

The official scorer thing “just kind of happened,” he says. “When people think ‘official scorer’ they think: Oh, you’re the one who changes the numbers in the old scoreboard in left field.” He’s referring to the relic from long before Jumbotrons. In Boston it’s part of the Fenway fable, with plenty of stories of its own, but that’s not what Scoggins means, and he gets into official scoring.

Baseball being such a game of numbers and stats, it’s important that an accurate record of each game be kept, and this is dependent on someone scoring each. Beginning in 1908 the Baseball Writers Association of America provided official scorers  to teams as a courtesy. “Prior to that, club officials decided hits, errors—and it wasn’t very standardized. As a courtesy, the reporters got paid a little money to do it, so they served as de facto official scorers.

“In late 70s that started to change when a number of baseball writers who were scoring got involved in the middle of no-hitters and you had no-hitters being broken up or continuing based on how things were scored. You had players complaining, challenging the scoring, so newspaper editors said, ‘look you guys are there to report the news not make it.” Gradually, many newspapers stopped their writers from scoring. The Sun didn’t seem to mind, so Scoggins  continued doing both.

“At first the argument was if you’re ticking off players because of the official scoring, they’re not going to talk to you. But given the personality of some Red Sox players in 70s and 80s,” Scoggins says with a grin, “sometimes the only way to get them to talk to you was to get them ticked off.”

Teams became responsible for finding their own scorers—often former amateur players, coaches. By the time he retired from the Sun in 2013 he was one of the very few active writers still scoring, although a number of retired baseball writers were still doing it. “We weren’t paid by teams, we were paid by MLB. We were contract employees. No benefits, we got paid only twice a year—at the All-Star break and end of the year. Then about few years ago, a case in California—one of these gig worker things—ruled that people working for you need to have benefits. At that point we became part-time employees. Just before Covid, scorers were declared parttime employees of MLB and every two weeks we got a paycheck.”

In addition, things got more organized. Each year, after Christmas, there were seminars in New York City for all scorers to gather and talk, look at video and discuss plays. When Scoggins traveled with the Red Sox in the 70s and 80s, scoring varied dramatically city to city. “It was always a subjective thing,” he says. “Plays in baseball are like snowflakes … no two are exactly alike. These seminars really standardized scoring all across the game. It’s still subjective,” he allows. “Players still appeal, and the scorers get overturned, but it’s much more even.”

By Scoggins’ math he scored 1895 games, including 54 in the post season, and 3 all-star games. And he probably had nearly as many stories to tell.

Like how on July 17, 1990 (he brings numbers to mind with the ease of a tax accountant), he saw the Twins’ Gary Gaetti start two round-the-horn triple plays against the Red Sox—the only time in baseball history a player turned two triple plays in the same game. (Alas, despite it, the Twins lost 1–0.) In the 1895 games he scored he saw only one no-hitter. Jon Lester in 2008 v. the Royals. “It was my 1465th game.”

In 1986 he scored Roger Clemens’ first 20-strikeout game. Back in those days they had official lineup cards, filled out by the managers, who would exchange them at the plate before a game. There were 2 originals and 6 carbon copies. They gave carbons to each other and kept one. The plate umpire got both originals, and the official scorers got the last 2 carbons. “At the end of a game, we’d throw them away. But after that Clemens’ performance, thinking this might be a good souvenir to have, I kept it. I later asked Clemons to autograph it, which he was happy to do. I framed it.” He reckons he might have the only existing copy of the lineup card of that game when 20 batters got caught in the Rocket’s red glare. Amazingly, Roger would do it again, 10 years later in Detroit.

“I had a lineup card from when Cal Ripken was breaking the record for consecutive games. And I scored his 1000th game in the streak.  After the game, thinking Ripken might like to have that card, I went down to the clubhouse and asked him and he said yes.”

All these years in baseball . . . the biggest thrill? It had to be the 1999 All-Star game in Boston, where MLB’s All-Century team was also being celebrated. It would be Ted Williams’ last visit to Fenway. Scoggins grows animated recalling the spontaneous outpouring of emotion when Williams was brought out in a wheelchair. “He was swarmed by all the other baseball legends, and the current All-Stars. It was a tremendous scene.”

Scoggins has a deep memory for names and dates and situations: “the bases were loaded” — “It was the second of a twi-night doubleheader” — “It was my 1089th game…” — “There was a rain delay”…. It’s a quality one would want in the person whose take on who did what in each situation of the games he scored will be the final record.

Note: The Houston Astros would go on to beat the Philadelphia Phillies in six games to win the 2022 World Series. To date, Chaz Scoggins has been silent on the matter.