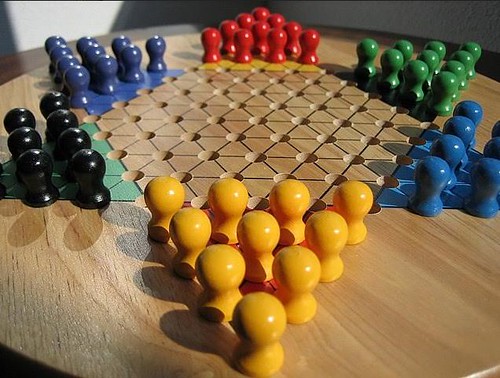 I’m not a fan of board games. I’ve always hated them, even when I was a kid.

When I was about seven years old, my sister Nathalie and I received a Parcheesi game for Christmas. If you’re not familiar with it, Parcheesi is Western adaptation of a game from India. The board’s playing surface is covered with a geometrical pattern made up of colored rectangles and circles. In order to play, one must navigate four playing pieces through these spaces, based on moves determined by rolling of a pair of dice. The goal is to get all four of your pieces into the home square in the center of the board before the other players. It sounds simple, but it is absolutely mind-numbing. Part of the problem is that the game is chock full of arbitrary and gratuitous rules that make it drag on for millennia. I won’t go into them, so you’ll have to trust me. But if you every try playing Parcheesi, you’ll know what I mean.

Another game that makes me wish I were comatose is Chinese checkers. It’s not as bad as Parcheesi, not by a long shot, but it’s still pretty tedious. (This is the game with the star-shaped board where the objective is to get a bunch of marbles over to the opposite side of the board.) I’ve never understood the point of this game. It’s not even remotely enjoyable. (Even if it were fun, if you bump the board even slightly the marbles roll all over the place, and good luck remembering where they were.) We’ve had a Chinese checkers game out on our screen porch for the last ten years. I’ve never touched it other than to occasionally dust if off.

When my daughter, Madelaine, was little, she loved playing Candy Land. (I’m not sure who gave us the game, but someone did because I know I didn’t buy it.) I did my best to play this game with her and for the most part I did so cheerfully. The problem with Candy Land, though, is that, not unlike Parcheesi, it can take forever to finish. You’ll be three spaces away from the Candy Castle at the end and wham! You pick a card that says “Go Back to Gumdrop Mountain” or to some other confectionary location near the beginning of the board, and you basically have to start the whole game over again. It makes you want to cry.

As an adult, one of the worst things that can happen is to be invited over to someone’s house for a “game night.” Normally, I decline these invitations, if I receive them at all, which I don’t for the most part. People who know me don’t ask me to play games with them. But once in a great while I’ve showed up at someone’s housing thinking we were going to do something civilized like talk to one another or watch a movie or a Red Sox game, and they’ll say, “Hey, I have a great idea!” and then drag a Monopoly game out of their coat closet. There isn’t enough popcorn or sauvignon blanc on the planet to make this OK. I love my friends, but no.

The one exception to my board game aversion was checkers. When I was five or six years old, I discovered that I could beat adults at checkers on a fairly regular basis, which I liked. So, for a short period of time I dragged a checkers game around with me just about everywhere I went and made anyone I met over the age of fifteen play a game with me. These poor people might have been letting me win, but I don’t think so because after a while most of my grown-up victims were sick of checkers. If I had been losing, I’m pretty sure I would have lost interest in the whole thing a lot sooner.

Occasionally, a well-meaning person will ask me if there are any games that I like. The best way I can answer this question is that there are some games that are “better” than others, and if I had no other choice but to play one, I’d choose a game from this category. Among these “better” games are things like Jenga, Pictionary, Trivial Pursuit, and Scrabble, which I think might not disturb me as much as some games do because playing them requires some creative thought. But given a choice between playing one of these and starting into space for an hour, I’d still probably choose the latter.

I’ve often wondered why other people like playing games, and why I have such a hard time with them. My daughter would say it’s because I’m a Capricorn—work- and result-orientated—and games, to me, represent time wasted. While that might be partially true, I’m not sure that’s it. I like having fun just as much as anyone else. It’s just that my idea of a good time has nothing to do with rolling dice, following rules, or counting squares.

I’ll probably never know the answer to either of these questions, but I can live with it. Just don’t ask me to play Yahtzee.