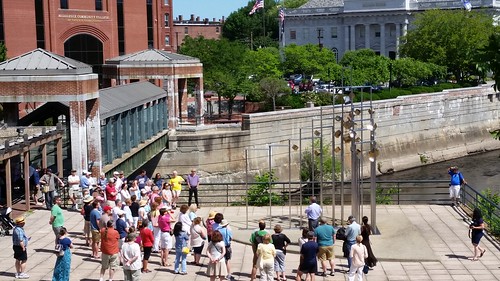 Next Saturday, August 13, 2022, at 10 am from Lowell National Park Visitor Center at 246 Market Street, I’ll lead a Lowell Walk on the founding of Lowell. Here’s a preview:

Rivers have always been central to human activity and with the Merrimack and Concord Rivers meeting here, people have always been drawn to this vicinity. By the time the first Europeans arrived in the 1630s, Indigenous people had established two villages, one called Wamesit on both banks of the Concord where it flowed into the Merrimack; and a second called Pawtucket next to the falls on the Merrimack that shared the name. [Or that’s what the English later called the two settlements. One of the great challenges for historians of this period is that the story of the Indigenous people as told by them has not survived so we are left with biased accounts by English writers that may or may not be accurate. But that is what we have].

For several decades in the early 1600s, transient hunters, traders, and ministers traveled here to interact with the existing residents. In 1653, however, a group of English families from Woburn and Concord ventured up the Concord River and established a settlement they called Chelmsford just to the west of here. The Indigenous residents and the English settlers co-existed, mostly peaceably, until 1676 when King Philip’s War transformed relations between the two groups. This caused the surviving Indigenous residents to abandon their land here and relocate to Canada. As they departed, their leader, Wannalancit, executed several deeds which transferred ownership of the land on which the Indigenous people’s villages had stood to several residents of Chelmsford.

A few families built houses on this newly acquired land but it was mostly used for pasture and some farming. While the eastern boundary of Chelmsford at that time has never been clearly established, it most likely ran along today’s Stevens Street from the Merrimack River to Industrial Ave and then followed River Meadow Brook to the Concord River. Everything to the north and east of that angle was the Wamesit settlement (i.e., today’s downtown, the Acre, and the lower Highlands) while Chelmsford was to the south and west.

Over time, pockets of early industry emerged along both rivers with one concentration in Middlesex Village (roughly where Hadley Field is today) and another along River Meadow Brook as it flows towards and into the Concord River. But not much about the area that became Lowell changed for nearly 140 years.

In November 1821, a group of men who were looking for a site suitable for a large textile manufacturing facility came to the Pawtucket Falls. They saw great potential here for tremendous hydro power generation, and quickly bought up the land and water rights. Work began on the first mill and the first power canal in 1822 and the first loom of the Merrimack Manufacturing Company began weaving in the fall of 1823. Everything then was still part of Chelmsford but the political needs of this major manufacturing enterprise quickly diverged from those of agrarian Chelmsford and so the mill owners petitioned the state legislature for a charter for a new town. That was granted, effective April 1, 1826, and Lowell officially came into being on that day.

The walk on Saturday will review the above and then fill in many of the details from the time of the 1821 visit to Pawtucket Falls up to the receipt of the charter in 1826.

2 Responses to Lowell Walks: The Founding of Lowell