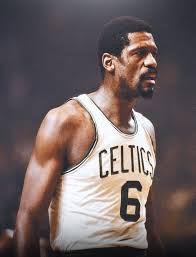 As a youth I grew up watching the Boston Celtics dominate the NBA. Eleven World Championships in thirteen years. I can’t remember for sure something like that, I think. But of all the NBA championships and winning seasons I followed, the Celtics’ 1968-69 season I remember the most. That season and Bill Russell (the Celtic’s legendary center) gave me my most vivid sports memory. The Celtics finished the 1968-69 season winning only 48 games, earning a poor fourth place in the Eastern Division standings. The team barely made the playoffs and most experts predicted the post-season would be over quickly for the Celtics. Bill Russell was 34 years old and about to retire. But surprisingly, against all odds the Celtics did win the NBA Championship in 68-69. But that championship isn’t my most vivid sports memory. Truthfully, I can’t even remember who the Celtics played in the 68-69 Finals…maybe the 76ers, the Knicks or the Lakers, I don’t know, I can’t remember…but I can remember an image of Bill Russell during the playoffs that has stayed with me for over 50 years. It was the seventh and deciding game of the NBA Finals and the Celtics were ahead. Astonishingly, these underdogs were on the verge of winning another Championship. I can still visualize Russell as if it were yesterday. During a time-out with seconds left in the game, Russell stood under the basket, slightly slouched with both hands on the respective thigh. His head tilted up toward the basket revealing his signature goatee and focused eyes. The character his face displayed in that moment has lasted far beyond a childhood memory for me and become a life lesson. Russell didn’t care that others doubted or questioned him. He gave his all. He fought the good fight in all aspects of his life. I can see that image of Bill Russell right now. Even after 50 years it stays with me because it is the image of “a real Champion”.