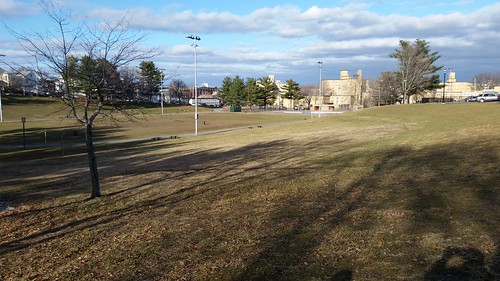 The 1922 Annual Report of the Board of Parks of the City of Lowell lists the following parks as being owned and maintained by the city. After the name of the park, is its size in acres (according to the report), a description of where it is or was located, and any other relevant information.

Boulevard Park – 6.03 acres – I believe this is what is now known as the Vandenberg Esplanade on the north bank of the Merrimack River.

City Hall & Memorial Building grounds – 0.5 acres – This would be the grassy area around City Hall and the Library although it would not include today’s JFK Plaza which was added in the 1960s as part of the Northern Canal Urban Renewal Project.

Coburn Square – 0.25 acres – This small park is at the corner of Stevens and Chelmsford Streets. The Coburn family is prolific in the history of Lowell. One of its members owned and lived on a large farm in this location.

Colonial Ave Riverbank – 3.5 acres – This is the north bank of the Merrimack River opposite the North Campus of UMass Lowell running from the Howe Bridge to the Cox Bridge.

Corner Rogers & Nesmith streets – 0.01 acres – This is essentially a traffic island that still exists today at the merger of Nesmith Street into Rogers.

Fayette St. Playground – 0.17 acres – This is on the east side of Fayette Street between Chestnut and Church streets. In 1922 there was a swimming pool on the parcel; today there’s a basketball court.

First Street Oval – 12.3 acres – This park was east of Bridge Street on the north bank of the Merrimack. It was discontinued when the Lowell Lawrence Boulevard was constructed.

Franklin Square – 0.06 acres – Not yet identified.

Glacial Oval – 0.01 acres – this is a small circle of grass with a boulder in the middle. It is located on Glacial Ave which runs south from Westford Street between Stevens and Wilder. The former Montefiore Synagogue is also on Glacial Ave.

Harris Oval – 0.12 acres – This is the interior of a small traffic circle at the intersection of Harris Ave and D Street in the Highlands.

Highland Park – 5.55 acres – This park is bounded by Stevens, Parker, Wilder and B streets and was acquired by the city in 1922. In 1966, it was renamed Callery Park in honor of William Callery, a neighborhood resident who was killed in action in Vietnam while serving with the US Army.

Hillside Park – 0.06 acres – This is a small triangle for grass on Parker Street where it splits with Plain Street near the Laura Lee School in the Highlands.

Hovey Square – 0.01 acres – This is a small traffic island at the intersection of Hovey, Butman and Holyrood in Belvidere.

John T. Durkin Playground – 1.53 acres – On Chelmsford Street next to the Lincoln School. It’s named for John T. Durkin who died while serving with the US Navy during World War I.

John J. O’Donnell Playground – 10.66 acres – On Gorham Street next to the Butler Middle School. It is named for John J. O’Donnell who was lost at sea while serving with the U.S. Navy during World War I.

Mansur Square – 0.05 acres – Triangle at the intersection of Mansur Street and Parkview Ave.

Parker-Spalding Park – 0.04 acres – Not yet identified.

Penniman Square – 0.05 acres – A triangle formed by Pine Street and Liberty Street in the Highlands. Granted to the city by Valentine Wilson and George F. Penniman in 1880.

Princeton Square – 0.03 acres – A triangle at the northeast corner of the intersection of Princeton Boulevard and Baldwin Street.

Shedd Playground – 56.0 – Located at Rogers and Boylston streets. Gift to the city from Freeman Shedd in 1910.

Wannalancit Park – 1.08 acres – Not yet identified.