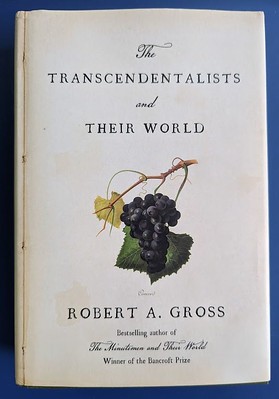 Review of The Transcendentalists and Their World

Book by Robert A. Gross
Review by Richard Howe

Most people see history as permanent and fixed in time. Something happened in the past and those in the present tell the story about what happened. Only that’s not what history is or how it works. History is always shaped by the perspective of the person telling the story. Sometimes the telling of the story is intended to make a point about present day politics; other times the bias in story telling may be unintentional, but it’s always biased. The challenge for the consumer of history is to identify the bias of the storyteller and to factor that into the receipt of the story.

Despite story-teller bias, those who “do history” try to make it as accurate as possible since their work will be reviewed and critiqued by other historians. To get that accuracy, the historian relies on evidence. Historical evidence can take many forms: a diary, a letter, a photograph, or a video recording are a few examples of historical evidence. However, a flaw in this methodology is that not everyone left letters or diaries or photographs. Throughout human civilization most people have been too busy trying to survive to have written things down, even if they could write, which most could not. Consequently, history has primarily been told from the perspective of the wealthy and the well-educated, the people who left behind “the evidence.”

In the 1970s, historians recognized this disparity and began focusing on those whose stories had not been told, the stories of ordinary people. The challenge for historians was where to find the evidence to use in telling these stories. That quest gave us “the new social history” which relied on nontraditional sources to tell the stories of those previously omitted.

In 1976, Robert A. Gross employed the methods of social history in The Minutemen and Their World, a book based on his Ph.D. dissertation at Columbia. Coming in the country’s bicentennial year, The Minutemen was a huge success and won the prestigious Bancroft Prize. Gross used tax, probate, real estate and other bureaucratic records to tell the story of the people of Concord, Massachusetts, at the start of the American Revolution. HIs granular portrait of the everyday lives of the town’s residents provided fresh insight into the causes and consequences of the Revolution.

Now, 45 years later, Gross has published a sequel to The Minutemen. His new book, The Transcendentalists and Their World, uses the techniques of the earlier book to look at Concord in the 1820s and 1830s. The story he tells is of a world transformed by technology and capitalism.

Founded in 1635, Concord was the first inland settlement in Massachusetts. The strong religious and communal ties of the Puritans helped the community survive and grow. These circumstances persisted in April 1775 and afterwards. If you wanted to be part of the community, you worshiped at the same church, voted for the same candidates, and patronized the same stores.

By the 1820s, however, these ties had loosened. Disagreements in the form of church worship led some residents to leave the established church and start new ones. As the portion of the continent occupied by European immigrants expanded, many young people felt stagnant in Concord and moved westward for new opportunity. Those who stayed became disenchanted with the local elite who saw themselves as sacrificing their time and effort for the good of all but whom others saw as motivated by self-interest rather than community spirit.

It was in this setting that Ralph Waldo Emerson emerged as a voice for the individual. Survival and success no longer depended on conformity with the established way of doing things. Each person should be free to act on his or her own. Yet Gross views Emerson as a slightly flawed evangelist of individualism. Emerson’s tardiness in speaking out against slavery and his embrace of insider status in town affairs showed a “do as I say, not as I do” approach. For Gross, Henry David Thoreau was a better avatar of emerging individualism.

Emerson and Thoreau may be the best known actors in this tale but they are not the only characters in this book. The immersive research done by Gross creates a feel for what life was like for all classes of people in Massachusetts in the 1820s and 1830s. This is a bonus for anyone interested in the history of Lowell since the city came into existence and grew explosively during this time. Indeed, Lowell is frequently mentioned as a major threat to Concord’s well-being and status. The mills of Lowell dwarfed manufacturing in Concord and the city’s rising political clout allowed it to prevail in struggles with Concord over where court sessions in Middlesex County would be held. Since before the Revolution, much of the legal community of Massachusetts gathered in Concord in the spring and fall for weeks at a time to process accumulated litigation. This gave Concord, a town of 2,000 inhabitants, outsized influence in the Massachusetts political universe and also created valuable economic activity. But by 1836, Concord lost out and the Middlesex County court sessions previously held in Concord shifted to Lowell.

However, we should shed no tears for Concord. The town carried on and, thanks to Emerson, Thoreau, and other resident writers such as Louisa May Alcott and Nathaniel Hawthorne, Concord gained new life as the center of Transcendentalism in the United States.

As someone very interested in this period in Massachusetts, I very much enjoyed this book and urge anyone with like interests to read it, however, when it comes to casual readers, the level of detail contained in the book might be a bit much. The New York Times book critic John Williams made this point in his recent review of The Transcendentalists. Williams commended Gross for the depth of his research but also suggested there was perhaps too much detail. Gross masterfully points out “the big picture” in religion, culture and industrialization, but those big picture views are separated by many pages of hyper-detailed facts that may be fascinating to other historians but a bit too much for ordinary readers.

One Response to Review of The Transcendentalists and Their World