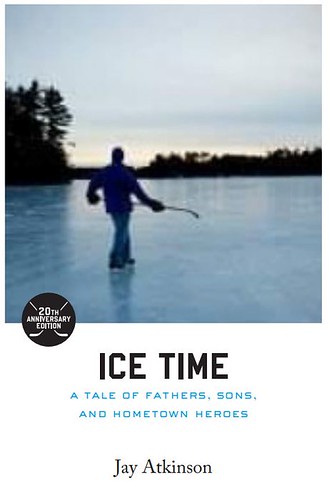 “Hockey gets in the blood—you develop an intense passion for the game, and either you leave it—too many early mornings, bus rides, urine-smelling rinks—or you just love it.”

Jay Atkinson is author of eight books, including the bestselling Legends of Winter Hill and the prize-winning Massacre on the Merrimack: Hannah Duston’s Captivity and Revenge in Colonial America. A new collection of stories, The Tree Stand, will be published in October by Livingtson Press. I sat down with Atkinson recently to talk about his book Ice Time: A Tale of Fathers, Sons, and Hometown Heroes, newly reissued in a 20th anniversary edition, and his friendship with his mentor and writing teacher, Harry Crews.

David Daniel: In his foreword to the new edition of Ice Time, Peter Fornatale, remembering first seeing it, as a junior editor at Crown, writes, “I was immediately transfixed by Jay Atkinson’s clean, muscular prose, and I could tell from skimming the first pages that his blue-collar, hockey-obsessed New England town was going to be an exciting storytelling milieu.”

Jay Atkinson: He came to Methuen in 2000 for the original book party for Ice Time. It was at the American Legion hall (laughs, remembering)—my rugby friends came, a lot of the teachers and coaches from high school came.  Pete came up from New York. That was the first time we met in person, other than when I went to NY when he bought the book. He was a young New York guy, grew up on Long Island, and he was taken with the northern Massachusetts rough-around-the-edges humor, the Boston-esque accent and sardonic humor. “No wonder you write about this,” he said. I told him I don’t know anything else.  A lot of my stories are set in the Merrimack Valley. I need to anchor the work in my home ground, which is something I learned from Harry Crews. The ground that you sweated and bled into is the ground you should write about. In this case, the hockey rinks you bled onto. (Laughs.) Which I have.

At that time, the late 90s, I was doing features for the Globe, outdoor stories, literary stuff, writing for magazines. I had a new novel I wanted to shop. I’d sent a copy of my first published novel, Caveman Politics, to the Michael V. Carlisle Agency and they liked what they saw and asked one of their  agents to reach out. So, I got a call from Neil Bascomb—probably their youngest agent. We’ re talking on the phone—our first time—and he asks what I’m working on. I told him I have this idea for a magazine story,  said I’d like to do the “Friday Night Lights” of hockey. This is twenty years after I’d played on the first team ever from Methuen High School, and I explained I’d go imbed myself—and before I even finished the second sentence, he said, “That’s a book. That’s what you should do next.”  Not the novel I was trying to get them to represent. “If you could get total access…” Which I could. I knew everybody in town. I wrote up a proposal and it happened. Next thing you know I’m going to NYC and having all these meetings, talking to editors. Several publishers were interested and the advance offers were all in the same ballpark but Pete Fornatale at Crown was the guy I wanted to work with.

DD: That was twenty years after you’d played, and the book came out twenty-five years after. Now fast forward twenty years since the book’s publication, and you’ve got a 20th anniversary edition.  That has to feel good.

JA: Pete Fornatale made it happen. He was like the angel investor. He said this book deserves another life. He got the rights from Crown. Got the electronic file. I played for the team in 1975, so, yeah, forty-five years. Pete reached out of the blue. He’s long gone from Crown. Said he was going to start this company PTF Press and publish only books he really likes and said, “What do you think?” He’s a one-man operation . . . and there ended up being a lot more work. But it’s out now.

DD: You speak often about Harry Crews—who, by the way, was featured in a recent New Yorker piece. He’s been an important figure in your life . . .

JA: Yeah. After I graduated from college in Nova Scotia, I enrolled at University of Florida. It’s funny, in years since, I’ve met people who went there specifically because of Harry Crews. I didn’t even know of him back then. It was an accident I got to know him. He’s a definitive authority on narrative structure, voice, character development, use of dialogue. Other than my father, he’s had the most influence on me of any man I’ve ever met. On a lot of levels, we had very little in common—he’s a Southerner, I’m a New Englander. We had a brusque first meeting. He’s a man with his emotions on his sleeve, a bit of a loose cannon. The first meeting in class I had just come from rugby practice, I had a black eye and it was my first week of playing rugby for the U of F team that ended up being a big part of my life. He spoke with a deep Georgia accent that was hard for me to understand, so I asked him to repeat something, and he must’ve taken it wrong. My first time in his creative writing seminar and he challenged me to a fist fight. I’m thinking, like what kind of a fucking college is this? Because at Acadia it’s guys from England and Wales and Scotland, they’re all super-genteel guys in tweed jackets. So, Harry says, “I don’t fuckin’ like your accent, let’s go out and settle this.” I said, “Okay. Let’s go.” He liked that.

He outweighed me by fifty pounds. But he was heavyset, a drinker, I figured I could just wear him down, like rope-a-dope. Everyone in class was shocked. As we start walking out, a classmate—a quiet-spoken Army Vietnam vet named Costello who I’d spoken to only a couple times and who knew Harry—says, “Harry what are you doing? The guy’s new to the class. He didn’t understand what you were saying.” Harry had been a Marine.  “Yeah, well I don’t fuckin’ much like his accent, either. What do you think of his accent?” Costello looks him in the eye and says, “It’s memorable. Just like yours.” Perfect. Harry backed off, and commenced the class. He asked if anyone had brought a story to read. No one spoke up. I said I have one.

DD: And you read it?

It was about a fistfight I’d been in college in Nova Scotia. A guy picked it with me. I ended up getting the better of him. It made a big change in my life. All of a sudden, I was universally accepted by everybody in the athletic community there. You know, ‘He’s the guy that beat up that guy.’

Harry listened, head down the whole time, occasionally nodding. When I finished, he leaned across the conference table. He’s six feet, long arms. I’m seated, he extends his hand. (Imitating gruff voice) “My name’s Harry crews. We’re gonna get along just fine, Slick, just fine.” And we did. I spent six semesters in the writing workshop, and on Friday afternoons, when he was in his office I go and see him. I tell my students (at BU), if you want to learn storytelling, you should come hang around my office. I went by Harry’s over the course of a year-and-a-half—maybe twenty times—where it was one on one. He knew I respected the craft.  After I left the program, we’d be in touch intermittently. And I saw him one more time in person, two years before he died. Visited him in Gainesville. That was the last time I ever talked to him. So, yeah, I talk about him because he taught me a lot.

DD: You were a collegiate two-sport athlete. Talk about the Skate & Read youth hockey program you founded in your hometown.

JA: One of the things I realized is that I’m in a different world athletically than I used to be. I’m not playing full contact hockey and rugby anymore, but I’m mountain biking, open-water swimming, hiking, some trail running. I went rock climbing recently for a story I’m writing for a magazine. So, I still have an athletic career going at my age, but when I think back, the two great loves of my life were rugby and hockey. Once I couldn’t play competitively anymore—after I left Canada, where I’d played at a certain level, I just played men’s leagues. Hockey gets in the blood—you develop an intense passion for the game, and either you leave it—too many early mornings, bus rides, urine-smelling rinks—or you just love it. Writing the version of Ice Time that was published in 2001, I loved skating with the kids every day, I’d be on the ice every day,  gym class and everything. I wanted to be able to keep doing this, so I thought I’ll just start my own youth hockey program.

My son is autistic and has a disability. The youth hockey coaches were ignoring him because he wasn’t going to be a big star in high school; but I knew he could learn to skate well enough to play the game. I said, screw these guys, I’m going to form my own program. In 2001 I didn’t realize any of this. I figured I was  just creating Skate & Read as a way of keeping my connection with the high school, that I was getting a chance to be nostalgic about the year I played in high school. But now, writing the epilogue to the new edition of Ice Time, I realize that the book is a paean to my love of the game, and how I share that love of the game with people through Skate & Read. The goal is to perpetuate the love of the game in our town. I’m paying my respect for how much I got out of the game, staring when I was thirteen— being a goalie and playing with twenty-year-olds. That was an experience I wrote about when I was in Harry’s class. It was the only story I ever wrote that he ever liked.

So, Pete coming around with this offer to republish Ice Time had given me the perspective, and I can now contemplate why it’s important to me that the book is rereleased, why I’m still doing the fun league twenty years on. The book taught me that reason. A chance to mentor players to coach and, in turn, mentor the kids below them, the five and ten-year-olds. To respect the game and play for the love of it. And this ties in with my passion for writing. It all comes full circle.