As part of yesterday’s Juneteenth Festival, the Lowell National Historical Park hosted a Lowell Walk on Black History in Lowell. It was led by Maritza Grooms and Bob Forrant and was attended by nearly 50 people. Here are some photos and a summary of what was said at each stop: 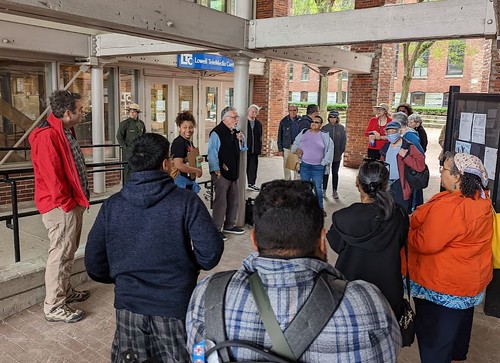 The mill buildings that house the National Park visitor center were constructed in the 1830s as the Lowell Manufacturing Company, one of a half dozen of large mill complexes in the city. On the eve of the Civil War, the mills of Lowell in the manufacturing process consumed 400 tons of cotton each week. The cotton economy and system of slavery that propelled it were growing, not recessing, so slavery was not going to go away gradually. Also of note, the mills of Lowell made cotton cloth of all grades and qualities. The Lowell Manufacturing Company made inexpensive, rough but durable cotton cloth which was mostly shipped back to the south where it was made into clothing for enslaved people picking cotton. 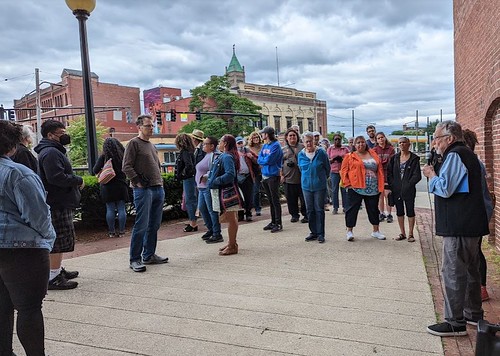 The cream-colored brick building in the background on Dutton Street near Merrimack was known as Mechanic’s Hall. It was jointly constructed by the mill owners and the (skilled) mill workers to help advance the knowledge and capabilities of the city’s skilled workers. There was a library and an assembly hall where public programs were held. Among those who spoke there was Frederic Douglass who visited Lowell frequently. The first-floor spaces of the building were rented to retailers, one of whom was Nathaniel Booth, a formerly enslaved Black man who had escaped to the north and who operated a barber shop in Mechanic’s Hall. When the Fugitive Slave Act became law in the 1850s, Booth fled to Canada to escape recapture and return to the south. The people of Lowell, led by mill agent Linus Childs raised sufficient money to purchase Childs’ freedom so that he was able to return to Lowell. Mechanic’s Hall became a hotbed of abolitionist activity in Lowell with copies of William Lloyd Garrison’s The Liberator newspaper always available there. 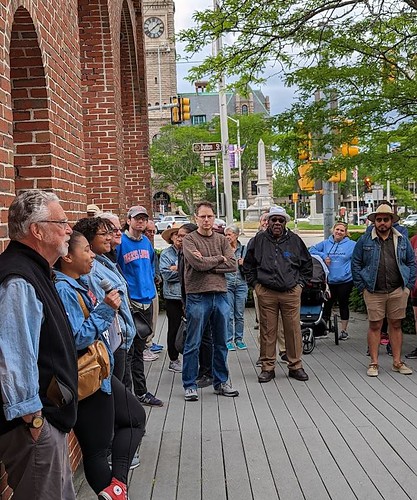 The plaza at the corner of Dutton and Merrimack streets diagonally across from City Hall was the site of Huntington Hall which served as the city’s main train station and as a large public auditorium. It was from her that the Sixth Massachusetts Regiment left Lowell in April 1861 at the start of the war. Across the intersection of Merrimack and Dutton is Monument Square, the small triangle of grass in front of City Hall. The obelisk monument there is called the Ladd and Whitney monument in honor of Luther Ladd and Addison Whitney, two volunteer soldiers of the Sixth Regiment who were killed in a riot in Baltimore on April 19, 1861, as the regiment made its way to Washington. Ladd and Whitney were two of the first soldiers to be killed by hostile fire in the Civil War.

Also at this stop on the tour we heard more recent history of the Black people of Lowell including the story of Birdie Malbory, a Black woman who ran for the city council in the late 1970s, and of the Hale Howard and Central Plaza urban renewal projects that displaced the residents of established Black neighborhoods without regard for where those residents would live after their homes were demolished. 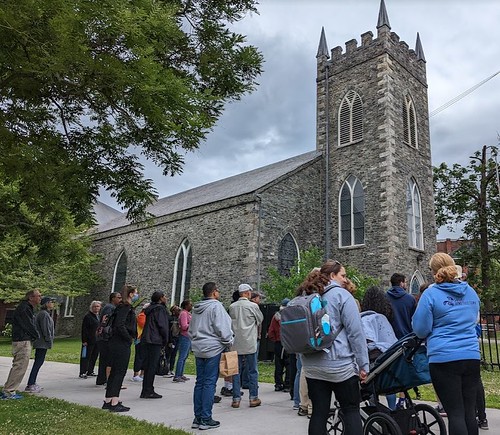 Across Merrimack Street from St. Anne’s Church is the headquarters of Enterprise Bank. That building was constructed as Lowell’s first City Hall. The public hall on the second floor was available for non-governmental events. In the 1830s, an abolitionist from England named George Thompson came to Lowell to lecture on the evils of slavery. He drew a large audience including many young women mill workers but also caused a large demonstration of people opposed to the abolitionist movement. On the second night of Thompson’s program, the demonstrators grew more numerous and violent, throwing bricks through the open window of the lecture hall. One brick narrowly missed Thompson’s head and he cut short his talk.

St. Anne’s Church was constructed in 1824, two years before Lowell received its town charter. It was built of “rubble stone” excavated from the canal beds and was modeled on a church in Kirk Boott’s ancestral home in England. The church’s congregation included mill managers and mill workers. Many of the latter were active in the Lowell Antislavery Society which was led by the church’s minister, Rev. Theodore Edson. During the decades before the Civil War the church also was a stop on the Underground Railroad with those fleeing slavery hidden in the unfinished basement of the building. 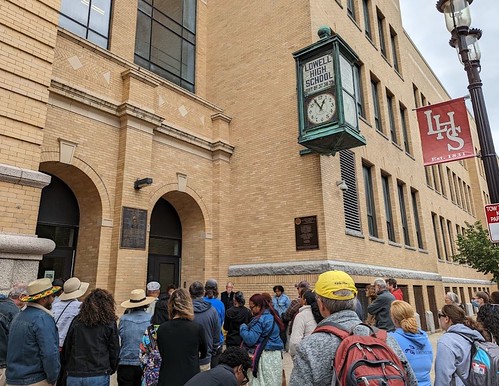 Lowell High School was founded in 1831 and is thought to be the first co-educational and integrated public high school in the United States. Caroline Van Vronker was born in Lowell on August 26, 1830. She was the first Black person to attend Lowell High School. We also heard about the Lew Family which began with Primus Lew of Groton, a former servant who served in the French and Indian War and then became a prominent farmer in Groton. His son, Barzillai, moved to the part of Dracut that is now the Pawtucketville neighborhood of Lowell. He served in the American Revolution and after the war owned a large farm in Pawtucketville. His son, Erastus Lew, owned a house (that still stands) on Mt. Hope Street that served as a stop on the Underground Railroad. Another descendent, Harry “Bucky” Lew became the first Black professional baseball player in the United States. Still another descendent, Teresa Garland Lew became the first Black person to be a public school teacher in Lowell. 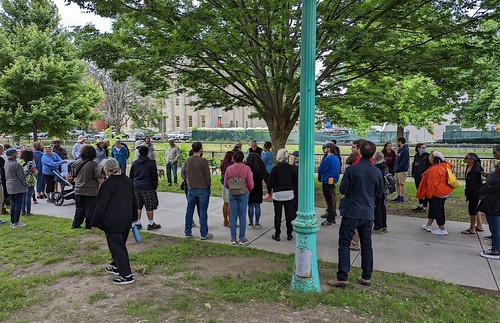 In their concluding remarks at Lucy Larcom Park, Bob Forrant praised Martha Mayo, the retired director of the UMass Lowell Center for Lowell History who exhaustively researched and documented the history of Black people in Lowell. Her research provides the content of much that was covered on today’s tour.

Bob also explained that people in Lowell have nominated several sites in the city including Mechanic’s Hall to be officially named sites on the National Park’s National Underground Railroad Network to Freedom.

One Response to Juneteenth Walk in Lowell