On June 6, 1944, American, British, and Canadian troops landed on the shore of Normandy while airborne troops arrived inland. The great battle to seize back northwest Europe from the Germans commenced.

As with every other battle in World War II, men from Lowell were involved in D-Day. First Lieutenant John J. Shaughnessy of Company H, 16th Infantry Regiment, 1st Infantry Division, was killed on the invasion beach.

I wrote about Lt Shaughnessy yesterday so please check out his story. Today, in a combination Memorial Day – D-Day remembrance, I write about some of the men from Lowell who died in Europe in the months after the D-Day landings. 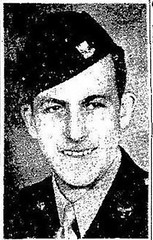 Paul J. Nadeau was born in Lowell on July 5, 1921. His mother was Sylvia M. Nadeau and his father was Joseph A. Nadeau. Joseph died in 1933, his life shortened by injuries he sustained in a poisonous gas attack while serving in France with the 26th Division during World War I. When Paul registered for the draft on February 16, 1942, he was 20 years old, was living with his mother at 26 Fisher Street, and worked at Wannalancit Textile Company on Jackson Street. He enlisted in the US Army Air Corps on December 16, 1942, and was trained as an aerial gunner. He was assigned as a “waist gunner” to a B-17 heavy bomber of the 337th Bomb Squadron of the 96th Bomb Group in England. On his 21st mission while flying near Karlsruhe, Germany, another bomber in the formation collided with Nadeau’s aircraft and sliced it in half. Nadeau and five other members of the crew died in the collision while four of the crewmen parachuted to the ground where they were taken prisoner by the Germans. The Germans notified the International Red Cross of the status of the crew and that news eventually made it to their families. Mrs. Nadeau learned of her son’s fate on June 30, 1944. Besides his mother, Paul Nadeau was survived by a brother Alfred and sisters Rita Nadeau and Mrs. Pauline Gagnon. Nadeau’s body was eventually returned to the United States. He is buried in St. Joseph’s Cemetery in Chelmsford. In 1947, the city of Lowell dedicated the intersection of West Sixth and Ennell Streets Paul Nadeau Square.

Joseph J. Lachance was born on August 7, 1908, in St-Boniface-de-Shawinigan, Quebec, Canada. His parents, Ferdinand “Frank” Lachance and Anna Lachance moved to Lowell with Joseph and their two other sons and lived on Moody Street. Joseph was working in a shoe factory when World War II began. Although he had never become a US citizen, Joseph enlisted in the US Army on September 29, 1942. He was killed in action in France on June 12, 1944. He is buried in St. Joseph’s Cemetery in Chelmsford. On Memorial Day in 1948, the city of Lowell dedicated the intersection of Merrimack and Suffolk streets Joseph Lachance Square.

Alphage L. Laporte was born in Lowell in 1922. When World War II began he was working in a textile mill in Lowell. He enlisted in the US Army on October 27, 1942, and was assigned to Company E, 22nd Infantry Regiment, 4th Infantry Division. His company landed on Utah Beach on D-Day and was involved in heavy fighting over the next few weeks. In this fighting, Private Laporte was severely wounded and died of his wounds on June 14, 1944. He is buried in the Normandy American Cemetery. In 1947, the city of Lowell dedicated the intersection of West Fourth and Albion streets Alphege Laporte Square.

Edward Desmarais was born in Lowell on May 25, 1911. In 1935, he married Doris Couilliard. They had a son, Edward Jr. When he registered for the draft in the fall of 1940, Edward worked for Canada Dry Ginger Ale in Chelmsford. He and his family lived at 40 Wilbur Street (which is off Stedman Street). Edward enlisted in the US Navy in 1943 and was assigned to a Construction Battalion (CB, better known as “Seabee”) which landed in Normandy on D-Day. He was killed in action on June 15, 1944, during the assault on the fortified port city of Cherbourg. He is buried in the Normandy American Cemetery. His name is included on the Middlesex Village World War II Memorial at Hadley Field. 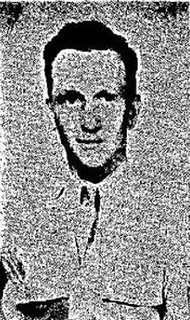 Robert M. Gauthier was born in Lowell, the son of Fred and Anne Gauthier of 24 South Walker Street. Robert enlisted in the Massachusetts Army National guard in January 1941. He was commissioned as a lieutenant and assigned to the 34th Field Artillery Battalion of the 9th Infantry Division. He saw combat in North Africa, Sicily and Italy. His unit landed on Utah Beach on D-Day. He was killed in action during the attack on the fortified port city of Cherbourg. He is buried in the Normandy American Cemetery. In 1947, the city of Lowell dedicated the intersection of Pine and Liberty streets Robert Gauthier Square.

Armand Masse was born in Montreal on June 23, 1920. He and his family moved to Lowell. When he registered for the draft in the summer of 1941, he lived with his mother, Mary Masse, at 181 Mt. Vernon Street and worked as a spinner at the Pacific Mills in Lawrence. He enlisted in the US Army on May 4, 1942, and was assigned to Company I, 32nd Armored Infantry, 3rd Armored Division. His unit came ashore in Normandy about a week after D-Day but it then led the breakout from Normandy and was engaged in heavy fighting throughout the summer. Armand Masse was killed in action on July 30, 1944. His body was returned to the United States in 1948 and he was buried in St. Joseph’s Cemetery. In 1964, the city of Lowell dedicated the intersection of Branch and Coral streets Armand Masse Square.