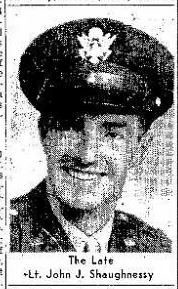 John J. Shaughnessy was born in Lowell on October 16, 1917, the son of Edward and Anna O’Donnell of 1091 Gorham Street. He graduated from the Sacred Heart School and Lowell High School. On October 16, 1940 – his 23rd birthday – Shaughnessy registered for the draft at the Elks Club on Hurd Street. At the time, he was 5’11” tall, weighed 148 pounds, and had blue eyes and brown hair. He worked as a foreman at the Megowan-Educator Food Company on Jackson Street where the famous “Crax” crackers were produced.

Shaughnessy enlisted in the US Army on November 19, 1940 and was assigned to the First Infantry Division which was then based at Fort Devens. He entered the Army as a private, but eventually became an officer. In 1942, Shaughnessy landed in North Africa and was wounded in the fighting there.

By D-Day, Shaughnessy was a First Lieutenant and the executive officer of Company H of the 16th Infantry Regiment of the 1st Infantry Division. On June 6, 1944, his regiment was in the first wave landing on the eastern part of Omaha Beach.

The opening sequence of the 1998 film Saving Private Ryan follows a company of US Army Rangers led by the character played by Tom Hanks landing on Omaha Beach. The Rangers were a small, specialized outfit and while they were indeed present that day, the bulk of the troops around them were from the 16th Infantry Regiment, including Lt. John Shaughnessy. The devastating casualties depicted in the movie reflected what happened that day. Among those killed in the landing was Lt. Shaughnessy.

Lt. Shaughnessy’s body was returned to Lowell and a funeral service was held at the Sacred Heart Church on December 9, 1947. He is buried in St. Patrick’s Cemetery.

In 1957, the city named a newly built school on Gorham Street the John J. Shaughnessy Elementary School. Coincidentally, the school was adjacent to O’Donnell Playground which was named for John J. O’Donnell, a sailor who died during World War I. O’Donnell was Shaughnessy’s uncle and Shaughnessy was named for him. 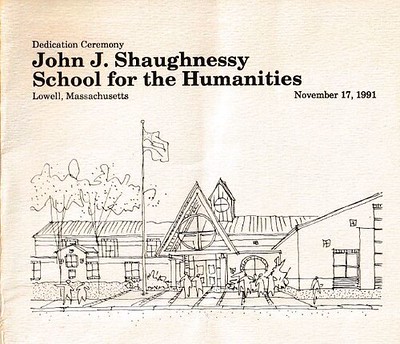 In 1991, as part of the new school building program at that time, the original Shaughnessy School was demolished and was replaced with a new school which still operates today. 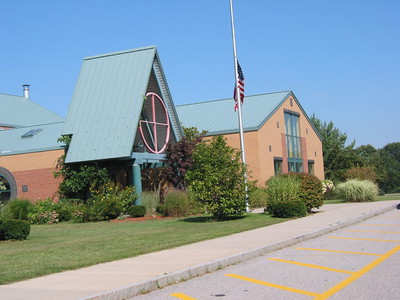 One year after Lt. Shaughnessy’s death (and before his body was returned to Lowell), his aunt, Sister Marcella of the Sisters of Mary in Binghampton, New York, wrote a poem in his memory:

Somewhere in France he lies sleeping
Under scarred Normandy’s moon
Our hero whose flower of manhood,
Was snipped off for Heaven last June!

There in the green of the hillside
They laid him beside his men
Nothing shall shatter his slumber;
No one shall hurt him again!

Winds sigh the chant of his Requiem
Moonlight illumines his cross
Soft, helpless rain, like our teardrops
Echoes the pain of our loss!

Yet, his is the truest triumph,
Death brings the perfect peace.
The living will always be militant
Till life and its struggles cease!