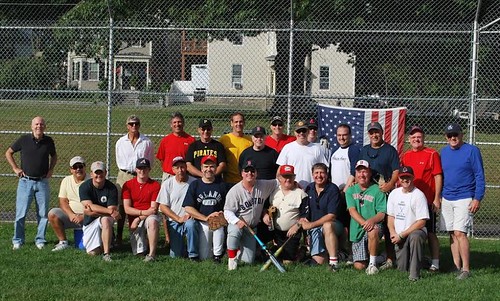 Lowell native and baseball nut Jack Neary is a playwright, director, and actor. His plays have been produced worldwide, and he has appeared in the films THE TOWN and BLACK MASS. His website is jacknearyonline.com.

I stood at home plate at Shedd Park, in my mid-sixties (I’ll never specify—NEVER!), knowing that this would be the final at-bat of my baseball life. I knew that because we had determined that this would be the last game we would play. My great friend, Tom Hickey, whom I had known since I was eleven, was on the mound tossing straight fast balls—or, straight as-fast-as-they-could-go-at-his-age balls—all afternoon. I was always the opposing pitcher, and as usual, my team was about to lose for what seemed to be the millionth time since we started this thing all those many years ago. Hickey almost always won. I almost always lost. That’s the way it was supposed to go. I didn’t mind. I was kind of proud of my 3-27 record. Especially since no loss was ever my fault. We never kept track of errors, but errors abounded in these games, especially on my team. I think my career ERA was something like 1.72. Didn’t matter. I always lost. Almost. And I was about to lose again.

Except this time, in the last of the last inning (sometimes we went nine, sometimes seven), my team had somehow managed to overcome a five-run final inning deficit, and there I was at the plate with the winning run on second. Two outs. Two strikes. We had decided that if we ended in a tie, it’d stay a tie. So, it was my final—ever—at bat. Hickey went into his windup. And fired.

We had started this annual diamond gathering approximately thirty years earlier. Nobody really knew exactly when it began. We were in our early thirties or late twenties back then, and we thought it might be a good idea to round up the usual suspects from our rapidly disappearing youth to play the game we all grew up with and loved, just to see if the baseball instincts hadn’t turned to stink. We scheduled the game for the first Sunday after Labor Day, to avoid conflicts with summer vacations or, in my case, summer theatre. We probably played the first game at Shedd, but over the years we moved around a little if somebody had already manned (or womanned) the Shedd diamond before we got there for our one o’clock game. I know we played at Hadley Field once or twice, Frank Ryan Field behind the Shaughnessy School off Gorham Street once, and also at Alumni Field off Rte. 38 a couple of times before the Lowell Spinners spun there. But Shedd was our home field.

It’s possible that the genesis of the idea to play this game was in the games Hickey and I and my brother Jim and others organized at O’Donnell Playground when we were teens. Back then, we somehow managed to entice upwards of thirty kids to convene at O’Donnell’s afta suppah, “buck up” to pick teams and play hard on that dry and dusty field until sundown, or at least until it was impossible to see the battered, brownish ball we had pretty much beaten into submission. (There were variations on the “bucking up” theme. We “One, Two, Three, Shooted” it. The two team captains chose “Odds” or “Evens,” then dug in and faced off, right hands shaking once, twice, and three times before the “Shoot” shot a number of fingers out toward the opponent. The fingers were added up. Odds or Evens. Best two out of three shoots won the first player pick. Then picks alternated until all the participants were chosen. I often campaigned to be a captain, I think mainly so I wouldn’t risk getting picked too low in the order.) Then we played the game.) It was a natural evolution to try it one more time in our young adult years.

But, as it turned out, it was fun that first year. It was a blast. So we said, what the hell, let’s do it again next year. Same time. Same field. And we did. And it was still fun. It was still a blast. Not only was it an absolute pleasure to run (well, sorta run), slide (well, very carefully), catch (on occasion) and hit (more frequently than you’d expect) again, but it was also a fantastic opportunity to catch up with old(ish) friends from school or the neighborhoods and shoot the … breeze … about days gone by, days current, and days to come. A bunch of us were from the late, great Sacred Heart Parish, another bunch from Lowell State College, some friends from “work,” whatever that work happened to be, some cousins and brothers-in-law who jumped at the chance to join us for this afternoon of nostalgic sweat and pulled hamstrings. And as the years flew by, we were joined by sons—and grandsons—who sometimes showed us up, but who more often than not marveled at these ancient basstids who refused to concede to the passage of time.

We did have one standout year. In 2011, my brother organized a 9/11 remembrance to accompany the game. For the first time, we purchased T-shirts (two colors, we still “bucked up” to pick the teams). We had a little crowd on hand to watch. We set up a microphone. Announced the players. Tom Hickey was the emcee, which he is very good at. I actually sang “The Star Spangled Banner” for the only time in my life. And boxer Micky Ward thew out the first pitch! That was some special day. And we kept playing for about five years beyond that.

But, after thirty-something years, it was getting harder and harder to round up the usual suspects, so we made the pronouncement that this would be the final year. And this was the final game. And this was my final at-bat. Two outs. Two strikes. Winning run on second.

I’m a right-handed batter. I had been trying over the years to hit line drives down the line to the opposite field, because I knew that if I somehow managed to place that liner over the head of the first baseman, that ball would roll and roll and by the time the trundle-y forty-five-year old right fielder (there was always a trundle-y forty-five-year old right fielder) got to it, I’d be standing at home with a four-bagger. I still could run, so I was confident I’d make it. This time, I didn’t need the homer, I just needed the hit. But I looked down that right field line again and I thought to myself, “Why not? Just one more shot at it . . . .”  Bad habits die hard. Trouble was, Hickey knew I was always trying to do this and he kept pitching me inside. You know a guy for fifty years, he won’t let you get away with stuff like this. So, I abandoned my plan and braced myself for that inside fast(ish) ball. And there it was. A little off the plate, belt high. I sat back on my right leg, thrust out with my left leg and let the bat fly. I connected. The ball took off on a line to left field and dropped in. The man on second scored. We won the game. And I knew that I could retire from baseball on that single. Sure, my record was 4-27 as a pitcher, but as a hitter, I went out a winner. Tom didn’t seem to mind. His record as a pitcher was 27-4. That’s HOF worthy. He’d be fine.

I told my brother this morning that I was writing this article. He said he’d been talking with some of the guys at the bi-weekly breakfast they have at The Corner Café on Lawrence Street. One of them suggested we try reviving the game. Nobody objected.

So maybe I’ll still get a crack at that liner over the first baseman’s head. I can dream, can’t I? 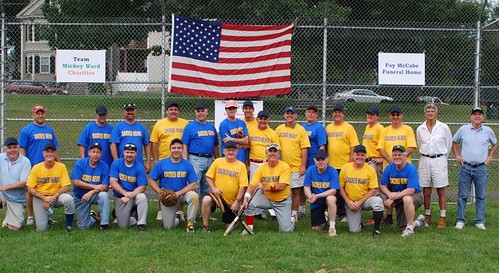