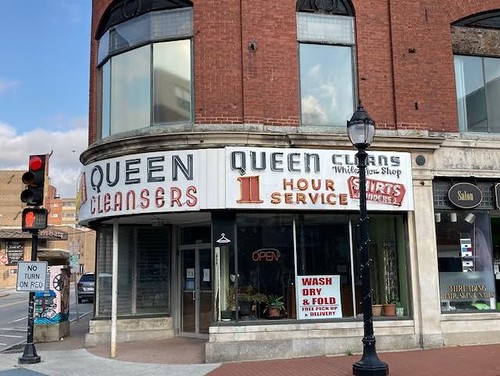 My old man never went past the tenth grade, but he once gave me a piece of advice that, for all my university education, I’ve been kicking over in my mind ever since. He owned a dry cleaner, the one that I own now, and back when I was a fresh-minted college graduate (B.A. English) I had the idea that he should find an image to raise the profile of his business, which lay on the tattered hem of the old industrial city where we lived.

“It’s a dry cleaner’s,” he crabbed, shoulders hunched. “What do I need an image?” He was an irritable man, especially with me. “If the clothes come back clean, people are happy. If they don’t, I’m outta business.”

“But you could attract a more affluent clientele,” I said.

“You might be surprised. You could draw them by using a catch phrase.”

“Like a verbal logo. Think about it. If I say Coca-Cola, what comes to mind?”

“Taking rust off a chrome bumper.”

“Exactly. You think of the one and, snap, the other comes. How about Greyhound?”

“So my idea is ‘Able Cleaners—out, out, damned spot.’”

He looked at me blankly.

He shook his head in wonder and walked away. I went after him. “What? It’s Lady Macbeth revealing her guilty soul. And there’re no copyright issues. It’d be a good business move.”

He walked back to his little office in the rear. “The last business move I made was the first—calling it ‘Able,’ stick it right in the beginning of the yellow pages. Only don’t nobody use yellow pages anymore, so what does it matter?”

“Pop, think about it. Shakespeare.”

He parked his hands on his hips. “Okay, Mister College Degree. One thing they obviously didn’t teach you but you’ve gotta learn—not just in this racket, but in life—you don’t succeed by making someone feel stupid. What are you, gonna offer a special on starching Elizabethan collars? Pressing cod pieces?”

The old man surprised me. “That’s funny,” I said.

“Let me give you a perfectly good example. Back in whenever, when Gore and Bush were running for president—”

“The election the Supreme Court stole.”

“Forget that. Listen. There was a debate, early on, and someone asked, ‘What’s your favorite book?’ A softball. Bush says . . . I dunno what he said, something simple. Gore, he says, The Red and the Black.”

“Stendhal. You know that one, Pop?”

“I didn’t quit school because I’m stupid. I had to go to work. My point is, I never heard of the damn book, and Bush never did for sure, and most voters probably didn’t either. I looked it up later. And it wasn’t even written by an American. I said to myself right then, the election is lost. The Supreme Court only cooked up a reason.

“But back to before,” he went on. “Average person that comes in here with their shirts and dresses has forgot any Shakespeare they read in tenth grade. They’re not gonna get it about ‘damn spots’ so I say to them, ‘It’s Shakespeare,’” mimicking me, “‘It’s Lady Macbeth.’ They’re gonna feel stupid, and they might decide to go to Star Cleaners, where the people working there don’t care crap about that stuff and aren’t worried about a clean soul the way they are about a clean blouse. No, forget the catch phrases and logos. Run an honest game, treat people square, and give ‘em what they want. You’ll do okay.”

The old man was right, God rest him. Now I run Able Cleaners, with two locations, one on this side of town and one on the other. We do a very good business; and when I want Shakespeare I go to the theater.

It’s an axiom of my trade that almost anything can be gotten out of fabrics—dirt, grease, wine. Even blood. I have a customer named Eddie Mercurio, a skinny stooped-over old guy who comes in regularly to drop off clothes, usually with two cups of coffee, and we kibbitz. On occasion he brings me a bottle of homemade wine potent enough to burn holes through a wool suit. I hear stories about Eddie, though never from him. When I see him, he’s a perfect gentleman; but people who know people reveal things. “Eddie M?” They say it kind of impressed. “You know Eddie?” And before I can explain that he’s been an Able Dry Cleaners customer since way back when my father, rest his soul, owned the business, they’re on to tales about Eddie. How he likes to hurt people.

“Between me and thee,” someone whispers, “he’s mob connected. You know that, right? He’s got lead in him. From when people’ve tried to ice him.”

“With good reason. He’s done some depraved shit, Eddie. One time settled a score by tying an unfortunate sonofabitch to a wharf piling. Did it at low tide and left him there. When the tide went out again, there’s crabs eatin’ the poor drowned bastard for lunch.”

My stomach rolled at that one.

“That’s the kinda guy Eddie M used to be. But you ain’t heard that from me.”

There are other Eddie Mercurio stories, too, some that sound made up, although maybe I want to convince myself. The truth is, beyond him playing cards in his social club across the river and bringing in his clothes, I don’t know what he does. There was one time, now that I think of it, when he dropped off a pair of white suspenders, and there were stains on them that I assumed were wine. Then, just today something happened that made me wonder.

He brought in some shirts and a few pairs of slacks, and as I made out the claim slip Eddie got talking in his rusty old voice about how he has always read horoscopes and consulted with palm readers. I didn’t tell him I regard that stuff as nonsense. He’s a good customer, and something I learned from my Pop is never argue personal belief systems with anyone—though I don’t think he said it just that way.

Eddie was telling me about how he used to get regular Tarot readings.

“No more. You know the Tarot?”

I say I don’t. And he tells it, his gnarled hands moving on the counter top, laying out imaginary cards. “So, in my deal I get the Moon. She tells me that’s good, hidden things’re gonna come my way. ‘Yeah? What kindsa things?’ I’m thinkin’ maybe I’m gonna meet a hottie, have a fling. Have my enemies drop dead. But next card’s the Tower. And, my hand to God, I feel like a goose walked on my grave.”

“The Tower? It’s fear. So, I’m lookin’ over my shoulder after that, start wearing a bulletproof vest . . . big clunky thing, means I gotta put on sweaters to hide it. But time goes by, two weeks, a month. Nothin’ happens. No bullets, and no babe. So, I lose the vest and get ridda the Tarot reader and find another. Well, lemme tell you, this one is cute—about thirty-five, blond. A young Kim Novak. She does my cards.” Again the gnarly old hands laying them out on the counter in pantomime. “And finally—the Ace of Cups. You know that one?”

“Accordin’ to her, I got a charmed life comin’. And goddamn if it ain’t true. Before long I’m sleepin’ with her and half fallin’ in love. I’m a young man again.” He thrusts out a fisted forearm, so I won’t miss the point. “I go back to dressin’ sharp—silk shirt, suspenders, the way I like.”

As he says this, I suddenly remember the white suspenders with the stains on them.

“Life’s easy street,” he goes on. “Few weeks later I’m sittin’ in the club and a coupla fucks walk in with sawed-offs. Bam bam bam!”

“I got lead pellets in here still.” He taps his thin chest. “Charmed life? Shit. So that’s it for the Tarot card reader.” He dusted his hands. “Succhiacazzi!” he spat.

He didn’t translate, and I didn’t ask. Another thing Pop taught me, never make a person feel stupid.

“But enough.” Eddie M. raises his hands, palms out. “I tell ya any more I’ll hafta kill ya,” and he half grins. “Next week I’ll bring ya some wine. I made a new batch.”