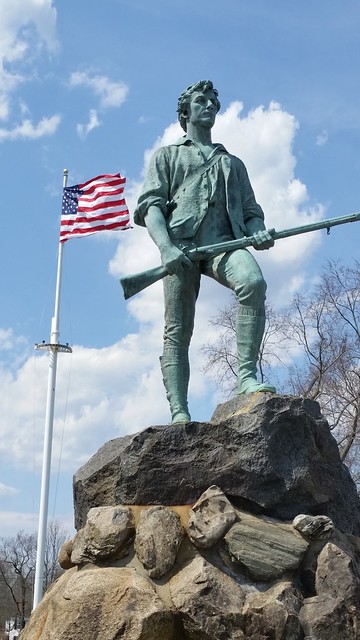 The Minuteman statue on Lexington Green

The Revolutionary War began on April 19, 1775, when a British Army expedition marched from Boston to Concord in search of contraband munitions. Confronted by a local militia company on Lexington Green on the way to Concord, firing erupted. Although no one knows who fired the first shot, eight of the militiamen were killed. The British continued to Concord but were unable to find the munitions. However, they were confronted by a large group of militiamen at the North Bridge over the Concord River. There, the colonists fought face-to-face with the British regulars until the British withdrew. In the meantime, several thousand militia from around the region, including many from the towns that became Greater Lowell, hustled towards the road from Concord back to Boston where they engaged in a running fight with the British column which suffered heavy casualties and was saved from surrender or devastation only by the timely arrival of reinforcements from Boston.

Since Lowell did not receive its town charter until 1826, it’s a bit misleading to title this post “Lowell in the American Revolution.” Still, people who lived on the land that became Lowell were involved in that war so this post introduces some of them. My favorite story from this time is found in Paul Revere’s Ride by David Hackett Fischer, a wonderful book about the opening hours of the American Revolution.

As evidence of the effectiveness of the colonial early warning system (symbolized by Paul Revere’s ride but more extensive than just him), Fischer tells the story of a rider arriving outside the home of Captain John Trull, commander of the Tewksbury militia company, before dawn on April 19 to notify Trull of the British advance. As soon as Trull got that news, he fired his musket out his bedroom window three times in a pre-arranged signal to alert Captain Joseph Varnum, commander of the militia company in Dracut across the Merrimack River that it was time to mobilize. Fischer’s point is that before the British had fully crossed the Charles River at the start of their mission, word of their expedition had already reached the New Hampshire border.

Here are some of the other area residents who played notable roles in the American Revolution:

Barzillai Lew – An African American who was born in Groton in 1743 and moved to Pawtucketville with his family while still a child. Eventually he owned a farm along what is now Totman Road and lived there until his death in 1822 at age 78. He is buried in Clay Pit Cemetery which is behind the Bolero bowling alley and arcade (formerly known as Brunswick Lanes) on Pawtucket Boulevard. In 1760, Barzillai joined the militia and fought in the French and Indian War. When the Revolution broke out in 1775, he again enlisted and served in units that were present at the Battle of Bunker Hill, the defense of Fort Ticonderoga, and the Battle of Saratoga.

Benjamin Pierce – Born in 1757, Benjamin Pierce had lived with his uncle, Stephen Pierce, since the death of his own parents. Stephen Pierce owned a farm located in today’s lower Highlands near the intersection of Parker, Powell, Chelmsford, and Plain Streets. On April 19, 1775, Benjamin was plowing a field when he heard gunfire from the southwest. He grabbed his musket and headed in that direction as part of a local militia company.  That afternoon they engaged the British on their march back to Boston from the North Bridge at Concord. Benjamin Pierce served in the militia during the war, seeing action at Bunker Hill and at Saratoga. After the war, Benjamin moved to Hillsborough, New Hampshire, where he entered politics. In 1827, he was elected Governor of New Hampshire and held that office for the next four years. His son, Franklin Pierce, was elected the 14th president of the United States in 1852.

John Ford – Born in Haverhill, New Hampshire, in 1740, John Ford moved to Chelmsford and served in the militia in the French and Indian War. In 1775, he commanded a local militia company which he led during the early battles of the American Revolution including Bunker Hill and Saratoga. After the war, he was a farmer and a businessman, constructing and operating a sawmill and a grist mill at Pawtucket Falls. He died in 1822.

Joseph Bradley Varnum – Born in 1751 in Dracut. At age 18 he joined the militia and rose through it ranks, serving as a captain in command of a company at the start of the war (as mentioned above in the Paul Revere’s Ride story). He served throughout the Revolution. After the war, he was continuously promoted until he reached the rank of Major General in command of all Massachusetts militia. He served in the U.S. House of Representatives from 1795 until 1811 with his last four years as Speaker of the House. He also served in the U.S. Senate from 1811 until 1817. He died in 1821 and is buried in the Varnum Cemetery.