About 20 years ago there was a movie called My Big Fat Greek Wedding which became an unexpected hit. My favorite part of the movie, besides its excellent soundtrack, was the bride’s father, Costas “Gus” Portokalos, played by Michael Constantine. Gus owned a restaurant, of course, and had a remarkable ability to trace everything in the world back to Greece as shown in the clip below.

Sometimes I feel like Gus except I relate everything back to Lowell. I’ve previously written about the city’s connections to Abraham Lincoln, Andrew Jackson, Frederick Douglass, Davy Crockett, Charles Dickens, Martin Luther King Jr., and many others.

But before now, I never knew there was a connection between Lowell and John Brown.

I do mean the John Brown who attempted to incite a slave uprising in 1859 at Harper’s Ferry, Virginia. Brown failed in that task, and he was tried for treason, found guilty, and hung on December 2, 1859.

In a letter dated October 30, 1874, from Samuel Lawrence to Charles Hovey of the Old Residents Historical Association (which later became the Lowell Historical Society), Lawrence recalled being the superintendent of the Middlesex Mills in Lowell during the 1840s. Most of the mills in the city produced cotton cloth but Middlesex, located on the Pawtucket Canal where the UMass Lowell Inn & Conference Center now stands, was a woolen mill. 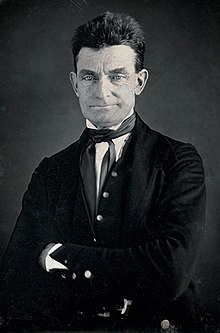 One day in 1843, John Brown, who was then living in Ohio, showed up at the Middlesex Mills with a sample of wool from some Ohio sheep farmers who he represented. Mr. Lawrence spent several hours with Brown discussing “sheep-husbandry and kindred subjects.” Lawrence described Brown as of “medium height – thin, gaunt and withy; his hair cut short all ‘round; face marked with will, compressed lips, looking like one of Oliver Cromwell’s best captains.” 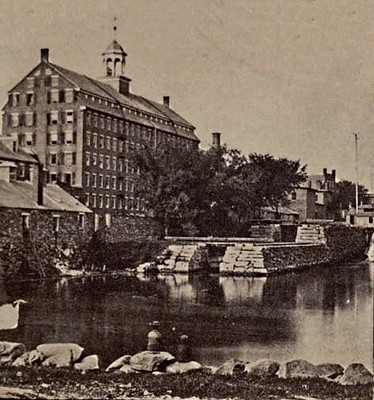 Middlesex Mills and Lower Locks with Concord River in foreground.

Lawrence purchased Brown’s wool and Brown returned a few weeks later with a much bigger load which was also purchased. Brown returned to Lowell for similar commerce for the next three years.

In 1846, still long before he was a nationally known abolitionist fighter, Brown moved from Ohio to Springfield, Massachusetts, where he became the fulltime sales agent for the wool growers of Ohio. Brown lived in Massachusetts for several years. His business eventually failed but he also made contacts with wealthy abolitionists who would go on to fund some of his anti-slavery activities, including the Harper’s Ferry action.

Everything always connects to Lowell.

If you subscribe to Showtime and care to watch a critically acclaimed TV series based on John Brown, check out the 2020 multi-episode The Good Lord Bird. Trailer below:

One Response to John Brown in Lowell