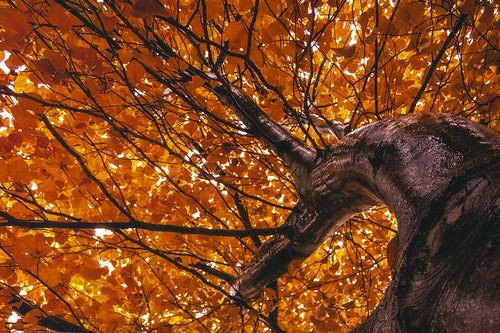 Ten years ago when we moved into our house, one of the things we liked most about the yard was the large sugar maple tree growing beside the driveway. I could tell the tree was old by the thick, rough bark covering its trunk. Countless snowstorms and decades of wind and rain had caused the tree’s limbs to become gnarled and twisted. During the fall and winter, when the tree was bare, it had a spooky appearance that reminded me of the 1993 animated film, The Halloween Tree, a fantastic children’s trick-or-treat story based on a novel by Ray Bradbury.

Although many of them still sprouted leaves, some of the sugar maple’s older branches had partially died and become hollow. These, along with a few large holes high up on the tree’s trunk, had been adopted as nest sites by generations of gray squirrels, blue jays, downy woodpeckers, nuthatches, and screech owls. A hole in the lower part of the trunk, marking the spot where a limb had once been, was home to a family of chipmunks.

During the warmer months, we enjoyed watching baby chipmunks—adorable little things—pop out of the hole and chase one another up and down the tree. They would sometimes do this for hours, which always made me anxious that a red tailed hawk—also among the tree’s residents—would swoop down and snatch one of them up.

In the heat of summer, the sugar maple’s wide canopy provided a shady resting spot for the cottontail rabbits living behind our garage. On hot afternoons, if we were lucky and very quiet, we’d sometimes spot a couple of rabbits relaxing on the grass beneath the tree. Seeing these normally skittish animals sprawled out on the ground, grooming themselves, always made me feel lucky.

The sugar maple’s bright red and yellow leaves were one of the best things about autumn at our house. They began to turn color in mid- to late September, usually before the other trees. In the early fall, the tree’s beautiful foliage was often the first thing I saw each morning when I rolled up the shades in our bedroom.

It was during a ferocious nor’easter in late March 2018 that one of the tree’s heavy limbs broke free and landed on my husband’s new Ford Focus. It happened late at night and over the howling wind sounded like a moving car slamming into a brick wall. In the morning, when the sky had cleared, we saw that the branch, which was about 14 feet long, had smashed the car’s rear window and had made enormous limb-shaped dents in the roof and trunk lid.

Although the car was drivable, our insurance company totaled it. It wasn’t all bad, though. We got enough money to pay off the loan. And since we both worked from home, we decided to see how we would fare with one car instead of two. It worked out so well and saved us so much money that we own only one car still.

We cut up the fallen limb for firewood and clipped off several of its thinner branches, all of them swelling with spring buds. We arranged the branches in a large vase filled with water and enjoyed a bouquet of fresh spring leaves as the centerpiece of our Easter table.

After that storm, we began to worry every time the wind picked up. There was no telling if, or when, another limb would fall from the tree. We began parking on the opposite side of the driveway, as far away from the maple as possible. If people came to visit, we’d encourage them to park beside the garage, out of the way of the old tree.

But with more storms came more downed limbs. More than once we arrived home to find a large branch in our driveway, always grateful that we had been out when it came down.

One night last fall, one of the tree’s largest boughs broke off and landed on the roof of our neighbor’s garage. Fortunately, it didn’t cause much damage. But the message was clear: The tree needed to come down.

I had to leave the house when the tree service began removing the maple’s knotty branches. I couldn’t bear the sound of the chainsaws.

Hours later, our driveway covered in sawdust, a vast hole had opened in the sky. A single gray squirrel paced back and forth along the eaves of our neighbor’s garage, searching in vain for its lost home.

In the next few weeks, we’re going to plant a new tree in the spot where the sugar maple stood. We’ve considered different kinds of trees—some tall, some squat, a few with delicate spring flowers. We still haven’t decided which one will work best, but I’m beginning to think a young sugar maple might be just right.