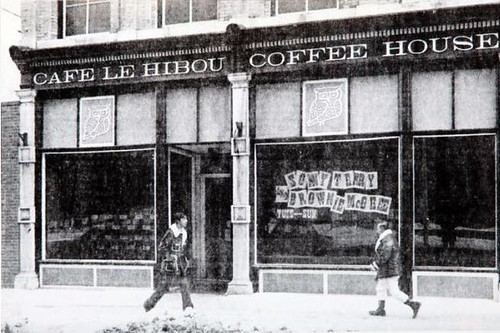 It’s a hot summer day in 1966 and we’re on the road again.  Bryan is driving his Dad’s Chrysler, The Rolling Stones’ ‘Let’s Spend the Night Together’ is blasting from the radio.  We are young, happy and excited, laughing at silly jokes, talking about girls. Free.

We’re on our way from Ogdensburg, NY to Ottawa.  Ogdensburg was and is a small, tough working class town.  It is OK, situated right on the St. Lawrence River, and there is not a more beautiful river in the world, so the place has its charm.  But there wasn’t much to do, especially for teenagers, except drink, and we did plenty of that.

But there, just across the River was Canada, and an hour’s drive away was Ottawa.  Ottawa, a real city, and not just any city, but the capital of Canada.  Cross the bridge, get on 416 and it’s a straight shot to the city. And every Saturday we could, we were there.

Bryan had a cousin there who was in grade 13 (I never have figured that one out, 13?), so on our early visits we had a guide.  But after a while, we didn’t need him.  Ottawa’s not a huge city, maybe  800,000 people at most, so it’s easy to get around.  We’d walk along the Rideau Canal, visit Parliament Hill, the National Gallery, and just walk around looking at the beauty of the city.  What amazed us most was the people, all sorts of people we’d never see in Ogdensburg—black people, brown people, women in saris or wearing hijabs, men wearing outfits we had no idea what they were.  And a Tower of Babel of languages; French and English of course, but also so many other we didn’t recognize…Arabic, Chinese, Swahili?  This was, after all, the capital city, and we soaked it all up.

But there were three places we’d always go to.  First, the record stores, all of then filled with LPs, EPs, singles you just could not find or buy in the States.  First and foremost, the British Beatles albums, but obscure and semi-obscure bands and artists from the Small Faces and Them, to the Move, to the Bonzo Dog Band.

Second were the clothing stores, sort of a mini Carnaby Street.  If the British bands were wearing them, you could buy them.  My favorite was a great pair of paisley bellbottoms.  On our first visit, I bought an actual Beatles jacket, the one with the collarless round top.  My only mistake was wearing this to school back home, for which I received at least three punches in the mouth (difference was not well accepted at the time in my home town).

But the place we loved, really loved was Le Hibou.  Le Hibou was a folk club, a coffee house.  It was dark and dingy, with just the right amount of cigarette smoke and alienation in the air.  Everybody was hip and just so impossibly cool, and we just loved it.  And the best music imaginable.   We became regulars.  This is how we became regulars, and this takes us back to Ogdensburg.

Bryan was a talented person.  He ended up going to college on a football scholarship, but also played a pretty good banjo, and was a gifted painter.  One summer he’d finished an oil painting, a landscape featuring the river.   As we were walking out of the park we were in, he dropped the painting face down, paint still wet, in a pile of pine needles.  Disaster?  But no, as these things go, what emerged from what had been a pretty typical landscape was a masterpiece.  The landscape was still there but it had become a dark and brooding piece, hope and doom together on a now textured work of true art.

Not knowing what else to do with it, we took it to Le Hibou on one of our visits.  The owner or manager or whatever she was, said she loved it and immediately hung it on the wall.  There it stayed until the place closed in 1979.

We saw everybody there: Bruce Cockburn, Sonny Terry and Brownie McGhee, Tom Rush, Tim Hardin, Joni Mitchell, the Howlin’ Wolf, on and on.  When we saw the Howlin’ Wolf our table was only about six feet away from the small stage.  It was too much; the power, the energy, his ability and dedication to put every ounce of himself into his art was overwhelming, like standing in front of a hurricane.  We moved back a couple tables so I could breathe.

One night, the Jim Kweskin Jug Band was playing.  And in the band, singing right in front of us, up there on the stage, just a few feet from our table, was the most beautiful woman I had ever seen in my life: Maria Muldaur (now Maria D’Amato) .  She had maple syrup colored skin, very long black hair that sepentined around her face that was all huge dark eyes and full lips.  I was in love, and knew this was the woman I was meant to be with.

She was singing something—beautifully—and banging away on the tambourine when all of a sudden a ring, or whatever they’re called, flew off her tambourine and landed right on our table , almost right into my espresso.  This was a sign!  Yes, we were meant to be…one.

The band took a break, and there she was, standing talking to somebody at the coffee bar.  This was the moment, I just knew it.  I picked up the ring and went over to her.

Maria turned around and looked at me.

“I believe this came off your tambourine.”

“Keep it,” she said, and turned back to talk to whoever it was she was talking to.  But, she had looked at me, actually and for real talked to me.  I kept the ring for a long time, but, as people do, it got lost along the way.