Inspired by the anniversary of the first US television appearance of The Beatles on the Ed Sullivan Show on February 9, 1964, and by the success of the Get Back documentary now on Disney Plus, we bring you our own Beatles Week, a series of blog posts about and related to The Beatles. 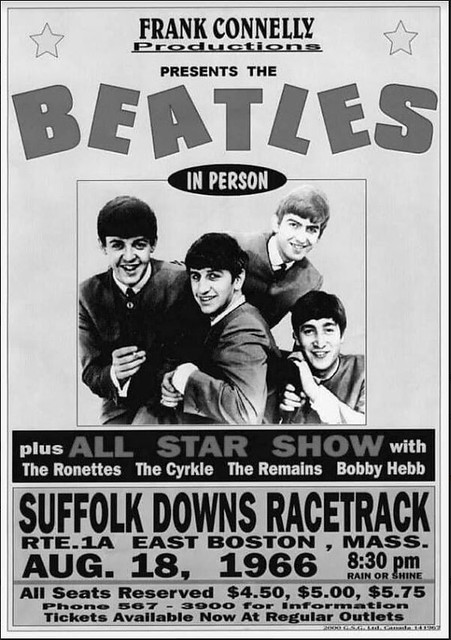 On February 9, 1964, The Beatles appeared on the Ed Sullivan Show. Their performance that night is a part of the cultural and musical history of this country.

Two years after the Sullivan performance, The Beatles came to Massachusetts for a second time. It was 1966, and I was fifteen years old . . . and I loved The Beatles (as I still do). At the time I was living in a housing project above Glendale Park in Everett. Three of my closest friends (Kevin, Nicky, Bobby) and I were able to get tickets to the August 18, 1966, Beatles’ concert at Suffolk Downs.

I don’t remember much about that night, but the memories I do have are vivid. My friend Kevin’s father drove us to the racetrack in Revere/Boston. As you can imagine, when we arrived, the Suffolk Downs parking lot was in total chaos. The sound of young kids, like us, buzzing everywhere, car doors slamming and inaudible chattering . . . it was the sound of excitement.

As we entered the track we pushed and shoved and got pushed and shoved until finally the four of us managed to make it to the second floor of the grandstands. Of course, there were no empty seats, but we didn’t care. We were too excited to sit still anyway. Luckily, we claimed some floor space which would give us a “fair view” to watch the concert. But my friend Bobby’s view was obstructed by an older, tall kid who looked too tough for us to tangle with, so Bobby climbed up one of the steel support beams and sat above the crowd.

As we anxiously waited for the concert to begin, kids just kept pouring into the park and grandstand. The stream of bodies seemed endless, pushing, and shoving . . . but as dedicated Beatles’ fans we clung to our floor space, and refused to surrender our position regardless of how strong the shoves and pushes.

I remember it was a warm, clear, summer night. Powerful floodlights focused on the stage partially erased the dark. The scene was electric.  Several “warm up” bands performed singing nondescript songs, to a crowd that had no interest, like modern day Salieri’s playing for a crowd waiting for the brilliant Mozart. As one of the bands sang “some song” a helicopter flew over the crowd and landed on the track’s infield . . . a loud scream came from the crowd. “That must be them. It must be The Beatles” . . . but it wasn’t.

Finally, as the Cyrkle played their hit, “Red Rubber Ball,” a convoy of limousines came flying down the dirt racetrack, turned sharply at the finish line, and parked behind the stage.

From our viewing spaces, we could see activity around the limos. There was no doubt this time. It was them . . . it was The Beatles. Within minutes they climbed on stage and began playing. The place went wild. People scrambled from everywhere and raced toward the fence that separated the track from the crowd, Kevin, Nicky, Bobby and I included. Police Officers lined up shoulder to shoulder in front of the stage creating a human barrier to protect the Beatles as they played. Of course, this didn’t stop crazed fans from climbing the chain link fence and dashing to the band . . . . Pandemonium reigned, screaming, crying, jumping, hugging.

I remember nothing of the music. I just remember the sound of one continuous, ear-deafening scream, but I didn’t care.  Suffolk Downs on August 18, 1966 is a pleasant blur in my brain. One of those events in your life in which the specifics fade, but the emotions remain keen.

During the mad chaos that ensued when The Beatles took the stage, Kevin, Nicky, Bobby and I got separated. Kevin’s father was scheduled to pick us up after the concert, but the parking lot was jam packed with “fathers picking up kids.” I couldn’t find our ride or my friends. With no other option, I headed for the parking lot exit and began to walk home. After a couple hundred yards, I saw Kevin on the other side of the road. I yelled to him. Together he and I walked the four miles from Suffolk Downs to our homes in the Everett Projects. The next day we discovered that Nicky and Bobby luckily had found each other too and walked home together.

For days all we talked about was The Beatles, the concert, and the walk home. Funny thing . . . as I finish writing this post fifty-five years after seeing The Beatles in concert, I marvel at the fact that I am still talking about it.