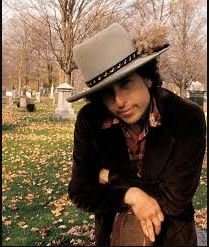 I’ve been hanging out with Bob Dylan quite a bit over the last few years. We’re pals. He’s always delighted to see me because he enjoys my company immensely. Generally, he comes by at about 3:00 am, though it’s hard to say because I don’t have a clock near the bed. And generally, I’m asleep. In the interests of accuracy, I’ll amend that. I’m always asleep. Last night, or this morning, I found myself at a crowded party eating a donut. The donut was tasty, especially since in waking hours I have not eaten a donut in thirty years. I had only taken two bites when the familiar freewheellin’ figure came surging through the crowd toward me. “Hey, Bob,” I said, and handed him the rest of the donut, which he stuffed into his mouth gratefully. He gave me ‘great to see ya,’ ‘thanks for the half-eaten donut’ kind of slap on the back and a quick one-armed hug and we began to catch up.

Now in my dreams, as, most likely in your dreams, anything can happen, and I’m never terribly surprised. My parents are alive again. I may have a conversation with my dog or play the piano or fly a plane. All of it seems quite normal. But even in a dream, I’m more than a little amazed that I’m chillin’ with Dylan.

A few weeks ago, I was walking around Portsmouth with Bob. I went into a little bakery for coffees and croissants. He waited outside so the crowd inside wouldn’t bug him for autographs. He pulled a baseball cap low over his eyes and took a seat on a park bench. Bob wanted to give me money, and I know he has it, but hey, a coffee and a croissant is the least a person can do for Bob Dylan. I brought the goods out and joined him on the bench and we sat and sipped and chewed and chatted until it was time for his boot heels to be wanderin.’

The substance of my conversations with Bob Dylan, being “such stuff as dreams are made on,” evaporates quickly; I only remember our easy camaraderie. If, like, Jack Kerouac, I kept a book of dreams, I might put together a list of Dylan’s appearances and more of the details and try to make sense out of them. But why Bob Dylan? I wonder if a psychoanalyst would have an opinion. Does he visit to help me settle some unresolved issue? Why not Paul McCartney? Why not Mick Jagger? Jimi Hendrix? Joni Mitchell? Of course, I grew up with Dylan and am a fan, but I’m not a true votary. I don’t listen to Dylan cd’s in my car or collect memorabilia. My wife and I saw him once at the Tsongas Arena and were disappointed. As the woman in front of us said, “It sounds like he has laryngitis.” Maybe the next time I see him, I’ll tell him to quit smoking.

Of course, Mick Jagger and the others never won a Nobel Prize for Literature. Joni Mitchell would certainly be worthy of consideration. But Dylan, I suspect, represents to me the Protean artist. How many times has he reinvented himself, beginning with his own name? This makes him not only the obvious genius he is, but a mystery, and the human brain, even when it’s sleeping, wants to solve mysteries. Who is he, really? When we saw him in Lowell, he never addressed the audience directly. There was no, “It’s great to be back here in Lowell, Massachusetts,” or “How are you all doing tonight?” He said nothing. He performed his songs.

I don’t spend a lot of my waking hours thinking about Bob Dylan, and yet he seems to loom large in my subconscious. He represents something, but the conscious brain can only guess what it is. Joyce’s Stephen Dedalus, in a A Portrait of the Artist as a Young Man, says that through his writing, he intends to “forge in the smithy of my soul the uncreated conscience of my race.” Dylan, at different times, has been considered the conscience of our generation, and perhaps that idealization lingers somewhere in my brain or my heart.

It’s a mystery, and unless writing this brief piece exorcises the dream Dylan somehow, which would be a shame, I hope to continue the friendship, which at best will remain shadowy, for as the troubadour himself once sang:

When the rooster crows at the break of dawn,
Look out your window, and I’ll be gone.

7 Responses to Chillin’ with Dylan by Steve O’Connor