Trasna is pleased to announce that poet Daniel Murphy will join its team of editors.

This week we feature four of his poems. Whether it’s a “rusty gate in a field of rock,” or “the cream cheese on your cheek,” Murphy explores the expansive to the intimate. There is a rhythm in his writing between the big and the small; between man and god — “between where you left your keys and astrophysics.” His poems are visual, and his voice is distinct — “a word to salt the driveway with.”

Included in this selection are two new and powerful poems: “Eviction Scene,” about the displacement of the widow McNamara’s  family, and their resulting emigration; and “Man,” which takes place on a rain-soaked street in the States. Together, they are reflective of Trasna’s larger theme of exploring the connections between two countries separated by an ocean. 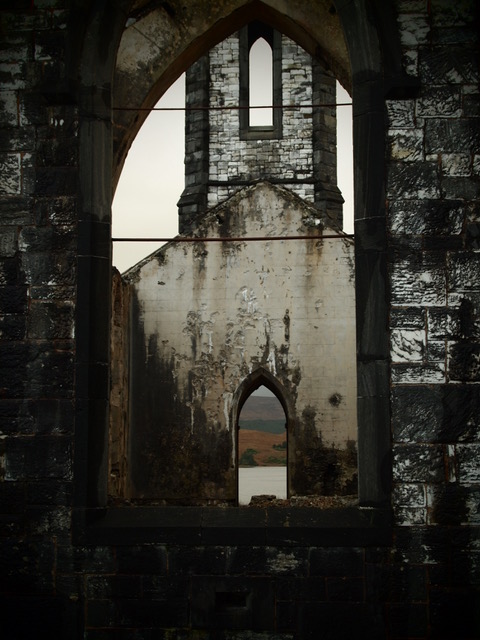 A moment arrives in oversleeping
when the body seems all the more tired,
when sleep itself ceases to refresh.

All that rest becomes heavy, pins
the head and limbs.

beyond which
it’s just as painful to eat
as it is to starve.

of things we don’t know,

in the slug darkness

between where you left

your keys and astrophysics.

No fingers to point

to truth or stars

or cream cheese on your cheek.

to salt the driveway with.

Or something to call

the love you once felt, still feel.

under the same sunbaked roof.

The dog’s dream kicking you.

Or the snowing static of a knob TV

as it makes an old woman glow.

A squat wall borders the fore.

A patch of packed dirt and stone

leads to the parged-coat cottage

caubeens and beards rolling over

their overcoats. Lined up among them

towers in boots; all of them set their backs

against the rough wall of the house, staring

back at the aperture capturing them as if

the past is about to be taken.

They stand ready for the party outside

our view. In the doorway and windows

trunks of sawn oak and ash are stacked

to barricade the home—eyes of heartwood

hard, unblinking—save for one square frame

where the Widow McNamara fastens

on a sill beneath an eave of thatch.

surveying the lot. A large basket of peat

brims by the priest. Who am I to say

it burns with the house? That its smoke

fogs the eyes of her sons and daughters,

that its scent settles in their clothes

as they emigrate in boats toward a new century?

I cannot see a sparrowhawk circle

uncertain above a gutted ruin. Or where

she tires and rests on a fresh-cut stump.

But when I study this black & white

I smell the McNamaras just after, little ancestors

blooming on their tongues to some harbor.

A cloud bursts over Broadway Street.

Through a car window, everything’s blurred—

fog to a collection of impressions—save a man

a Boston Herald held above his head, news

bleeding down his face, all those story lines

that more or less the world signed off on

surfacing blackly in the path of his shoes. 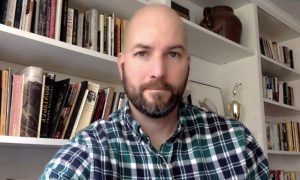 A former carpenter and Golden Gloves boxer, Dan Murphy teaches writing and literature at Boston University. He recently served as Writer-in-Residence at Phillips Academy in Andover, Mass. A past Robert Pinsky Global Fellow at Boston University and a Grace Abernathy Scholar of Creative Writing at Emory University, his work has appeared in Sugar House Review, The Summerset Review, The Adirondack Review, and Panhandler Magazine, among others. His chapbook, The Narrow House, was a 2016 finalist in the Munster Literature Centre’s international chapbook competition. A full-length collection, Estate Sale, is currently under review.