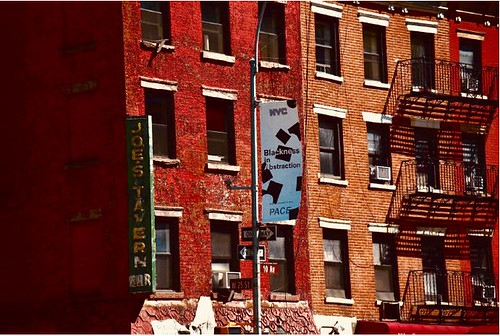 Crawdaddy Remembers A 1953 Christmas
Encounter With the Drifters

My dad yanked me in hard out of the cold. It was mid-December 1953, and the black Gotham City skies were spitting down snow flurries. We were waiting to rendezvous with my mom who left us for a couple hours to browse some obscure Chelsea clothiers. My father had about enough frozen walking along Tenth Avenue, so we darted into Joe’s Tavern Bar at 25th Street. The thought of some invigorating scotch spurred him to jerk his eight year old son quickly into the welcome warmth of the tavern.

We moved straight to a vacant back table. It was early evening, and Joe’s was over half full of commuters dropping in for a toddy on the way home from work. Most were local ethnic whites from the construction trades, judging by their patois and garb. However, sitting at the next table were four dapperly dressed black men who were loudly arguing with an older white dude in a rumpled business suit. I was very young, but I could tell they were conflicted about some business matters and money.

My dad ordered himself a scotch, and he set me up with a Coke and potato chips. The brouhaha at the next table was escalating. There was a strong tirade of profanity in the air. My father cursed like a longshoreman when he was working, but something about this deluge of obscenity in front of his young son seemed to get under his skin. He took a long drag off of his Chesterfield, and threw back a gulp of scotch.

“Hey!”, he yelled through the din. “I’ve got a little boy over here!”  Well, one tall, black man with a mustache looked over and adopted a contrite tone. “Sorry about the fuss. We just recorded a song, and we are trying shake an advance out of this cheap- skate,” he intoned. “Hey, do want to hear a verse or two?” he shouted, trying to mollify my old man.

The dumpy, white guy tried to talk them out of it. But the young black men quickly stood up, faced the crowded front of the joint, and started singing a familiar Christmas tune a cappella.

I had already heard Irving Berlin’s, “White Christmas” quite a few times in my young life on the radio and on our home Victrola. But a small man with a high tenor voice suddenly stopped the bar cold   with a soaring rendition that left Bing Crosby in the dust. Intermittently, the taller guy cut in with bass lyrics which simply mesmerized the well-oiled patrons. The other two singers just contented themselves with some welcome background harmony.

My dad was placated, and we soon left to meet up with my mom, but not before the bar patrons gave the quartet a rousing ovation. We told her about our little adventure, but she seemed more interested in a new blouse that she had scared up during her shopping.

Some years passed and I was then a teenager obsessed with radio rock ‘n roll. I locked in tight on WEAM, a faint 5,000 watt, AM station which provided sketchy coverage for my Washington, DC home. My guru was their afternoon DJ, Jay Perry. He not only played the seminal R & B music of the era, but he also had the skinny on all the groups and solo stars. Me and my neighborhood  pal, Ralph, hung on his every platter and funky word.

It was again December, and I swung by Ralph’s on the way home from school. He cranked up Jay Perry on the ponderous Zenith console in his living room. Then I heard him say, “the Drifters”, and that same fantastic tenor voice from the NYC bar floated out of the big speaker to fill the living room. Then, Big Mama Mae’s porcelain artifacts which were scattered on every available surface began to vibrate to a pounding base vocal. When White Christmas ended, Jay’s informative voice told us that we just heard “Clyde McPhatter on tenor with the Drifters, Bill Pinckney on bass.” By now, Clyde was out on his own, having hit it big with  his single, “A Lover’s Question”. Ralph was somewhat skeptical when I began to relate my impromptu brush with the Drifters back from 1953. As the years passed, he began to accept my father’s highly embellished account which intimated that the Drifters were his close, personal friends.

The Drifters still sing on the oldies circuit today. They have undergone over 30 iterations, personnel wise. Clyde McPhatter even did a second stint years later, and Bill Pinckney wowed fans with his virtuoso bass up until his death years later. White Christmas is  still revived annually, and it even achieved cinematic immortality in the soundtrack of “Home Alone”.

Now, I also still enjoy this classic version of White Christmas every single holiday season. But for me, the Drifters will always  just be those four cool black guys who went a cappella to knock  the crowd dead in Joe’s Bar on a cold, snowy night in Gotham City.

The Drifters are members of three separate Halls Of Fame—Rock ‘n Roll, Do-Wop, and American Singing Groups. In beach music country where Crawdaddy has long resided, their smash hit, “Under the Boardwalk” is iconic. The song was recorded in 1964 the day after lead singer, Rudy Lewis, died of a heroin overdose. The studio was expensively booked, so the recording session went on  as scheduled the next morning with their backup singer, Johnny Moore, in the lead. The tune hit number one three different times on the R & B chart. Moore remained as the Drifters lead singer until 1998.

William C. Crawford is a social worker, writer, and photographer who lives in Winston Salem, North Carolina. He was a photojournalist in Vietnam and has since written a number of books of photography and on other topics, all available here.

3 Responses to A Christmas Encounter with the Drifters