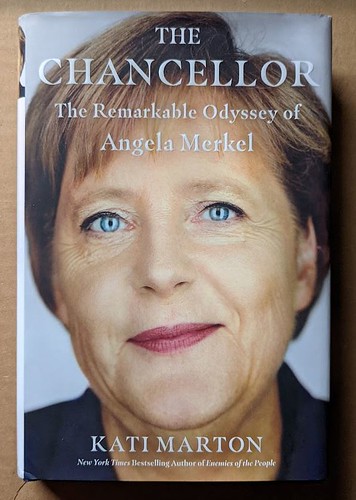 Today we venture into the field of International Relations, a rare topic for this site. The prompt for writing is the departure of Angela Merkel from the office of Chancellor of Germany, a position she held for the past 16 years. As I’ve written previously, I have an interest in and fondness for Germany, plus I recently read an excellent biography (The Chancellor: The Remarkable Odyssey of Angela Merkel, by Kati Marton. Simon & Schuster, 2021) which made me even more appreciative of Merkel and her accomplishments.

Although it’s commonly known that Merkel was from East Germany, she was actually born in West Germany – Hamburg, to be exact – in 1954. But her father, Horst Kasner, was a Lutheran minister who agreed to relocate from West Germany to a small town deep within East Germany and establish a parish there. This was a particularly onerous assignment because like all Communist regimes, the East Germany government did not recognize organized religion, so Rev. Kasner and his family were regarded by the authorities with even more suspicion than was cast on ordinary citizens.

Angela was a very good student and at a young age she learned to avoid behavior that drew the attention of the authorities. She joined Communist youth groups since membership was a precondition to furthering one’s education but got only mediocre grades in the mandatory courses in Marxist-Leninism. She excelled in science which was a “safe” area of study and took an advanced degree in physics from Karl Marx University in Leipzig in 1978. Angela then moved to East Berlin to work at the Academy of Sciences. While there, she received her doctorate in quantum chemistry.

While at Leipzig, Angela Kasner married fellow student Ulrich Merkel and became Angela Merkel. The couple divorced in 1982, however, Angela kept Merkel as her last name. Shortly after that she began a relationship with science professor Joachim Sauer who she married in 1998. (Sauer rarely attends political events and the couple strenuously guards their privacy, a choice largely respected by the German media).

The fall of the Berlin Wall in 1989 was transformative for Angela Merkel. It suddenly became safe to speak out on public issues and to get involved in politics. She began as a volunteer stuffing envelopes at the fledgling East German “Democratic Beginning” party and because of her intelligence, willingness to work hard, and her ability to answer questions factually and unemotionally, she was soon made the party’s press spokesperson.

After that, things happened very quickly. The Democratic Beginning Party merged with the East German branch of the Christian Democratic Union (CDU) which was one of the major parties in West Germany. With the reunification of East and West Germany, Merkel ran for and won a seat in Parliament as a member of a united CDU.

The CDU, led by Chancellor Helmut Kohl, had run West Germany since 1982 and the party’s hold on power continued after reunification. Anxious to have someone from the former East Germany in his new cabinet, Kohl selected one male politician after another but it seemed that all of them had, at one time or another, served as informants for the Stasi, the East German secret police. (Because of the speed of the collapse of the East German state, the Stasi was unable to destroy its voluminous and detailed files which proved terminal to the aspirations of many East German politicians).

Eventually, Kohl reached Merkel who he named Minister for Women and Youth which, in terms of cabinet gravitas, was relatively low but she worked hard and earned the respect of many. A few years later Kohl named her Minister for the Environment and Nuclear Safety, a much more high profile position. Given her science credentials and her growing political experience, Merkel excelled in that role.

When the Kohl government was defeated in 1998, Merkel was named the CDU’s General Secretary, a high-ranking but not top position in the party. Shortly thereafter, news broke of a campaign finance scandal that engulfed the CDU. Even former Chancellor Kohl was implicated. While the rest of the CDU leadership defended Kohl, Merkel wrote an OpEd chastising him and saying it was time for new leadership. That she would turn on her former mentor in a way that was to her own political benefit was not lost on close observers of German politics. It was a side of her not seen before but one that she used to her advantage throughout her career.

In 2002, Merkel sought the CDU’s nomination for chancellor but lost to Edmund Stoiber who then lost the election to the Social Democratic Party’s Gerhard Schroeder. (Keep in mind that the German parliamentary electoral system is much more complicated than my use of “nomination” and “lost the election” suggests but for simplicity’s sake I’m Americanizing these political concepts).

In the aftermath of the CDU’s loss, Merkel became the head of the party and the leader of the opposition in parliament. She was also the CDU’s nominee for chancellor in the 2005 national elections in which the CDU defeated the Social Democrats by an extremely thin margin. Still, it was enough of a win to make Angela Merkel the new German chancellor in a coalition government. She held power through three more national elections and served as chancellor for 16 years.

There were a couple of things from the Kati Marton biography that helped me understand Angela Merkel.

Like all other high school students in East Germany, the second language Angela studied was Russian, not English. She excelled, winning a national competition in Russian which earned her an all-expenses paid trip to Moscow as a teenager. This fluency in Russian helped in her professional life as an East German scientist but also in her dealings with Vladimir Putin. Although Putin, as a KGB agent assigned to East Germany, was more fluent in German than Merkel was in Russian, their shared languages gave them a better understanding of each other. Similarly, as someone who grew up in authoritarian East Germany, Merkel knew viscerally what Putin was up to in recent years. And Putin knew that she knew it which made him less certain in his approach to her.

As the daughter of a clergyman, Merkel was and is quite religious but not in the formal go to church every Sunday way. Instead, she was more like Abraham Lincoln or Ralph Waldo Emerson, believing there is a God or some higher being but not being overly impressed with organized religion. When it came to dealing with the environment, with refugees, or with a host of other issues, Merkel’s religiosity influenced her considerably.

Another aspect of the East German education system shaped Merkel. The curriculum in the East presented a twisted-version of Nazism which claimed that the communists of the east were victims of Nazi persecution just like the Jews and therefor bore no responsibility for the Holocaust. Because the post-World War II communist government had such tight control on school curriculum, this anti-factual interpretation was taught uncritically in the East German schools.

After the collapse of the Wall and through her early career in politics, Merkel learned of the evil perpetrated by the German people – particularly those in the east where many of the most prolific extermination camps were located – on the Jews of Europe. She came to believe that Germany owed an eternal debt to Jews everywhere but especially to Israel and she put great effort into strengthening Germany’s relationship with that country.

Merkel’s acceptance of national responsibility for the Holocaust also shaped her response to the plight of refugees from the Middle East in recent years. Germany has taken in more refugees than any other country in Europe. This has caused substantial political friction within Germany and has cost Merkel’s party electorally. But because she felt the country had a moral duty to the refugees due to Germany’s ill-treatment of others in the 1930s and 1940s, she disregarded the political consequences and let the refugees in.

While Merkel was criticized by her opponents for her policy on refugees, she was also criticized by some supporters for not being vocal enough in defending or at least explaining her refugee policy. But her reticence on flamboyant speeches by politicians is also grounded in Germany’s history. A politician who used fiery rhetoric and emotional symbols to mobilize the German people led to perhaps the greatest evil of the 20th century, so Merkel and many other Germans are wary of using speeches and symbols to manipulate public opinion.

What Merkel relied on instead was facts, preparation, logic, and hard work. She has repeatedly prevailed in difficult negotiations by outlasting opponents with her knowledge, principles, patience, and stamina. In a time of great uncertainty in the world and especially in the United States, her steady leadership in world affairs will be missed.

2 Responses to Angela Merkel: An Appreciation