The first Lowell High School game I attended was when I was a young boy living in New York City with my parents.

In November 1958, my relative George Tsanezakos and his friends came down from Lowell to stay in our home. They were all students at Lowell High School, and they had traveled 250 miles with one goal in mind: to attend a LHS football game in Union City, New Jersey, against St. Michael’s High School. For the life of my, I couldn’t understand why anyone would come that far to see a football game when you could see the New York Giants in black and white on TV every Sunday! When asked if I wanted to go, I quickly said, “Yes!” This was to be my first organized football game ever.

That Sunday we crossed the Hudson River to Union City. It was a small city on the banks of the Hudson. We entered Roosevelt Stadium to see the first real live football game in my life. There must have been over 3,000 people at the game. To my surprise, many of them were from Lowell, or sitting on the Lowell side! What I do remember is that St. Michael’s scored first, their only touchdown. But Lowell went on to win, 26-7. I knew there was a halfback named O’Meara who played on a team calling themselves the Red Raiders. It was odd that the Raiders wore maroon jerseys and not red! This would be my first LHS football adventure, but not my last. 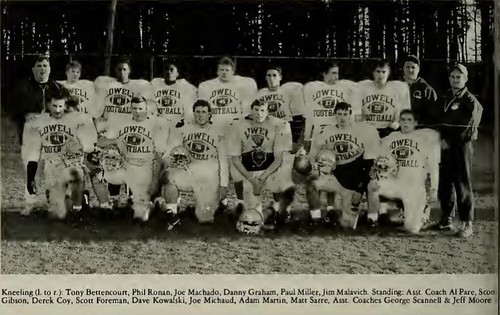