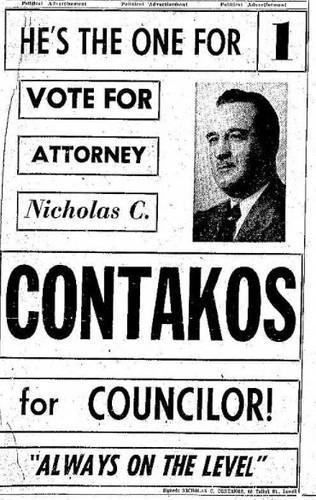 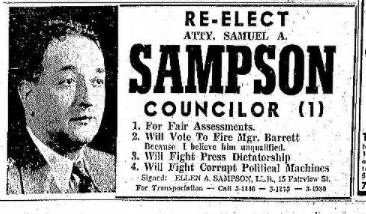 While the city of Lowell has been the scene of many close elections, perhaps the most notable one is the 1953 city council race that was ultimately decided by the Massachusetts Supreme Judicial Court five months after the election. The combatants in this contest were incumbent councilor Nicholas Contakos and newcomer Samuel Sampson, two Greek Americans who were both well-known local attorneys.

A major factor in the case was the city’s proportional representation method of electing councilors. Under the proportional representation method (similar to what is today called “ranked choice voting”), voters would number their preferred candidates 1 through 9. When counting the votes, each ballot was allocated to the candidate marked number 1 by the voter. Election officials would establish a “quota” number which was calculated by dividing the total number of ballots cast by the number of seats to be filled in the election and then adding the number 1 to the result.

As soon as a candidate reached that quota in number 1 votes cast for him or her, that candidate was deemed elected and no further ballots were attributed to that candidate. The additional ballots on which that candidate had been marked number 1 were deemed excess and were distributed to whichever candidate the voter had marked as number 2.

Chouinard’s elimination reduced the number of candidates to ten with Sampson ninth and Contakos tenth. That caused Contakos to be eliminated in round 30. When his votes were distributed among the nine remaining candidates – the nine who would be the new city council regardless of where they finished numerically – Sampson jumped ahead of Bartholemew Callery in the standings. So at the conclusion of the city’s count, the nine candidates elected to the council were:

Two other candidates had already filed for a recount of the council ballots, so Contakos joined in that effort. That recount would occur after the school committee ballots were counted. The council recount began on Monday, November 23, 1953. When it ended, the Election Commission held that Sampson had prevailed over Contakos by eight votes.

Contakos appealed this outcome by filing an action in Superior Court. He identified 85 ballots that he had challenged in the recount that he alleged the Election Commission had wrongly decided. After examining the contested ballots, Superior Court Judge Vincent Brogna changed how several dozen ballots were counted, leaving Contakos the winner by two votes. On December 23, 1953, Judge Brogna ordered the Lowell Election Commission to revoke the certificate of election it had earlier issued to Sampson and present it to Contakos.

Sampson appealed to the Massachusetts Supreme Court which stayed any further action – including the issuance of the election certificate to Contakos – pending its ruling in the case.

When inauguration day arrived on Monday, January 4, 1954, only eight councilors took the oath of office. The ninth seat would be filled by either Sampson or Contakos depending on how the SJC ultimately decided the pending case. Immediately after taking their oaths, the council attempted to elect a mayor, but no one could gain the necessary five votes so the election was recessed after 40 ballots.

After several unsuccessful attempts to resume the balloting for mayor – they were unsuccessful because a majority failed to vote to proceed – the council resumed mayoral balloting on Wednesday, January 20, 1954, but was again unable to elect a mayor. Through 20 more ballots (for a total of 60), Councilor Hockmeyer had three votes (his own plus Councilors Ayotte and Beaudry); Councilor Pollard had three votes (his own plus Councilors McMahon and Murphy); Councilor Janas voted for himself; and Councilor Callery refused to vote, maintaining that no vote for mayor should be taken until the ninth councilor was seated.

Oral arguments before the SJC were held on March 2, 1954, and the Court issued its decision on March 31, 1954: Sampson was the winner and should be seated on the council forthwith.

With a full council finally seated, voting for mayor resumed on Wednesday, April 7, 1954. On the 52nd ballot that evening, and the 202nd ballot overall, the final councilor to vote in that round, Henry Beaudry, surprised everyone by voting for Janas which gave Janas four votes on that ballot. However, before the city clerk could officially record the vote, Councilor George Murphy jumped to his feet and said he wished to change his vote on that ballot from Hockmeyer to Janas. That would give Janas five votes and would make him mayor. But immediately after that, Councilor Beaudry, who had voted for Janas just moments earlier, insisted that he wanted to change his vote from Janas to Hockmeyer, thereby depriving Janas of his fifth vote. After that, the council recessed for the evening.

The council resumed voting for mayor a week later on Wednesday, April 14, 1954. On the sixth ballot that evening, Councilor Ayotte, who had voted for Hockmeyer all along, instead voted for Janas which gave Janas five votes (his own plus Councilors Pollard, Murphy, McMahon and Ayotte). The vote was recorded before anyone else could change their vote and John Janas was elected the first Polish American mayor of Lowell.

One Response to 1953 City Council race decided by SJC