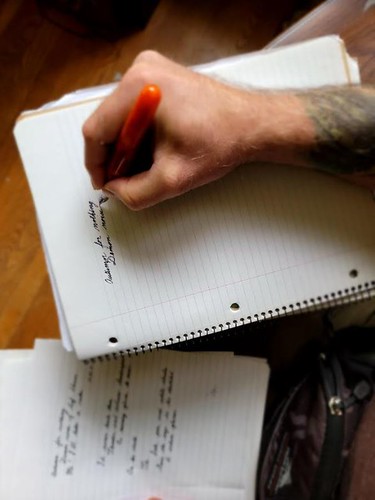 After leaving my job for a publishing company last month, I began picking up odd hours working as a substitute teacher in the public schools. You may have heard, there’s a shortage.

While this job doesn’t give me a lot of spare time, I get a lunch break in which I’m left alone in a big, empty room. During these times, I’ve started writing haiku.

In both theme (in this case, the autumn/nature) and in structure, they loosely follow the traditional practice inasmuch as I understand it. There are other approaches. Jack Kerouac wrote what he called Western haiku, in which you “simply say a lot in three shorts lines in any Western language.” He adds, “Above all, a Haiku must be very simple and free of all poetic trickery and make a little picture.” That sounds nice, although I find my lines skitter out of control without some kind of formal restraint. I did let one line go a little long. It needed the room. And I snuck a little poetry trickery in here and there.

Paul Marion brought the Kerouac Western haiku to my attention in an email exchange this morning. Something in the name alone makes me think of Johnny Depp as Bill Blake in “Dead Man,” an unconventional Western, in that other sense of the word, directed by Jim Jarmusch. At one point, Depp as Blake asks, “Do you know my poetry?” before aiming his gun past the camera and firing away.

Our youngest one is sniffling.

Kettle on at dawn.

Time to sit outside.

Yellowed by a distant sun.

These give a broken scholar

No secret, their longevity.

Slow down and eat plants.

Doug Sparks is an editor and writer living in Chelmsford with his wife and two children. His interests include books, nature, and books about nature.