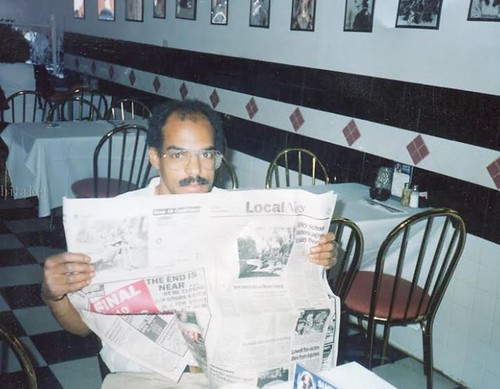 We became friends through propinquity. Bob and his wife Anne and my wife Stephanie and I were among the first inhabitants of the regal old Lamson Estate on Nesmith Street in Belvidere when it was reimagined as condominiums. The Whitakers lived on the top floor, one above us, and since both units featured rear porches with dramatic skyline views of Lowell it became opportune, as daylight faded, to convene and watch the chimney swifts, the original mosquito squad, flying aerial maneuvers over the city. On the 4th of July there were fireworks. It was a common sentiment that from our vistas the sun never set, because we could always see the red and green neon of the landmark Lowell Sun sign.

Passing through the glossily restored common areas of the Lamson Estate, I would see Bob, usually with a Nikon camera draped around his neck. I was brand new to the city, and curious about everything. I asked about his camera and learned that he worked for the Sun as a photographer—and then he unflapped a shirt pocket and showed me another camera, a small vintage Leica. In his formal role, using the newspaper’s Nikon, he covered city council meetings, local sports, entertainment openings at the Memorial Auditorium and the Merrimack Repertory Theater, auto accidents, and all-round late-night mayhem, like the great mill fire of 1987. The Leica, I would learn, was for his own stuff, the street photography which he loved: crisp, mostly black-and-white, story-laden images of the everyday.

Over the course of these initial interactions, we discovered we had life overlaps. We were both from the South Shore, so there was a kinship in remembering the beaches, and woods, and the idiosyncrasies of the towns we knew. In time, other links would emerge: a fondness for art cinema, jazz, classic rock, Viet Nam war-era history (we were both veterans), and a growing enchantment with our adopted city of Lowell. He also was interested in philosophy and religion, particularly the Tao, and could discuss it with a real understanding. But what cemented the bond, made it a friendship, was our artistic ambitions. Apart from his job, Bob was chasing a passion for his personal photography. Apart from my job, teaching college English in Boston, I was writing fiction in the evenings. I think we quietly felt this duality gave us outsider status, and outside is a good place for an artist to stand.

The condos in the Lamson Estate were small, and living quarters could be tight, but we each managed to fashion a creative workroom: mine a closet hung with a wall mirror to give an illusion of expansiveness, Bob’s a sloped attic space where one ducked going in. Since his was fractionally larger than mine and had a window, we’d often sit in there. The place was a-scatter with unpacked possessions, a turntable and speakers and boxes of LPs. Numerous plaques hung on the walls (press photographers’ association awards—which I learned only by reading them; Bob was modest to the point of being closed-mouthed about his accomplishments). At these impromptu sessions he’d bring out a pipe, as discreetly small and old-timey as the Leica. We were pretty low-key with the weed—a hit or two, just enough to tilt the viewfinder a bit. Then Bob would cue up an album—In the Court of the Crimson King and Mountain’s Nantucket Sleighride are two I especially remember—and we’d talk.

He talked about films he loved, including movies he and Anne had watched when they were dating and in the early days of their marriage (King of Hearts and Days of Heaven), and personal favorites like Kubrick’s Barry Lyndon and Full Metal Jacket, and Scorsese’s Raging Bull, from which he could recite whole passages of dialogue. On his own, he studied these films, one scene at a time, entranced by lighting and framing and mise-en-scène.

Our wives became good friends, and as couples we’d cook dinners together, the most memorable being savory paellas that Anne and Stephanie, each having spent time in Spain as undergrads, would create.

Bob was a quiet man, friendly, but self-contained. He was witty and sardonic and a keen mimic, with a Robin Williams-like gift for mannerisms. Sometimes we’d fall into riffing back and forth, improvising, or reciting lyrics to a song we dug, like Stevie Wonder’s “Living for the City.” And when Bob got going on some routine (he could do a dead-on Groucho Marx … “I shot an elephant in my pajamas” …) my jaw would ache with laughing.

He had his dark places, too (don’t we all?). They wouldn’t show themselves often, but when they did there was no laughing. Each of us had a disdain for war. He had recollections of his time in the Air Force, as a crew chief on a B52, which would fly out of Guam and make the long nighttime missions to North Vietnam as part of Operation Arc Light, carrying the 500- and 750-pound bombs that would rain down from the stratosphere upon enemy supply routes and deeply entrenched Viet Cong forces; then, mission complete, would turn and make the long flight back. One of his photographic dreams was to travel to Davis-Montham AFB in Arizona, the boneyard where some of the very aircraft on which he had flown were mothballed, left to sit in the desert air, and chronicle them. This was a dream he eventually realized and, as Anne reported, it was a memorable experience “not only for him but for me, seeing him like a little kid trying to climb up on the planes, examining them and telling me stories. Not to mention of course I had never seen one up close. They just let us out there all by ourselves.  That was a great trip.”

Dick Howe recently recalled being “…in Bob’s company at political and community events that he was photographing and he was a great guy, quiet, professional, dignified with a wry sense of humor.” This sums up Bob beautifully.  He was a familiar figure, known and liked by legions of folks, from politicians to first responders, athletes to purveyors of coffee, always his drink of choice. Small and wiry, dressed in khaki, he moved through the cityscape with stealth. He worked at invisibility, I think. If he was visible at all in his professional life, it was at the margins, in the shadows, covering but not being the story. In another life he might well have been a spy, so easily did he seem to disappear against the backdrop.

It was through Bob that I got to know and appreciate the work of his fellow Sun lensmen Dave Brow and Bill Bridgeford, and how, indirectly, I met other interesting folks, like journalists Dave Perry and Nancye Tuttle, and former Lowell cop the late Arthur “Tussy” Russell, who shared wild stories of his years on the job.  Bob took the author photos that appeared on several of my Lowell-set private eye novels and made cameo appearances in some of them.

Our “man caves” became nurseries when our daughters were born: his and Anne’s Suzanne in 1989, and Stephanie’s and my Alexandra in 1990. Robert, Jr. came along in 1993. Bob and I would take the kids in strollers over to Rogers Fort Hill Park, proud fathers sitting on a bench, yapping. In time, seeking space for growing families, we all moved out of the city. Bob and I lost regular contact. When I came to Lowell, I’d sometimes spot him—or more typically, he’d spy me, both on our own trajectories through the day, and we’d make a vague plan to get together. It seldom happened. When I learned he’d died, it had been some long while since I’d seen him last.

In the Venn diagram that can be drawn for every relationship there are the big areas of differences, the things make each of us one of a kind. But in the smaller intersection lies the richness of the human connection. At the memorial service for Bob in the fall of 2019, sadness was leavened with celebration. It was wonderful to see his children, Suzanne and Robert, Jr., confidently embarked on independent lives and careers, and Anne and members of Bob’s family, and his many friends. In addition to the people, he left behind a legacy of eloquent photographs, some of which were on display. 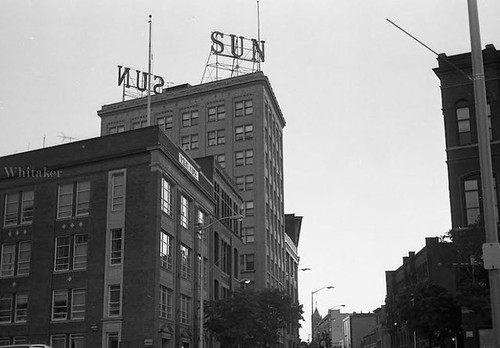 In his close to 35 years at the Sun, and some time before than at the New Bedford Standard-Times, he mastered his craft. He came from the old days, when newspapers had darkrooms and he’d shoot the story, then develop it, then work with a photo editor…  a process that changed as the world went digital. Bob would readily grant that using the Nikon was easier, but he believed that some of the magic—the “light writing” (the literal meaning of photography) was gone. I can’t comment on that point—I make do with my phone camera—but I admire the quality of the art Bob made with his mechanical Leica, with its discreet little “click.” His work is gallery quality, every bit as accomplished as that of shooters he admired, like Henri Cartier-Bresson, André Kertesz, and Robert Frank. I can easily imagine a show of his work at one of the galleries in the Merrimack Valley.

At Bob’s memorial service, a playlist of songs his family had assembled was playing. I found myself falling into one of the little riffs we used to do, the voiceover at the end of “Living for the City…” alternating the lines …

It seemed to sum up a long journey. I had to smile.