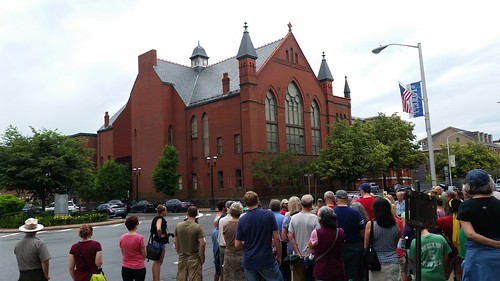 The dreaded red “X” recently was posted on the Smith Baker Center. That signals to first responders that the building is unsafe to enter but it also is an indicator that it’s unlikely the building will remain standing for much longer. Given that development, here is some background on the building and on the person whose name is affixed to it.

Constructed as First Congregational Church in 1884-85. Designed by Merrill & Cutler in the Victorian Gothic style. Constructed of red brick on a granite foundation with slate shingles. An earlier brick First Congregational Church had been on this site from 1827 to 1883. Neighboring buildings made this parcel more square than rectangle which was unusual for a church and accounted for its unique footprint and design (“auditorium” rather than “Latin-cross” style). The initial founding of this congregation in 1824 posed a challenge to St. Anne’s which had been established by the mill owners. (Otis A. Merrill & Arthur S. Cutler also designed City Hall, Central Firehouse and the Howe Building).

The congregation of the church eventually merged with that of Christ Church United on East Merrimack Street and the last service was held on Merrimack Street in 1968. At that time, the congregation sold the building to the city of Lowell which used it for the city’s Senior Center until the new facility opened on Broadway in the 2000s.

The city also utilized the space as a community center for the Acre neighborhood. On Sunday, December 14, 1969, the Acre Model Neighborhood Organization (AMNO) held a dedication ceremony which included residents and religious and political leaders.

When the “new” church was dedicated in 1885, its pastor was Reverend Smith Baker.  Here is some of what Frederic Coburn wrote about Smith Baker in his History of Lowell and Its People (1924):

Rev. Smith Baker, DD, who for a number of years was one of the best-known preachers in New England, holding pastorates in various cities, a man of learning and consecrated piety, highly regarded as a minister, and a leading light of the church in Lowell . . .

Smith Baker, the father of the Rev. Smith Baker, was born in Bowdoin, Maine, June 17, 1791, and died in Littlefield, Maine, July 3, 1871. He was a leading shoemaker of the town . . . and was a deacon of the Congregational church of Littlefield for more than 40 years, was a selectman for many years and was the president of the board of trustees of Litchfield Academy. On July 11, 1811, he married Mary Smith.

Rev. Smith Baker was born in Bowdoin,  Maine, February 16, 1836, and died in Lowell on November 10, 1917. He grew up and went to school in Litchfield. His parents were deeply religious and their son at a young age was influenced by that and decided to become a minister. He studied at Bangor  Theological Seminary, graduating in 1860. He received a Doctor of Divinity degree from Dartmouth College in 1891.

In 1860, he was ordained a minister of the Congregational church and his first pastorates (for ten years) were at Veazie and Orono, Maine. He then came to the First Congregational Church in Lowell and stayed for 20 years. In 1890, he resigned from there and accepted a pastorate in Minneapolis, Minnesota where he stayed until 1894. He then went to Boston until 1898 and then became pastor of Williston Congregational Church of Portland, Maine where he served until 1907. In failing health, he moved to Atlanta, Georgia for a pastorate for 1908 and 1909. He later returned to Lowell and was made pastor emeritus of the First Congregational, a position he held until his death.

Besides his work as a pastor, Rev. Baker was heavily involved in the larger mission of the church including Foreign Missions and national governance. He was an author on religious topics and compiled two books of lectures.

Rev. Baker married at Northumberland, Vermont, September 13, 1860, Isabelle Ditson, who survives him, a resident of Lowell who lives at 246 Stevens Street. Their only son Alvah Smith Baker was born in Veazie, Maine, March 13, 1862. He married Ida Wright and resides in Lowell.