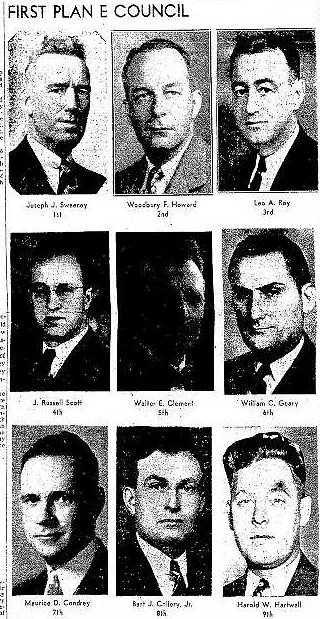 More than 34,000 Lowell residents voted in the November 4, 1942, state election. Besides selecting state officers and local representatives, the people of Lowell also chose by a margin of 16,477 to 14,135 to replace the existing Plan B form of government (a strong mayor and city councilors both elected by the voters citywide) with the Plan E form of government which featured a City Manager appointed by 9 City Councilors who were elected citywide by “proportional representation” which is better known today as “ranked choice voting.” In the late 1950s, the voters replaced proportional representation with the soon-to-expire vote for nine at large city councilors system we have now.

With activity picking up for this fall’s city council election which will be the first with the new hybrid representation system, it seemed like a good time to look back at the first election under Plan E.

Because counting the votes in a proportional representation system was a lengthy process in the pre-computer age, the outcome of the November 2, 1943, city council election was not known until November 11, 1943 (and it was only then that the 200 city election workers who had been toiling at the Lowell Memorial Auditorium began counting the school committee votes).

What follows is a day-to-day summary of the reporting in the Lowell Sun in the days following that election:

November 2, 1943 – First election under Plan E. Turnout was 29,000. There were 100 candidates for city council. There was strong turnout in the French/Republican wards and weak turnout in Irish/Democratic neighborhoods. Because of the nature of the PR ballot, the council winners weren’t determined until Thursday, November 11, 1943. At that point, counting of the school committee ballots commenced.

Wednesday, November 3, 1943 – “What looms today as a major political revolution occurred here yesterday when a surprisingly large number of voters dared drenching rain to register their disapproval of the type of government which has ruled the city for the past two decades.”

Thursday, November 4, 1943 – 40 of 44 precincts counted. Not sure of the “quota” which is the number needed to be elected. It’s expected to be about 2850. Mayor Joseph Sweeney already has 3151 first place votes so he is unofficially elected. Next is Woodbury Howard with 2454; incumbent Leo Roy,  Russell Scott, Walter Clement, William Geary.

Friday, November 5, 1943 – “Official Recording of First Place Ballots Gets Under Way.” Two days of heady excitement in the city’s first Plan “E” election aftermath today was followed by a quick let-down as the grim grind of officially recording first-place ballots, precinct by precinct, got under way at Memorial Auditorium.”

Monday, November 8, 1943 – “Excess Sweeney Ballots Allotted: Callery chief gainer with 22; Standings remain unchanged.” – “The official first count of the city’s first Plan E election was completed this morning with the transfer of the 391 excess ballots which Mayor Joseph J. Sweeney received in last Tuesday’s election. The distribution showed a surprising consistency with the general trend of the election and indicated that the mayor ran ahead of candidates from all sectors of the city. Chief gainer was Councilor Bart J.  Callery, Jr., who picked up 22 of the 391 first place votes, bringing his total now to 1025 without changing his position in the standings.”

Tuesday, November 9, 1943 – McMahon Moves Up; 20 More Candidates are Eliminated. Howard election likely at any moment; needs but 29 votes Woodbury F.  Howard was officially elected as second d member of the new Plan E council late this forenoon when he received the quota of 2869 on the 32nd count which eliminated candidate Frank E.  MacLean.

Thursday, November 11, 1943 – Barden, Hartwell in Nip and Tuck Battle for Ninth Place. McMahon apparently out after sensational spurt. 15 declared defeated. Councilor Leo A. Roy attained the official quota of 2869 on the 70th count late this forenoon when he picked up over 100 votes in the parceling-out of Bergeron ballots, as his Franco-American running mate was declared defeated.

So here are the city council winners in the first Plan E election: