Linda Whittenberg first connected with Ireland through her beloved Irish grandfather, Will Shannon, with whom she spent her childhood in the Illinois farmland where she was born. As a Unitarian-Universalist minister in the United States, she served congregations in the West before launching her voice as a poet. During Writers’ Week in Listowel, County Kerry, in 2014, she launched her book  Somewhere in Ireland (Black Swan Editions, 2014), which narrates in poetry her narrative of her experiences in the land of her Shannon ancestors. Whittenberg finds herself drawn to this “land of her ancestors” and returns often, almost annually. 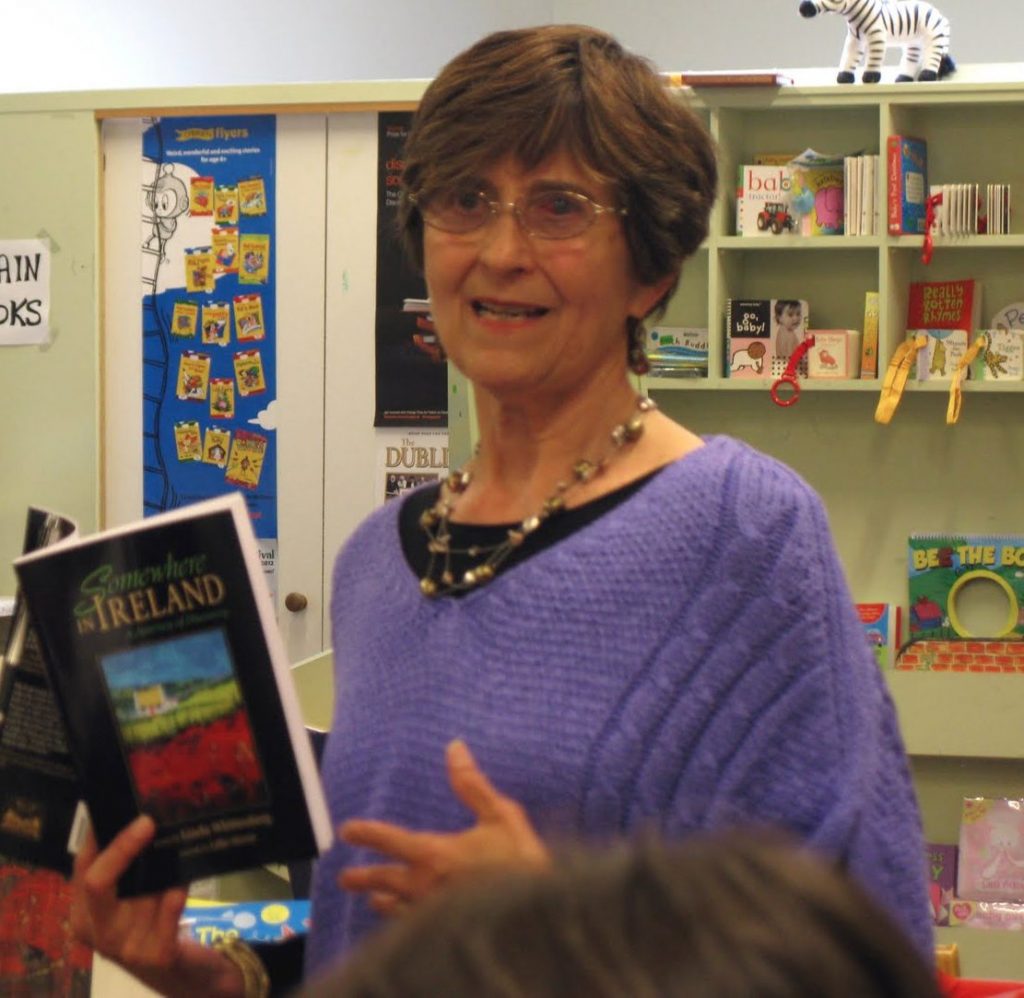 In the recent poems she shares with Trasna, Linda Whittenberg experiences the essence of her late husband, Robert Wilber, in the forms that make his formless presence both real and near. Though she has parted with so many of his belongings, his spirit is innately a part of everything that he touched and every moment that they shared–his hat, the view from the mesa, the tent. He is there, he is not there. She embraces his being and feels his loss with a tenderness that is intense and inspiring. 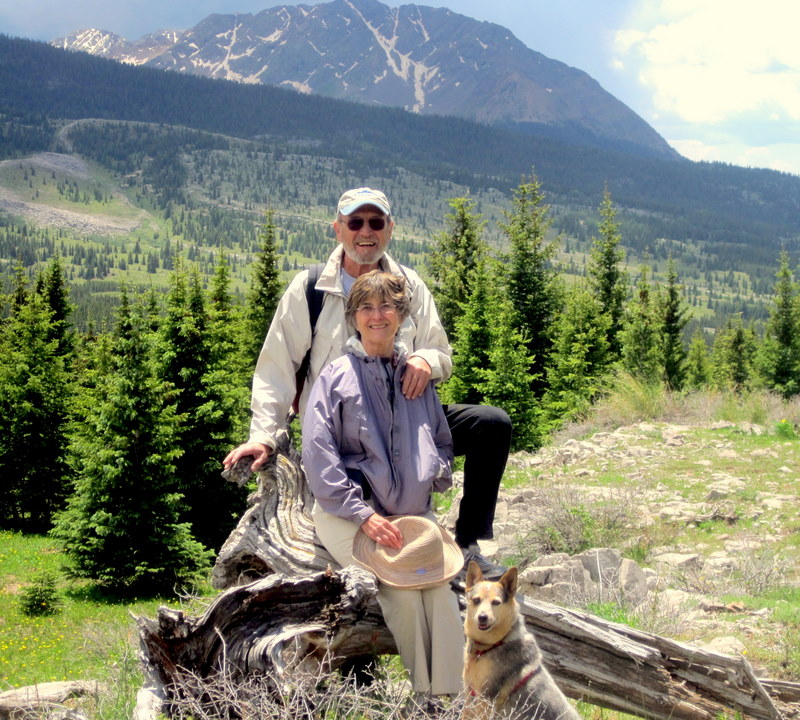 Your cowboy hat still sits as you left it

on the hall closet shelf, chin strap tied up

to shape the brim. I reach for a scarf—

Knowing I liked that hat,

you always wore it to the airport

when you came to pick me up.

my handsome cowboy, waiting to welcome

The boots I gave to Goodwill, journals

fit nicely in a drawer, wedding ring made

by our Navajo friend resides in my jewelry box.

But the question gnaws—

how long do I keep the cowboy hat

with your sweat in the band?

piles for Goodwill, the backpack

you wore up and down mountains

beaded on the interior, all kinds of gadgets

no matter where you start, the toolbox

will get you even more than the closet

or dresser or desk. For me it was because

this was the toolbox he brought

to our marriage, a dowry of sorts,

tools to fix most anything.

traces of where he gripped it

building a ramada toward the back

of the yard, a sort of free-standing porch

on a high place for the best view

of moons that rise over the mountains

and you’ll come to this—

how proud he felt, although

he wasn’t one to brag,

snuggling and swinging with his woman,

dogs at our feet,

horses and mules in the paddock,

even an exceptional goat,

glories of love in the moonlit dark.

In the midst of tumult, when sleep

is hard to secure, I wake

to step out on flagstone and study

the sky which greets me

with a crescent moon hovering close

to a morning star, a pair so brilliant

and full of hope for a few seconds

I almost forget all I am losing,

even allow a flash of delight.

so close they appear inseparable,

but I am not dissuaded from my grief,

for I know days ahead a different sky

will display another vision of reality,

still doing her part to light up the sky.

I fill the feeder.

My heart beats faster this time of year, plans form,

a ride in a convertible.

It is an especially fine spring day when you come home

from the doctor and plunk down a packet of papers

in the middle of the round oak kitchen table.

The lion paws on that table want to run. This table

That blue packet stared me down, the way two people play

who blinks first. Dr. Jackson that day he first came in the room,

saying, At last, a normal-sized person, for he too was very tall.

Today, he must have stuttered through what had to be said.

Did he look directly at you, with the news?

Dear Dr Jackson, it must have broken his heart.

I read, but the letters swarm like bees, making it hard

to take in. Why is it always spring when bad news strikes—

both my father and mother, my dear cousin, and now you?

We’ll go outside together at sunset. My Love,

the sun going down

will most surely turn the mountains blood-red.

Since You’ve Been Gone

Remember how we watched the insect-sized

bicyclist cross the vast terrain below

while we stood on the mesa? How strange

it was to realize that little dot was moving?

Then we were captivated by the thought

of him, his thighs aching, heavy breathing,

as he became human. Maybe that’s how it is.

I must look closely, for all that was you

could not have disappeared completely.

You were large, a real cowboy in your hat

and boots, and when you were on horseback,

you were grand. Your mind was expansive,

spacious enough to hold nearly all of

politics, music, nature, and much poetry.

That’s why I set aside reason and squint

to look up close, use a telescope to see far

a keyhole glimpse of you in some other form.

There are times when I reach out for you at night

in my restless stirring, and find you there

for the second before I touch the empty sheets.

wondering where the rose goes in winter.

How I fret, thinking perhaps my favorites

will not make it, and then, one spring day

I am surprised by the first budding. That’s

a way to think of it—you are not gone,

I will go to the mountain in late summer

to see if the aster seeds we planted

with your ashes have made it into flowering.

I don’t know how far away

heaven is or if there even is one,

but I keep looking. 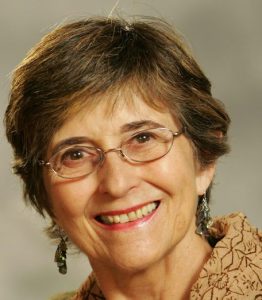 Linda Whittenberg was born in Illinois farm country, small-town America. She knew every person in that little town, and, thus, has come to know people everywhere she goes, hoping to turn the world into a small town. Moving to New Mexico in 1976, she felt she had found her heart’s true home and continued feeling that for more than forty years, even though she left for a time to attend seminary and become a Unitarian Universalist minister. She served congregations in California and Washington State. On retirement, she began writing and has published five books of poems. One, Somewhere in Ireland, Black Swan Editions, 2014, was launched during Writers’ Week in Listowel, County Kerry, Ireland. The Irish link is her Irish grandfather, the father-figure who nurtured her childhood, doing his best to make up for the father she never knew. She has returned to Ireland seven times in ten years and plans at least one more trip next year. After the death of her beloved husband in 2020, she has moved to Denver, Colorado where her three children and their families all live nearby. Her books are available through Amazon.