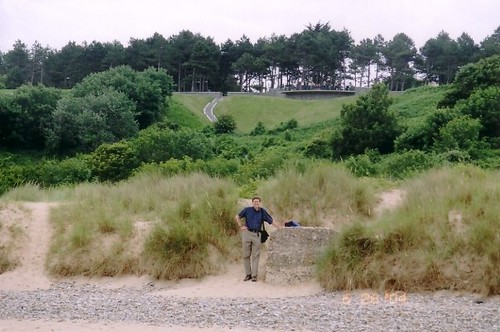 The Allied invasion of Normandy – D-Day – occurred on this day in 1944. In the pre-dawn hours, thousands of British and American paratroopers jumped into the dark and stormy night. Though they mostly landed far from their designated drop zones and in scattered small bunches, their mere presence was enough to disrupt the German response. At dawn, thousands more troops came ashore in landing craft. While none had it easy, those landing on the beach code named Omaha had the worst of it. The thousands of white crosses in the cemetery at the top of that ridge are reminders of the cost of getting off that beach.

In June 2004, my family and I spent several days in Normandy to view sites related to D-Day. Here are some excerpts from the journal I kept during that trip.

Our first stop in Normandy was the American cemetery at Colleville, right above Omaha Beach.  There are just rows and rows of white marble crosses with a few Stars of David mixed in.  Each is inscribed with a name, rank, unit and date of death.  We walked the length of the cemetery then turned to the beach.

The height of the bluff overlooking the beach is amazing.  It’s one of those things you have to see to comprehend, like Little Round Top at Gettysburg or the heights overlooking the Burnside Bridge at Antietam. We descended a path down to the beach. I sat in the sand as the tide came in, looking at the expanse of beach in both directions and tried to imagine what it would have been like sixty years ago.

We continued on the highway to St. Mere-Eglise which was made famous by the movie The Longest Day.  The first thing we saw was the church with a paratrooper mannequin hanging by his parachute from the corner of the roof.  It was eerie.  The church had two stained glass windows that incorporated paratroopers and the liberation.  We then made the rounds of the various souvenir shops.  (It’s a little like Gettysburg in that way).  Then we went to the airborne museum which, among other things, has a ful-sized Waco glider you can pass through.  It was only a frame made of steel tubing and a skin of plywood.  And the guys who rode in them didn’t get the same hazardous duty pay as did the paratroopers.  We finished there a little after 3 p.m. and headed east, cross-county, towards Utah Beach.

We spent some time walking on Utah Beach which is very different from Omaha.  Here, there’s just sand dunes off the beach with flat terrain leading inland.  Although I didn’t notice any marshland, I also didn’t see any built-up areas until you got inland.  We then entered the museum which was in a half-moon kind of recreated bunker.  There were lots of pictures, mementoes, dioramas and a few vehicles and weapons.  There’s a lot about Brigadier General Theodore Roosevelt (age 54) the Assistant Division Commander of the 4th Infantry Division who landed with the first wave.  They actually came ashore quite a bit to the left of their intended beachhead, so far that their maps didn’t cover the spot where they were.  Roosevelt is purported to have said, once they realized they were in the wrong place, “we’ll start the war right here.”  He died just six weeks later from a heart attack and is buried in Normandy.  A small building across the street is called “le Roosevelt” and advertises itself as an Internet café.

With our objective today being Pointe du Hoc, we passed through Colleville and the turn for the cemetery.  Before St. Laurent, we saw the Big Red One museum on the left side of the road.  I had seen this mentioned in one place (I forgot where) but it usually is omitted from all the Chamber of Commerce type tourist brochures.  There was a youngish guy at the entrance and we ended up speaking with him for a while when the only other visitors left.  He seemed to have devoted his life to the study of the 1st Infantry Division in World War Two (it was a “private” museum, as he put it).  Besides the usual mannequins in olive drab and web gear, he had all kinds of documents and photos in three-ring binders.  He said he had spent a week in the National Archives in Washington obtaining all of this stuff.

Leaving the Big Red One museum, we continued west and saw a sign saying something like “Choc D’Hoc” which we followed, thinking it a variation on the spelling of Pointe D’Hoc.  It wasn’t, but I’m glad we followed it anyway.  A paved road running north brought us directly to the beach.  An older stone monument was on a small plaza at the end of the road.  Behind it, on the sand, was a silver metallic sculpture that an interpretive sign said had just been installed earlier this month.  The traditional monument was Les Moulins which I thought meant “windmills,” so I may have missed the significance of it.

This inadvertent stop was important because it gave some insight into the terrain on Omaha Beach.  Stephen Ambrose’s description tells of the sand, the “shingle” that he described as a high, wide strip of small stones impossible for vehicles to drive over, then the seawall, a road running parallel to the beach and then the slope.  Here, it all came together unlike at Colleville (the cemetery) which was just the beach, some stones, sand dunes and the ridge.  And at St. Laurent, the road we drove in on went through an opening in the escarpment, so presumably this was one of the beach exits that were so heavily defended by the Germans.

After lunch, we continued west until we reached Pointe du Hoc. There was a big parking area and hundreds of newly planted trees only one foot high.  A sign said that this site had been transferred to the American monuments commission in 1979.  Walking through the tree line, you suddenly saw this vast, undulating green field sprinkled with the remnants of concrete fortifications.  The “undulating” ground was due to dozens of shell craters, presumably from naval gunfire, that have been left largely intact with green grass growing throughout.  Many of the concrete structures remained largely intact.  There were open gun emplacements with pivots and small protective walls (for air defense, probably) and large gun emplacements with about ten feet of concrete on top.  There were also bunker-like quarters (probably for gun crews during bombardment) and individual concrete fighting positions.  Best of all was that you could walk all over it.  It created a sense of what a World War Two battlefield must be like.  Unfortunately, the actual Ranger monument and the cliffs were off limits due to erosion.  We weren’t able to look straight over the side to see the exact height of the climb, but from our perch back away from the cliff you could certainly tell you were far, far above the water.

We left Pointe du Hoc and headed east for what turned out to be the final stop of the World War Two portion of our journey and that was the Colleville cemetery.  We again walked among the rows and rows of white marble crosses to the heights that overlooked the beach. The sky was perfectly blue and the grass green and the sun shining, so we loitered there for a while and ended up walking the reddish colored, tree-lined path that separated the cemetery from the escarpment, the exact setting of the opening and closing scenes of Saving Private Ryan.