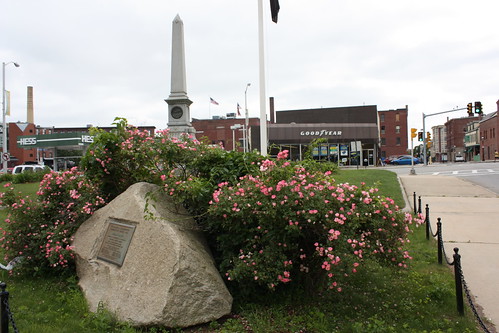 Donald Arcand (1946-1965) was the first resident of Lowell to die in the Vietnam War. Arcand was born on February 13, 1946, and lived at 130 Ford Street in the city’s Little Canada neighborhood. After graduating from St. Joseph’s High School, he worked in a shoe factory until he enlisted in the Army in 1964.

Sent to Vietnam, he served as a door gunner on a UH-1B helicopter of the 197th Aviation Company. On September 1, 1965, Arcand’s aircraft with a crew of four and one passenger was on a convoy escort mission near Ben Cat. Spotting some activity on the ground, the aircraft descended to investigate, was hit by enemy fire, and exploded in midair. All aboard died.

Arcand was survived by his parents, William J. and Helen M. (Blanchard) Arcand, two brothers, Roger and Robert Arcand, and his paternal Grandmother, Mrs. Josephine Arcand, all of Lowell. Arcand’s funeral was held at St. Jean Baptiste Church and he was buried in St. Joseph’s Cemetery.

On Memorial Day 1969 (May 25), the new road connecting Father Morissette Boulevard to Merrimack Street (part of the Northern Canal Urban Renewal Project) was dedicated as Arcand Drive and a monument in his honor was installed in Monument Square alongside the Ladd and Whitney Monument. 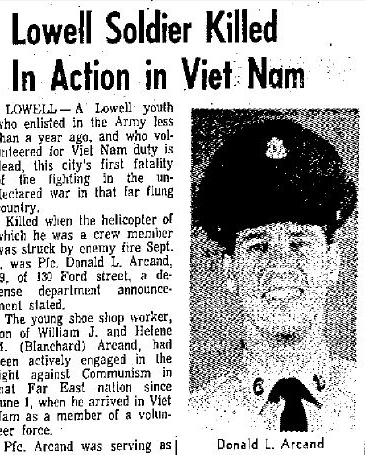