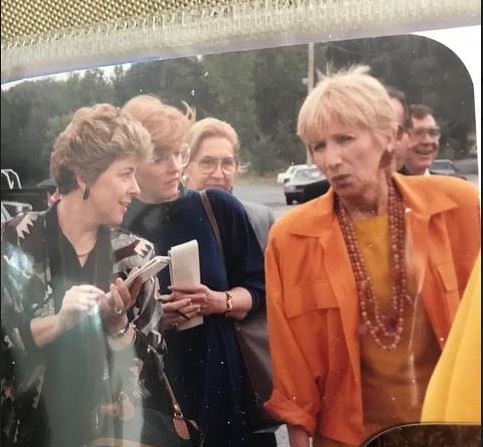 Nancye Tuttle shares with us the following remembrance of the late Lowell native Olympia Dukakis who passed away on May 1, 2021. Nancye’s story was first published in the Lowell Sun on May 5, 2021, and may be viewed here.

An interview with Olympia Dukakis was like a visit with your best friend.

I was lucky to have had that chance several times, and on each instance, she was funny, energetic, smart, down-to-earth and charming. An engaging conversationalist, Dukakis loved people, life and acting. Her acclaimed stage, screen and television career earned her praise and numerous awards, including an Oscar for Best Supporting Actress, playing Cher’s gutsy mama Rose in the 1987 romantic comedy “Moonstruck.”

Dukakis, who died on Saturday at age 89 in Manhattan, also loved Lowell, where she was born on June 20, 1931, the child of Greek immigrant parents Constantine and Alexandra Dukakis, and where she spent her first nine years in her family’s home at 57 Clare Street.

Dukakis was a proud Lowellian, who returned in triumph in 1990, after the Oscar win made her a household name and a much-sought-after character actress in Hollywood.

“I have wonderful memories of that day and seeing how Lowell had made a comeback. I am glad to hear it is still doing well,” Dukakis told me, when we chatted for her 2012 profile in a Sun section honoring great women from the Lowell area.

That sunny fall day in 1990 was certainly special.

Dukakis was being honored by the Hellenic Cultural and Heritage Society for her successful career and her love and commitment to Greek culture. But the whole city got into the act.

She and her husband, actor Louis Zorich, visited Lowell National Historical Park, where she took special interest in the Mill Girls and Immigrants Exhibit at the Mogan Cultural Center. Touring with assistant superintendent George Price, Dukakis pored over the roster of immigrants who had settled in Lowell and delighted when she found her family’s name listed.

“There it is,” she said, as I stood nearby, scribbling her words in my notebook to capture the moment for The Sun.

Park personnel did everything right that day to showcase Lowell for their honored guest. Highlights included a canal boat and trolley ride, which she loved, standing at the front of the trolley and clanging the bell.

“I remember her saying that everything seemed much smaller to her than when she lived here,” recalls artist Janet Lambert Moore, who captured the day’s events in photographs.

Riding through the Acre, Dukakis stopped by her Clare Street home and the Bartlett School, which she’d attended as a child.

“I remember putting a girl’s pigtails into the inkwell and sitting in the hallway a lot — facing the wall,” Dukakis said, when we talked about school day memories in 2012.

Other events included a Speare House reception, citations from various officials and a Durgin Hall program entitled “An Evening with Olympia Dukakis,” where she regaled the crowd with stories of her youth and long career.

She recalled her Lowell childhood with fond memories in 2012.

“I remember roller skating and bleeding knees and visiting Aunt Amelia and getting up for the Easter celebration and seeing my mother and aunt dancing with glasses of ouzo on their heads. There was so much family and we loved it,” Dukakis said then.

Dukakis and her family moved from Lowell when she was nine, since her father found work in Boston. They lived in Somerville and then Arlington, where she completed high school and then went to Boston University.

“I got into acting at Boston University in the 1950s, putting together a student revue. I loved it and discovered I was good at it,” Dukakis said in 2012.

Her career included over 100 plays, teaching acting at New York University and co-founding and running, along with Zorich, the Whole Theater Company in Montclair, N.J. for 20 years.

She was 56, with a three-decade stage career, when she got the part in “Moonstruck”, and Hollywood came calling. Other notable screen and TV roles include the catty Southern widow in 1989’s “Steel Magnolias,” opposite Sally Field and Shirley MacLaine; Kirstie Alley’s character’s mother in the three “Look Who’s Talking” movies 1989-93; and the pot-growing, transgender San Francisco landlord Anna Madrigal, from 1993-2019 in the TV mini-series made from Armistead Maupin’s “Tales of the City” stories.

Dukakis loved the work and was rehearsing for a role as Prospero — or his female equivalent Prospera — in the “The Tempest” at Shakespeare & Company when we talked in 2012.

“I have a real appetite for work, and I like to be challenged,” she said then.

Never stopping her work, she recently had recurring roles on several TV series, including “Bored to Death,” in which her character had a torrid affair with Zach Galifianakis’s. In her final film, “Not to Forget,” scheduled to open this year, she plays a judge who sentences a millennial to care for his grandmother.

“In the end, they’re the ones who will remember me,” Dukakis said, talking about her grandchildren in 2012.

But that isn’t true, because she also leaves legions of fans, including me, who loved Olympia Dukakis for her grit, friendliness, talent and class. We will never forget her.