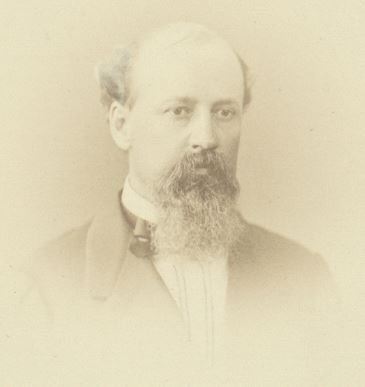 Gustavus Vasa Fox (1821-1883) was born and raised in Massachusetts and spent much of his life in Lowell. He was a graduate of the United States Naval Academy and served as an officer in the Navy from 1841 to 1856. After his resignation from the service, he returned to Massachusetts and worked as an agent for several of the big textile mills in Lowell and Lawrence.

When Lincoln was first inaugurated in March 1861, he inherited a divided country and an acute crisis at Fort Sumter, a lightly garrisoned United States Coastal Defense installation on a small island at the entrance to the harbor at Charleston, South Carolina. When South Carolina seceded in December 1860 after the election of Lincoln, its state government and militia completely cut off the flow of supplies to Fort Sumter in an attempt to force the fort’s soldiers to surrender. President Buchanan did nothing and President Lincoln had few options and so did nothing initially. However, the commander of the fort, Major Robert Anderson, got word to Washington that if he was not resupplied with food by the middle of April, he would be forced to surrender or have his men starve.

The plight of Fort Sumter was widely reported in the northern press. Gus Fox not only followed the news, he also conceived a plan he believed could get food and supplies to the garrison despite the threats from the South Carolina militia. Using his relative-by-marriage Frank Blair to wrangle an invitation to the White House for Fox, the former Naval officer from Lowell was soon presenting his plan to the President. Fox proposed leading several steamers down the Atlantic coast until they reached Charleston. There, they would remain out to sea while small boats they carried would ferry the supplies to the fort under the cover of darkness. In the absence of an alternative, Lincoln gave his assent to the plan and invested Fox with the authority needed to commandeer the needed ships, troops and supplies.

As Fox travelled to New York City and his new squadron, President Lincoln composed and sent a message to the Governor of South Carolina, telling him of the planned resupply mission and assuring him that no reinforcements or military supplies would be landed, only food and humanitarian aid. Historians today believe that Lincoln intended this letter to incite the South Carolina state government to fire upon and attempt to seize Fort Sumter before the relief fleet arrived which is exactly what happened.

Several days later, Fox and his small fleet, fighting gale force winds out to see, suddenly appeared outside Charleston Harbor. The weather prevented them from getting close but their masts were visible. That was April 12, 1861. The South Carolina militia immediately opened fire on the fort and kept up the barrage for 36 hours until the fort surrendered. The Civil War had begun, and the south had fired the first shot.

After the surrender, local vessels ferried the fort’s garrison out to Fox’s ships and turned them over to the Navy. They all sailed back to New York were Major Anderson and his men were hailed as heroes.

President Lincoln made Gus Fox the Assistant Secretary of the Navy under Gideon Welles. Fox held that post through the war. He was a strong advocate of ironclad vessels and was largely responsible for the construction and launching of the U.S.S. Monitor, the Navy’s first ship of that type. (Fox gave the city of Lowell a slab of the Monitor’s armor which is now on display at the city’s Pollard Memorial Library).

After the war, Gustavus Fox returned to Lowell and worked as the agent of the Middlesex Company, the massive woolen mill on the Pawtucket Canal where the UMass Lowell Inn and Conference Center now stands. Fox died on October 29, 1883, at age 62. He is buried in Rock Creek Cemetery in Washington, D.C.