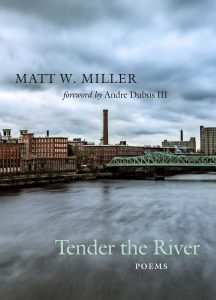 Prize-winning writer Matt W. Miller has a new book of poems in which he drills deeply into the bedrock of the Merrimack River and City-of-Lowell on its banks—as deep as any writer springing from the local watershed has dared to go.

The poems are virtuoso takes on elements of his hometown, the home place of all kinds of people for thousands of years. The red bricks showed up long after a complex bio-system had been unfolding, and Miller brings it all together.

He’s getting major traction with notices on CNN and the Daily Beast, rare for poetry, and heating up the wires on poet networks from coast to coast. Texas Review Press went back to the printer for more books after the first printing sold out. Rumor is that it was the fastest selling first printing in TRP history. 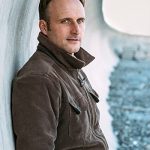 Like the river, the poems build up a strong current, surging through geology, anthropology, genealogy, sociology, biology—touching the live and the inert, the patterns and the tangents, the private and the public. Miller goes high and he goes low, unafraid to rake detritus in the ditch. Still, he pulls glory from what is bound to hatch, redeeming reality and like Jack Kerouac praising “the simple attempt” of humans to be good.

Like Kerouac, but comfortably on his own flight path, Miller takes Lowell to the next orbit, making art of a place he knows by heart and getting that art “out there” for readers near and far to take on board and transform in the capsules of their own souls.

The book is available on Amazon and at the best bookstores.

One Response to Matt W. Miller’s New Book of Poems: A Deep Dive Into Lowell