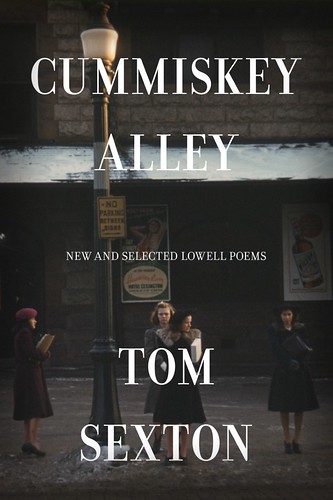 Ann Lord, a native of Manchester, NH, but a longtime resident of Alaska, recently reviewed Tom Sexton’s Cummiskey Alley: New and Selected Lowell Poems in the Anchorage Daily News. She recently shared the review with us. Here it is:

Tom Sexton, a longtime University of Alaska Anchorage professor who retired in 1994 and served as Alaska’s poet laureate from 1995-2000, has returned to his beginnings in Lowell, Massachusetts, in his latest collection, “Cummiskey Alley.” And what a return it is. Sexton, known primarily for his acclaimed work related to Alaska, nature and Chinese poets, here brings his sharp eye and inquiry to the world where he began.

“Cummiskey Alley” might be thought of as a memoir in poetry — a memoir of the boy and man shaped by a gritty New England mill town, the town as he knew and still knows it, and the history of the place and its working-class citizens. While two-thirds of the poems are gathered from previous collections, among the strongest are new work in which the older Sexton remembers, honors and shares what he won’t allow to be forgotten.

The New York Times once described Sexton as a poet who looks hard and writes simply, and that is true for this collection. There’s no obscurity here — no need to puzzle out the hidden meanings of his poems. He is acutely observant, choosing sensory details that bring a reader into the life and lives he describes. Recurring motifs include the Irish, Catholicism, food, baseball, poolhalls, rivers and bridges, and of course, the mills that were the center of Lowell life for so many years.

In the very first poem, “Monotype of the Concord River Mills,” Sexton begins, “Far from the print hanging on my wall/a few battered old brick mills remain.” He contrasts the now-derelict buildings with the glowing bricks in the print and ends with “Inside one of the buildings, my mother/is about to meet my father for the first time./Look how her auburn hair falls over one eye./All the looms are singing. This I know to be true.”

In “Triangle Luncheonette” he recalls ordering a fried baloney sandwich on his “fifteen-minute break from work” (perhaps from operating an elevator, a teenage job he writes of elsewhere.) “Your order was ready when the baloney/began to pop on the grill and its edges slowly/darkened and began to curl, then the cook/lifted it from the grill, added a little mustard/and slid it down the counter with a flourish./I imagined sharing one with my not-yet girlfriend,/who, a bit of mustard on her teeth, would fall in love.”

There are many references throughout to Sexton’s parents and other family members. Their lives as recounted were hard, with too little money or joy. In “Letting Them Go,” he eulogizes both parents in brief moments of memory or dream. His mother trusted in tea leaf readings and had to be freed from a noose around her neck. His father, “alone on the night he died,” speaks to him: “‘Please don’t put me in any more of your sad poems. You’ve always been melancholy to the bone.’”

“Melancholy” applies here. And yet Sexton’s poems also display great affection, even love, and a generosity of spirit. In “Hoare’s Fish Market,” he tells of his father buying an extra piece of cod for a neighbor “when times were good” and of the club-footed proprietor in “Bessie’s Store” who “never said no” when as a small boy he came to her door for kerosene, with a note instead of money. “Praise Poem” immortalizes by name three butcher shop workers — Gummy Cullen, Oscar Denault, and Mary French, kind people all — with additional ” . . . praise to the prized green meat/we took home, praise to sawdust beneath our feet.”

Sexton, though, doesn’t limit himself to personal and family memories. Many of the poems harken back to Lowell’s own beginnings. “Mill Girls, Lowell, Mass., 1830” describes how the women, seen at dusk through the tall windows, were “moth-like figures moving from loom to loom in light cast by whale-oil lamps.” These women, he said, would stay “three or four years.” “Stay longer and their lungs were smudged lamps/half-filled with oily cotton dust …”

The title poem, “Cummiskey Alley,” remembers the Irishman who led his crew “to dig the canals that made Lowell’s mills the envy of the world.” In the second stanza, we realize where we are in time when the narrator notices a man sitting in a car with its windows down, “… listening to a talk show host with a Boston-Irish/accent loudly praising President Trump’s wall.” As though recognizing a kinship with Sexton, the man smiles and shouts derogatory comments about Central American immigrants. In the third stanza, Sexton notes that just blocks away “a Yankee mob tried in 1831 to burn St Patrick’s/church to the ground and drive the Irish out of town.”

As a bonus to the collection, Sexton concludes with an essay, “On Becoming a Poet.” Here he describes his unpromising beginning in Lowell, his enlistment in the Army (“the first small step on my journey to Alaska and to becoming a poet”), and men and women who were major influences as he pursued an education and the means of expressing himself. For all his years in Alaska, he says that Lowell remains closest to his heart. “I have long believed that if my Lowell poems can capture the working class people who walked its streets when I was growing up, if I can get them down right, I will have done them justice and helped me understand my own past a little better at the same time.”

The Alaska-based organization 49 Writers has scheduled two events with Sexton this month — a reading and conversation on Thursday, April 15, from 6-7 p.m. and a class on the influence of classical Chinese poets on 20th-century American poets on Saturday, April 17, from 1-4 p.m. Information about both can be found at 49writers.org.

Here’s a link to the original review in the Anchorage Daily News.