City Walk: A Funny Thing Happened on the Way to the Market Basket

A funny thing happened during my city walk a week ago Sunday. It started off like any another day during Covid. After several chilly days of rain, the temps had warmed up and the sun was out in all its glory; a good day for a city walk. While pleasant enough, there was nonetheless a steady headwind that I had to lean into with no little effort as I made my way to the Tsongas Center. Having arrived at the Center, I decided to take a short break and sit on the greening grass (a first for me since the winter melt). What a luxury! I took out a bag of mixed nuts and a bottle of juice from my backpack and sat cross-legged in the sun to watch a father and his two teenage daughters learn by trial and error (mostly error!) how to skateboard in the empty parking lot across the street. What fun they were having!

After this amusing interlude, I carried on to University Crossing, planning to turn up Fletcher Street as usual to get to the Market Basket on Broadway. But after the previous days of rain, during which I remained couped up inside my apartment, I wanted to take advantage of the good weather and decided to go for a longer walk than usual. I thought I might even go as far as South Campus and turn onto Broadway from there. But when I arrived at the intersection of Pawtucket and School Street, I suddenly felt the urge to stop. For the first time in my life and after many years of living in Lowell, I decided to walk the Fourteen Stations of the Cross at the old Franco-American School, now converted to “luxury apartments for lease” according to the large to me unsightly advertisement that has replaced the school’s solid iron sign that had stood like a classic Lowell landmark on that corner for so many years. 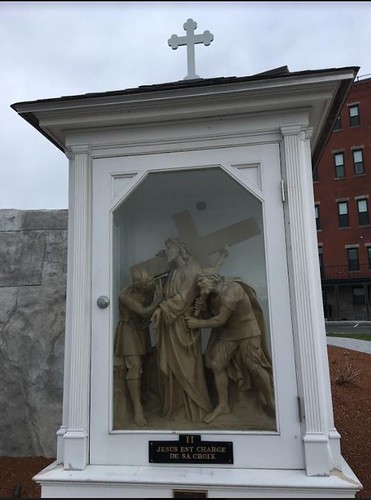 The Fourteen Stations are being completely renovated now as part of the school’s transfiguration into luxury apartments, such that in its current state of repair I had to start incongruously at the last station, where Jesus is being removed from the cross and placed in the sepulcher, and follow the stations of the crucifixion in reverse. Nonetheless, at each station, I admired the excellent renderings of Jesus and the other figures arranged in the handsome glass cases, each topped with a white cross. The face of Jesus is full of love and mercy, while the expression on the other figures is one of profound grief, in contrast to the scowling grimaces of the Roman workmen charged with ignominious task of nailing the son of God to the cross and dragging him forward with ropes.

After reaching the last stations, the first chronologically, where Jesus is condemned to death and ordered to take up his cross, I came to the steps of the large concrete hill topped with its magnificent crucifix. I climbed to the top and looked up at the cross and large statue of Jesus with its traces of blood dripping from the iron spikes ran into his hands and feet and body. In the background, “the frothing Merrimack” swelled and roared with spring thaw as it surged forward. But below the cross, it was relatively serene and calm. There was also an old oak stool at the foot of the cross for visitors to kneel and pray. I wondered if the stool was always there or just put there for that day for some reason. Remarkably, I still hadn’t realized what day it was. 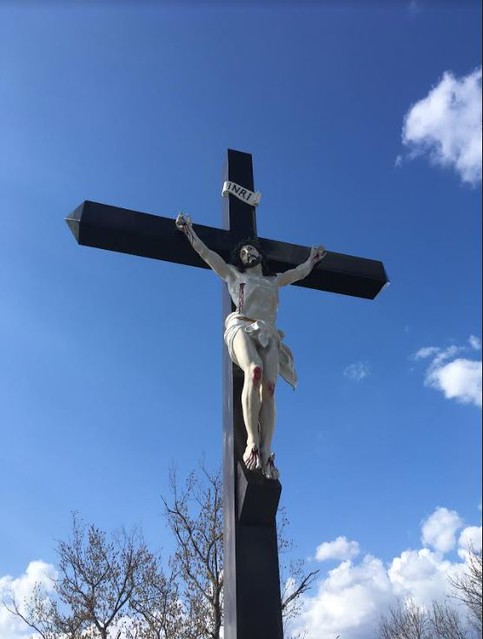 Leaving the grounds of the old school, instead of going all the way to South Campus, I decided to walk up School Street to get to Broadway. I felt a second wind filling me, and with renewed strength and vigor I quickly reached the top of the street then descended to the intersection with Broadway on the other side. I turned left and walked briskly towards Market Basket, but as I got closer I was surprised to see that the parking lot was empty. How strange! I was certain the store was open 7 days a week. Indeed as I approached the entrance, the large sign in the store’s front window confirmed the same. It wasn’t until I read the small temporary sign taped to the automatic door that I finally understood: “Closed all day Easter Sunday, April 4.”

I was shocked. How could I have not known what day it was? Has being quarantined in my apartment all winter so completely cut me off from the world and people around me? Thank God, it’s almost over! Let’s hope and pray we’ve learned something from this ordeal and are ready to do better next time.