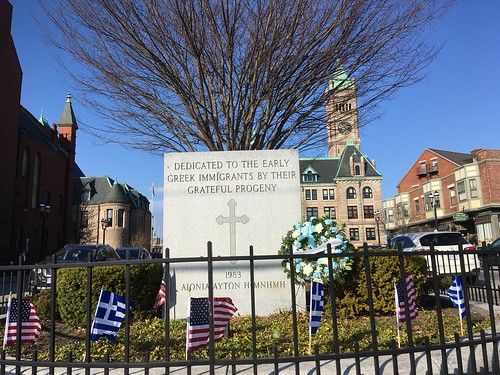 Two hundred years ago on March 25, 1821, Greek revolts broke out against the Ottoman Turks, who had occupied Greece for the previous four hundred years. Nine years later, after a hard-fought war, the Greeks regained their independence and now, each year, celebrate the anniversary of that victory on March 25, when the fight for independence began. This was cause célèbre that captured the attention of the 19th century English romantic poet Lord Byron, who joined forces with the Greeks and ultimately gave his life.

On Thursday, March 25, the two hundredth anniversary of Greek Independence, I was walking past the 1983 Greek Memorial across from City Hall that reads: “DEDICATED TO THE EARLY GREEK IMMIGRANTS BY THEIR GRATEFUL PROGENY.” And below in Greek: “MAY THEIR MEMORY BE ETERNAL.” A woman placing a wreath decorated with blue and white flowers on a stand in front of the memorial, where she had also pinned US and Greek flags in the grass. I happened to arrive just as she had finished and was getting back into her car. I hurried to catch up with her to talk, but she had already started to drive away. Like the angel of history, she looked back over her shoulder at the memorial and the wreath, and the look in her eye said it all.

According to George Chigas, the title of this post comes from a 1940 essay by the same title (Angel of History) by Walter Benjamin (1892-1940), a German philosopher and cultural critic. Here’s some of what Benjamin wrote:

My wing is ready to fly
I would rather turn back
For had I stayed mortal time
I would have had little luck.

There is a painting by Klee called Angelus Novus. An angel is depicted there who looks as though he were about to distance himself from something which he is staring at. His eyes are opened wide, his mouth stands open and his wings are outstretched. The Angel of History must look just so. His face is turned towards the past. Where we see the appearance of a chain of events, he sees one single catastrophe, which unceasingly piles rubble on top of rubble and hurls it before his feet. He would like to pause for a moment so fair [verweilen: a reference to Goethe’s Faust], to awaken the dead and to piece together what has been smashed. But a storm is blowing from Paradise, it has caught itself up in his wings and is so strong that the Angel can no longer close them. The storm drives him irresistibly into the future, to which his back is turned, while the rubble-heap before him grows sky-high. That which we call progressive, is this storm.