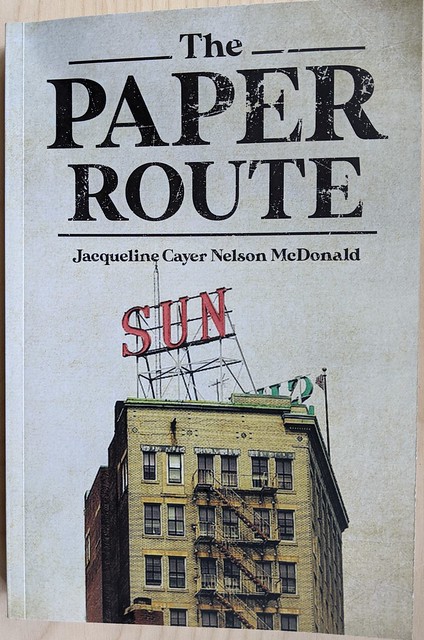 When asked to list my favorite activities, reading would be near the top. Because history would also be high on that list, most of the books I read are nonfiction. But every so often I pick up a work of fiction and am reminded why that category is so popular. That happened again when I read the recently published, set-in-Lowell murder mystery called The Paper Route by Jacqueline Cayer Nelson McDonald.

Set in Centralville in the early 1960s, the book follows the adventures of Jackie, a precocious yet rough-around-the-edges grammar school student who has the biggest paper route in Lowell and comes from a sweet, loving family that is touched by tragedy. Jackie has an intense curiosity about people and circumstances that tends to put her in harm’s way but also brings her into contact with helpful allies like police detective Dennis Dahm, who is also a central character in the book. (And with the fictional Dahm also married to Jack Kerouac’s sister, the famous Lowell writer makes a couple of more-than-cameo appearances).

Paper Route oozes Lowell from the names of streets, characters, and places to the way people dress, talk and behave. The authenticity makes it clear that the author emerged from the city (which she did) and didn’t just immerse herself in research from the outside.

Like any good mystery, Paper Route features strong characters, a complex plot, moments of tension and misdirection while also providing an ethnographic account of life in Lowell’s French-Canadian community of 50 years ago. Best of all, the book’s ending invites a sequel. I can’t wait for that.

The Paper Route is available in paperback or on Kindle.