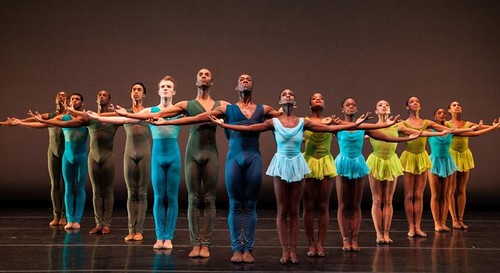 Grand Jeté or the Great Leap in
Popular American Ballet

[Author suggestion: Listen to Copeland’s Appalachian Spring while reading this]

No artist is pleased. [There is] no satisfaction whatever at any time. There is only a queer divine dissatisfaction, a blessed unrest that keeps us marching and makes us more alive than the others.

Martha Graham, choreographer, holder of the Presidential Medal of Freedom

Before 1935 ballet in the United States was not taken at all seriously as a contender in the dance world. In the creation of popular dances and dance crazes, the mastery of specialist dance techniques like tap and soft-shoe, and in the chorus line routines of musical comedy, America was second to none, but in what was taken to be very much exclusively a European genre, ballet, America so far had little to show. But in a very few years several key events transformed American ballet into a movement of world significance.

The first and perhaps the most decisive event in the rise of American ballet was the arrival in the country in 1933 of a Georgian-Russian, Georgiy Melitonovich Balanchivadze. And if you’ve never heard of that name, it isn’t at all surprising; for the sake of being more acceptable to French audiences he changed it to the far more manageable George Balanchine. As a former Russian Imperial Ballet student and Ballet Master and chief choreographer in the late twenties to the world’s most progressive and influential ballet company, the Paris-based Ballets Russes, Balanchine found that American dancers in general lacked the level of technique he required for his work. He, therefore, lost no time, along with philanthropist Lincoln Kerstein, in setting up the School of American Ballet in New York in 1934. Later Balanchine also co-founded the New York City Ballet. Like everything else in New York, the Opera and the Philharmonic Orchestra, the school and the ballet had to be the best.

If all that happened to ballet in America was that the arrival of fully developed artists from outside the country facilitated the transplanting of European traditions to the United States, if it had developed into no more than a copy of the great ballet cultures of Europe, the French, Russian and English, even a superior version of them, the story would not really be an interesting one for me. I would just yawn, put the book down and walk away. But artistically it’s never the case that America passively absorbs what it receives. Transformation is the nation’s middle name. In a very few years the choreography of native-born Americans emerged to Americanise the new ballet. And not only did a generation of new ballet works come about, a distinct American style developed, conspicuously popular in flavour, which spread beyond the conventional ballet world, reaching Broadway and then Hollywood.

One of the first ventures into American themed ballet was the Eugene Loring choreographed ballet Billy the Kid (1938) with music by Aaron Copland. It was premiered in Chicago by the Ballet Caravan Company, a group that sprang out of Balanchine’s School of American Ballet. Copland made use of cowboy and folk songs, including Get along, little doggies, in this work, which presents a fairly unsentimental view of the notorious outlaw. Loring’s career in dance is typical of the period. After gaining from his experience with Balanchine’s school and Caravan Company he started a company of his own with another exceptional student of Balanchine, Lew Christensen. Later his eclectic range and accessible style allowed him to work also in musical comedy and cinema, providing choreography with Fred Astaire and Cyd Charisse in the films Silk Stockings and Funny Face.

The success of the emerging new talents encouraged producers, directors and composers like Richard Rogers and Oscar Hammerstein to enlist them and experiment. In 1943 the billboards for the musical Oklahoma! didn’t say ‘Dance by…’, as is usual, but ‘Choreography by…’ And the name of the choreographer was Agnes de Mille, daughter of Hollywood director William C. de Mille and niece of legendary film mogul Cecil B. de Mille. The ground-breaking musical contained an unprecedented 15 minute long ballet sequence that played an integral part in the audience’s understanding of the relationships between the main characters. Naturally, the roles were cast on singing ability, not dancing, and doubles danced their parts in the ballet. After the great success of ballet in Oklahoma!, it seemed every musical had to have one. Carousel, Paint Your Wagon, Brigadoon, Allegro, Goldilocks, On the Town and Weill’s One Touch of Venus and Street Scene all had ballet sequences.

Choreographers who were ballet trained were at an advantage; they could very often cross over into musical comedy, but without the strict training in the movements and positions of ballet, musical comedy trained dance masters could not make the crossing in the other direction. In many later musicals we see dance sequences that are a hybrid of standard chorus line dance and ballet. Jerome Robbins’ work on West Side Story is a magnificent example. Robbins’ part in the popularising and Americanising of ballet cannot be overstated. Like de Mille, Robbins worked with another new transforming institution, the American Ballet Theatre, founded in 1939. With them, Robbins choreographed the not as yet famous Leonard Bernstein’s ballet Fancy Free. The Ballet is set against a scene of wartime New York where three sailors on shore leave use their freedom and let themselves go in the big city. It was the predecessor in storyline to Bernstein’s musical On the Town, also choreographed by Robbins. Later Robbins worked with the New York City Ballet but moved easily between classical ballet and his work on Broadway with numerous hit musicals to his name: The King and I, Call Me Madam, A Tree Grows in Brooklyn, Wish You Were Here, Fiddler on the Roof and many others.

De Mille’s work on a musical with a Western setting came on the heels of her success with a Western ballet, Rodeo, again with music by Aaron Copland. Copland’s music relied heavily on actual American folk music and dance and Pete Seeger’s mother, Ruth Crawford, transcribed one of the folk songs Copland used. Copland’s ballet work grew out of a belief he shared with de Mille about the need for accessibility in art. It mirrors the anti-elitist Gebrauchsmusik (music for use) movement that started in Germany before the rise of Fascism. It is a misinterpreted and often ridiculed concept, and it simply means music that naturally arises from and relates to the world of the common listener (the ‘common man’ for whom Copland wrote his Fanfare, if you will). The main exponent of Gebrauchsmusik in Germany was Paul Hindermith; an unfortunate advocate perhaps, since he showed very little capability of delivering on his promise. Undeniably, Copland and Kurt Weill, the former musical collaborator of Bertolt Brecht, were far more successful in America at producing music which could be accepted and embraced by the average listener. They showed that the everyday did not have to sound workaday. I’ll quote here something written about Copland’s music not by a famous figure or authority, but a comment made by an anonymous person on You Tube: I love that the composer who best captured the beauty and majesty of the United States was a Jewish kid from Brooklyn born of immigrant parents. What’s more American than that?

It’s well to understand what this new American ballet actually looked like and how it differed from the older, classical ballet. Firstly, a fundamental change: gone was the world of fragility and grace popularized by Degas in his paintings, gone the old style of ballet costumes, particularly the tutu, and in came conventional clothing contemporary with the ballet’s era, trousers or jeans replaced leggings for the men. Many classic ballet movements either no longer appeared or were modified or used far less frequently. Ballerinas dancing endlessly on points or pirouetting with the guidance of a male partner disappeared, as did a large corps de ballet dancing in synchronized formation, penché or dipping movements and arabesques on one leg were performed far more briskly and ruggedly; they had to conform to a consciously less decorative, more explicitly mimetic dance regime.

Copland’s ballet of 1944, Appalachian Spring, is a simple tale of settler newlyweds and the life they will face together in 19th century Pennsylvania. For this work, Copland chose Martha Graham as his choreographer. Whereas De Mille had known the best of European ballet tuition, and had studied in London under the incomparable Antony Tudor and Dame Marie Rambert, Martha Graham may be considered a wholly American product, an original, a graduate of the recently created Denishawn School of Music and Related Arts. As well as being derived from standard ballet, her choreography originated in many popular sources, such as dance hall, barn dance and the eccentric steps of vaudeville routines. For her work with Copland on Appalachian Spring she produced a style that is characterized by slow, linear movement, dancers often simply walking across the stage. Static tableau-like freezes punctuate bouts of movement, unoccupied dancers remain on stage like living props. Dance movements in Graham frequently end with the dancers on their knees, crouching or sitting on the ground. Hands are used in a sinewy, expressive manner; seldom to suggest grace and elegance like a dancer in Giselle. The atmosphere of gentility and formality created by 19th century ballets is replaced with a disconcerting jaggedness, unpredictability and rawness.

On the other side of the Atlantic Robbins became known from films as a popularizer of ballet but it was always Martha Graham’s name that represented the experimental and tradition-breaking side to American ballet. I have to admit that as a young man of 25 when the Martha Graham Ballet made a rare visit to London, I found it difficult to absorb a whole evening of this to my mind quirky and unsettling artist’s creations. Later I learnt uneasy acceptance of Appalachian Spring and came to like her more personal and sensual ballets with classical and timeless settings. Martha Graham was possessed – the word is not too strong – with a mission to teach the world a new way of perceiving dance; the Graham technique of dance movement is regarded as one of the corner stones of modern American ballet and is taught around the world.

Alongside Graham, Loring, de Mille and Robbins have come other illustrious names like Anna Sokolow, Merce Cunningham, Twyla Tharp and many others. All the major towns in the United States now have their own professional ballet companies and the two pioneering New York companies became world class in less than a decade after their founding. The confidence that has come about in American ballet and its wide appeal is no better illustrated than by the emergence in Harlem in 1969 of an African American company whose international reputation at their peak outdid that of the Globetrotters. Everyone wanted to see the Dance Theatre of Harlem and it was one of the great privileges of my life, an opportunity to be grabbed, to see them on tour in the UK over forty years ago. It’s because of the indelible impression left by those early explosive contacts with American ballet that I’m writing now.

The combination of exceptional artists who came to the country and homegrown talent has given to America not just classic ballet to rival the best in Europe, but uniquely American ballets and choreographic styles, and it gave an impetus to the wider use in theater and film of ballet of a kind that didn’t recognize any barrier between art and entertainment. It was the very best and it was for everyone. And what’s more American than that?