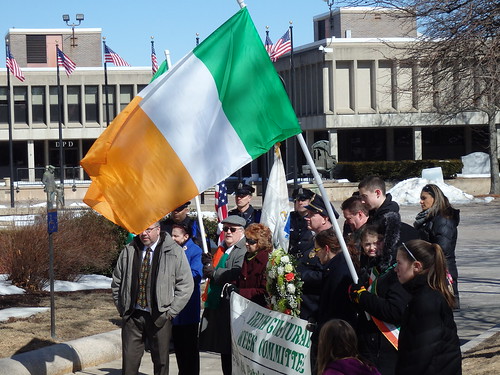 March 17, 2021 – With the pandemic lockdown still upon us, we are deprived of our “traditional” celebration of St. Patrick’s Day. This Paul Marion post from March 17, 2011, captures what Lowell is usually like today. For me, it evokes some nostalgia and brings some hopefulness for the not-too-distant future.

I guess I haven’t been downtown on St Patrick’s Day for a couple of years, otherwise I wouldn’t have been surprised to see the street festival that this day has become in Lowell-town. I had meetings downtown between 3 and 5 p.m. It was Green Halloween. Bunches of people in emerald T-shirts and green plastic derbies, clusters of young girls in Irish step-dancing outfits, serious party animals with New Orleans-type bead necklaces, accountants in green neckties and soft plaid caps, dogs sporting shamrock bows—the whole American Irish parade, authentic and wannabes, made the scene in the welcome sunshine. Maybe it was a little crazier this year because a winter like the one just past makes us all a little nutty.

The day began early at the UMass Lowell Inn & Conference Center with the annual City Manager’s St Patrick’s Day Charity Breakfast. About 400 people gathered for the mostly lame jokes and camaraderie. These community breakfasts are big producers of social glue, the invisible psychic stuff that binds people to one another in their place of living and working. It’s as old as breaking bread together in the desert. Daylight Savings Time, March 17, the impending official first day of Spring and then Opening Day, a turn for the warmer in the weather—all these combine to shut down the cold, dark months-long run of winter.

Central Street flowed as greenly as that river in Chicago that gets dyed Kelly on March 17th. The revelers, and this was the early shift, poured south toward Major’s on Jackson Street, where a big tent was empty and waiting, while another current of celebrants drifted the other way past Cappy’s, patron-jammed and jamming with tunes, onward to The Old Court, running over like a Guinness with extra head and turned into an open-air public house with all the windows swung wide so that a low roar wafted across the street.

The Dubliner and Blue Shamrock on Market Street pulled the crowd down that way. If you kept going, even the Olympia was serving a fine plate of corned beef-and-cabbage, topped off with a view of venerable St Patrick Church, one of the Acre anchors. One waiter there, Tom, is 100 percent Irish-American, and looks forward to stage two of the UMass Lowell-Queens University archeological dig in the churchyard. “I want to see what they come up with next time,” he said when my friend Tony and I stopped in for lunch.

Bourbon Street has its own character, and Mardi Gras is THE day in New Orleans, but St Patrick’s Day in Lowell, Evacuation Day for the state employees, appears to be our city’s March Madness, when the winter blues get chased out like the imperial British were sent packing from Boston. And I was not even around for the night shift.