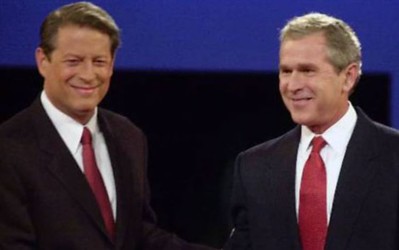 The extra-Constitutional drama that accompanied yesterday’s procedural (as opposed to adjudicatory) counting of state electoral votes by Congress made me recall the contested presidential election of 2000. Here is an essay I wrote back then. It is in two parts: one before the outcome was determined; another afterwards. Remember as you read that the time when this was written predated social media and smart phones with the internet something much different than we have today.

The Presidential Election of 2000

The Presidential election of the year 2000 was finally decided on – well, it has yet to be decided, and it’s already November 26, 2000, nineteen days after election day. Since early in the morning on Wednesday, November 8, Florida has loomed as the key to the election. George W. Bush has led by no more than 900 votes of the more than 6 million cast in that state. This coming Friday, the United States Supreme Court is to hear arguments. There’s a sense that we are witnessing history, but there is also a sense of contentment with the system, that it will all work out in the end. Other than the candidates and the news media, no one seems all that agitated.

This is called the closest presidential election since 1876 when Rutherford B. Hayes defeated Samuel Tilden. Tilden, apparently, won that election, but it was so close that the House of Representatives decided the outcome. In a deal that brought an end to Reconstruction, Democrats in the House agreed to elect Hayes president.

This year, tension was high on Election Day. Early reports indicated record turnouts around the country. While all the polls indicated Bush was ahead, if Gore could win key states such as Michigan, Pennsylvania, and Florida, he might prevail in the Electoral College, even if he lost the popular vote. Early on election night, things looked good for Gore. The networks projected him the winner in the three key states, and the winner in other states that he was expected to win. Certainly, there was no evidence of a Bush landslide.

At 10:30 P.M., the networks “pulled back” their projection of a Gore victory in Florida, attributing it to a “data entry” error of exit poll information. Bush seemed resurgent, capturing Tennessee and Arkansas. Still, Gore pulled out New Mexico and California. As the evening wore on, it was apparent that Florida was the key to the election, but after getting burned by their earlier projection, the networks would only say that it was too close to call.

I went to bed at 1:00 A.M. Bush had 246 electoral votes to Gore’s 242. To win, 270 were needed. Although a few states remained undecided, Florida remained the key. Whoever won it would win the election, and Bush was leading 50% to 48% with 90% of the precincts counted. Before going to sleep, I tuned a portable radio to WBZ and left it next to my bed. For some reason, I awoke at 2:30 A.M. and flipped on the radio, only to hear that the networks finally were projecting George W. Bush the winner in Florida and the next President of the United States. I turned off the radio and fell back asleep.

Shortly before 5:30 A.M., I awoke and rushed downstairs to catch the TV news. The TV anchors were all saying it was too close to call, and for a while I thought I was watching video filmed the night before prior to the Florida result. Someone soon explained what had happened. At 2:30 A.M., the networks had projected Bush, who had a 10,000-vote lead, the winner in Florida. Gore called Bush, congratulated him, and his motorcade began its drive from his hotel to the auditorium where his supporters waited to hear his concession speech. On the way there, however, the final votes in Florida were going Gore’s way. Soon, one of his aides contacted the motorcade and told them not to let Gore concede. After some discussion, Gore called Bush back and withdrew his concession.

And so it has remained, for nearly three weeks. In the immediate aftermath of the election, there was much said about a confusing “butterfly” ballot in Palm Beach County that led many who intended to vote for Gore to mistakenly chose Buchanan instead. Because of the narrow margin, state law required an automatic recount. Since many counties used punch card ballots, that only meant that the cards would be run through the machine again. Gore filed for manual recounts in Palm Beach, Broward, and Miami-Dade Counties. Bush seemed to depend on his campaign co-chairs (his brother the governor and the Secretary of State) to cut short any recounts, certify his victory, and make him the president.

There has been much debate about the merits of manual recounts. Having been through several of punch card ballots, I know that hand recounts are far more accurate since intended votes do not always dislodge the small, perforated rectangle (the now famous “chad”) in the corresponding spot on the card. Such marginal votes typically occur for both sides, usually in rough proportion to the votes the candidates received. Because these recounts were only to be conducted in three predominantly Democratic counties where Gore won by wide margins, Gore presumably would pick up enough votes to take the lead. Consequently, the Republicans have fought desperately to prevent or disrupt these hand recounts. It seems they may have succeeded since Miami-Dade abandoned its hand recount, and the others used more stringent standards, ignoring many “dimpled” ballots that should have been counted for Gore. It does not appear that Gore has captured enough votes to overtake Bush.

The final result will not be determined for a while, though. The United States Supreme Court has agreed to hear a Bush appeal – the legal maneuvering is all quite murky. Oral arguments will be held this Friday. Until then, the rhetoric is heated, and many people are growing tired of the partisan sniping.

On December 13, 2000, thirty-six days after the election, Al Gore conceded. George W. Bush would be the next president of the United States. The outcome of the election was determined by a five to four vote of the United States Supreme Court, announced the previous day. Neither the judiciary nor the legal community acquitted themselves well in this episode.

The first significant ruling occurred on November 21 when the Florida Supreme Court ruled that contrary to the stated intentions of Secretary of State Katherine Harris, hand recounts must be included in the certified vote total. But some behind the scenes shenanigans by the mayor of Miami, who Gore thought was supporting him but who probably cut a deal with Bush supporters, caused the Miami recount to be abandoned. The other counties did not complete their recounts by the November 26 deadline, so Harris appeared on television that Sunday night to certify the results and proclaim Bush the winner.

Gore’s hopes remained alive, resting now in the Tallahassee courtroom of Judge N. Sanders Sauls. The issue in this trial was whether hand recounts should be held. Ballots were transported from southeastern Florida to Tallahassee in the northwest, on a Ryder rental truck in a televised convoy reminiscent of the famous O.J. Simpson white Bronco chase of a decade ago. Surprising many who knew anything about recounts, Sauls ruled against Gore who promptly appealed to the Florida Supreme Court.

On Friday, the Florida justices, on a four to three vote, ordered an immediate hand recount of all ballots in the entire state that registered as blank votes during the machine count. Gore supporters, me included, felt a surge of optimism, the first since election night. I was resigned to a Bush presidency, but this seemed an amazing reversal. The decision was aided by Gore’s victory in the national popular vote by more than half a million votes.

The Democratic euphoria was short lived, however. On Saturday, December 9, the United States Supreme Court enjoined any recounts in Florida until it rendered a decision. Arguments were held on that Monday and on Tuesday, Chief Justice Rehnquist and Justices Scalia, Thomas, Kennedy and O’Connor decided to end the matter. Stevens, Breyer, Ginsburg and Souter dissented, with Stevens observing that, with its decision, the majority sacrificed the court’s reputation for staying above politics. Indeed, those justices who snatched the decision from the highest court of Florida were long-time champions of judicial deference to state courts. But they are also advocates of the judicial doctrine of “finality.”  Judges, conservatives especially, see “a final decision” as a positive good, one that must be achieved despite doubt about the accuracy or justice of the result. Thus, defendants remain in jail despite new evidence of their innocence because the system desires finality.

And so, on Wednesday night (December 13), Al Gore addressed the nation on live television. He was relaxed, engaging, humorous – all the things that were missing from his campaign persona. Ironically, it took him losing to let his true personality emerge. Some pundits suggested that Gore’s stellar performance indicated his status as front-runner for the Democratic nomination in 2004. That speculation died quickly, however, buried by numerous unattributed quotes from prominent Democrats who said, in effect, that this guy blew a sure win, and you don’t get a second chance after doing that.

George W. Bush followed Gore on television that night. He was gracious and seemed a bit more relaxed. He began naming cabinet members and people shifted their interest to preparing for Christmas which was less than two weeks away.