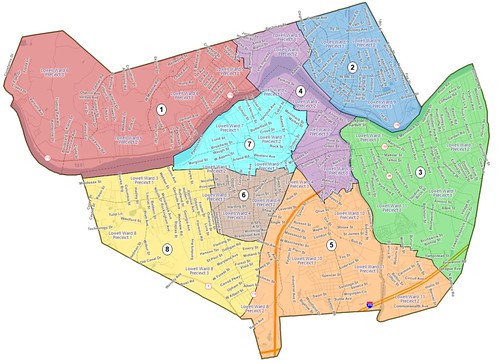 The city of Lowell has released map showing the eight proposed districts that will each elect a City Councilor in the November 2021 city election (NOTE: An earlier version of this post referred to the preliminary map shown below which has since been superseded by this map which changed the identifying number of each of the districts). Each district contains about 13,300 people. The boundaries will not be finalized until the spring of 2021 when the results of the 2020 census are released. But for planning purposes, the boundaries of the eight districts have been established.

Below is a narrative description of the boundaries of each of the eight districts. The description of the district boundaries begins in the upper left corner of the district and proceeds clockwise. To simplify the description, I’ve mentioned main roads even if the proposed boundary extends slightly beyond that road. And just to remind people of directions, Dracut is to the north, Tewksbury to the east, Billerica and Chelmsford to the south and Chelmsford and Tyngsborough to the west.

At the end of each boundary description is a demographic breakdown of the district. (Per the court settlement, at least two of the districts must have a majority of residents who are members of minority groups). After that, is list of the current wards and precincts that are within the proposed districts.

Centralville. Beginning at Burnaby Street and the Dracut line, bounded to the north and east by the Dracut town line; to the south by the Merrimack River; and to the west by Aiken Street to Dalton Street to Burnaby.

East Pawtucketville, Downtown, and Chapel Hill. Starting in Pawtucketville at Sparks Street and the Dracut line, bounded to the north by the Dracut town line to Burnaby Street; to the east by Burnaby, Dalton, and Aiken Streets, with the northern bound continuing along the Merrimack River to the Concord River; bounded to the east by the Concord River to Rogers Street; then bounded to the south by a zig zag course of Rogers, Merrill, Lawrence, Swift, Chase, Mead, and Floyd Streets to Central Street. Then the southern bound continues along Central Street to Thorndike; then the western boundary continues along Thorndike to Dutton; then along Dutton to Arcand, along Arcand to Father Morissette Blvd, and then along Father Morissette Boulevard to the Merrimack River (at the Howe Bridge); then out University Ave, to Fourth Ave, to Sparks Street and the point of beginning.

South Lowell. Beginning at Thorndike and Chelmsford Streets, bounded to the east by Thorndike St to Central; bounded to the north by Central, Floyd, and the other streets listed as the southern boundary of District 5, to Rogers Street and the Concord River; then south along the Concord River to the intersection of Billerica and Lawrence Streets; then along Epping, Burton and Roper Streets to Rockingham Street; south along Rockingham Street to Lawrence Street; east on Lawrence Street to Boylston; south on Boylston to the Tewksbury line; then running to the west (forming the southern boundary) along the Tewksbury, Billerica, and Chelmsford town lines to Cross Point; then a western boundary along Chelmsford Street back to Thorndike. 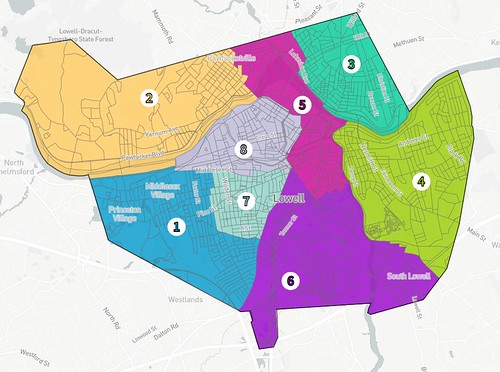 OUTDATED MAP. This was a preliminary map that was superseded by the Nov 4, 2020 version shown above.