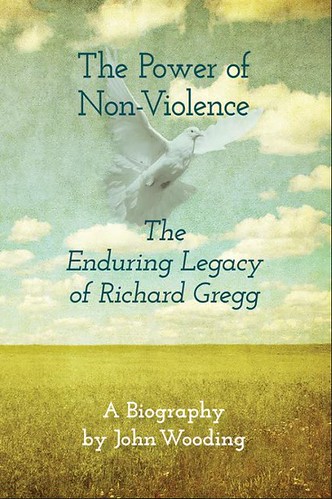 The Power of Non-Violence: The Enduring Legacy of Richard Gregg, a Biography by John Wooding

A Review by Chath pierSath

I had no idea who Richard Gregg was until I read The Power of Non-Violence: The Enduring Legacy of Richard Gregg by John Wooding.

The book could not have come at a better time considering what has been happening the last four years of the Trump Administration and the continued wars we still wage in Afghanistan, Iraq and Syria.

Violence filled the daily TV screens. The killing of George Floyd stirred up the Black Lives Matter movement. Peaceful protests versus those who resorted to violence in order to be heard. Smashing, looting, and burning of buildings and properties in utter chaos. Added to the fire, we have a leader who used division, hatred, us-and-them tactics to stay in power. No calming words came out of his mouth. The United States had a bully in the White House like it was his one-man reality TV show.

In the last century, humankind made much progress in science and technological advancement, leaps and bounds. Yet, we still go to war for capitalism. The chasm between the rich and the poor gets wider. Globalism brought nostalgia for the old world of the baby boomers —- a world of Leave It to Beaver, of racial segregation, steel plants and car manufacturing and coal mining. Mr. Trump was that guy to bring it all back. He was willing to do anything, even using the Bible, which he probably hadn’t read, to justify blowing tear gas at peaceful demonstrators.

President Trump epitomizes this “. . . competitive capitalist net of ideas,” which he, as one of the . . . “Holders of power will hold it . . . Even though . . . breakdowns go on all around them they will try to hold to their power. Power is what they want. No matter how appalling the win, no matter how much crime, disorder, unemployment, starvation and war exists, they will cling to their power.” (The Power of Non-Violence, page 56).

How then, would non-violence be of relevance in today’s world? We have already moved beyond the Trojan War or the war of conquest, the imperial wars the West had waged across the globe. We are at present still warring, but often over trade and economic inequity. If we are looking ahead, even more worrisome are the wars of the future, with artificial intelligence or robot soldiers to do our biddings, to shed each other’s blood, to stampede over humanity’s aspiration for a harmonious world. Are we doomed?

Pessimists would say so. Optimists would quietly encourage the individual conscience and call to power these voices of the past to remind us there’s still a bit of hope.

The Power of Non-Violence does just that. From one man, this idea had taken hold and seeded itself in the American psyche. Self-annihilation can be stopped not by violent means but through pacifism, voluntary simplicity and non-violence, ideas seeded by Gandhi and Richard Gregg, who brought new ideas about methods of non-violent resistance to the West. Martin Luther King, Jr., and others who followed him employed his tactics.

Richard Gregg, who in the 1930s wrote a book that is also called The Power of Non-Violence, had slipped into obscurity. Now, with this biography, he is being brought back into the light, and the relevance of his non-violent philosophy is even more needed in our individual conscious decision to fight for social and political justice.

The first biography Gregg traces the life of one man: how he grew up, his family, his career as a lawyer and one decisive moment that led him to pursue a different path contrary to what he saw and experienced during the heyday of the American Industrial Age. The rise of labor unions, immigrants flocking to America, the question of gender inequality, racial segregation and the civil rights movement—-all had brought into question this notion of democracy and human rights —- how to achieve a better world, a better America through alternative pathways to political discourse through non-violence.

“If we want a better world, we must be prepared to do some careful thinking. It is time we stopped being sketchy on a matter that touches us all so closely. For in reality this matter of handling conflict constructively is of immediate concern to everyone who has ever been angry or afraid, resentful, revengeful or bitter; who has ever taken part in a fight, mob violence or war; or who has been the object of anger, hatred, exploitation or oppression.”

In a speech at the Beulah Baptist Church in Montgomery, Alabama, on June 18, 1956, Martin Luther King, Jr., said, “nonviolence means avoiding not only external physical violence but also internal violence of spirit. You not only refuse to shoot a man, but you refuse to hate him.”

The Power of Non-Violence: The Enduring Legacy of Richard Gregg, a Biography by John Wooding ($20, Loom Press, 2020) Order copies at www.loompress

2 Responses to A Review of “The Power of Non-Violence”