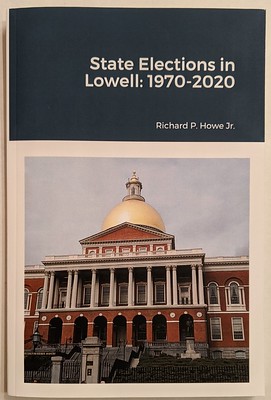 My latest book, State Elections in Lowell: 1970-2020, is now ready for purchase from the Lulu.com print-on-demand service. The book covers all Massachusetts state elections held during the past 50 years. For each election, the book shows candidate names and vote totals for all Federal and state offices that appeared on that year’s ballot in the city of Lowell. This includes President, US Senate, Congress, Governor, Lt. Governor, Attorney General, Secretary of State, Treasurer, Auditor, State Senate, State Representative, Governor’s Council, District Attorney, Clerk of Courts, Sheriff, Register of Probate, and Register of Deeds.

Also included in the book is a list of all who have held each of the above-named offices, the makeup of the various electoral districts over time, and a section on all Massachusetts Congressional Districts (the geographic makeup and who held the office) for the past 50 years.

While the book is Lowell-centric, those outside the city will find it useful because it covers all statewide offices in detail.

State Elections in Lowell is a companion to my earlier book, Lowell Municipal Elections: 1965-2015, which is also available as a print-on-demand book.

To give readers a taste of the content and layout of the State Elections book, here is the chapter on the 1978 race:

Auditor – Thaddeus M. Buczko. In the general election, Democratic incumbent Thaddeus M. Buczko (1,189,562) defeated Republican Timothy F. O’Brien (643,096). In the Democratic Primary, Buczko (448,294) defeated Peter G. Meade (304,218). In the Republican Primary, William A. Casey was unopposed and won the nomination, however, after the primary, Casey withdrew his candidacy. The State Republican Party selected O’Brien to be the party’s nominee.