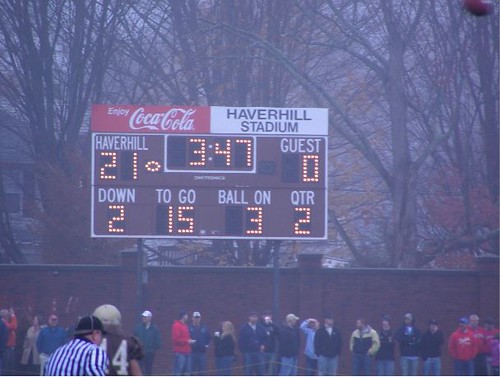 Even as we stepped out the front door
into the welcoming late morning sun
to climb into the jeep for the drive to the high school game,
Dad, my brother, and I anticipated the hours
when we would sit in shadows.

John and I layered unzipped jackets
over flannel shirts,
stuffed our stocking caps
into our pockets,
wore two pair of our thickest socks.

Dad dragged out his red wool jacket,
tugged on his checkered hunting hat
with the foldable ear flaps,
and carried a wadded army blanket
under his arm.

Arriving inside the stadium,
Dad always directed us to seats
in the concrete grandstand that
formed a bulwark between
hometown fans and the afternoon sun.

I still remember those hard plank seats:
up five rows –
just high enough to see over the railing-
and as close as we could get to the fifty yard line.

As we waited for the game to start,
sunlight flowed high over our heads
and splashed down on the north side of the field
where fans and players from out of town
bathed in the glow of fight songs
pumped out by their school’s band.

I always envied the teams from away –
from Lowell and Lawrence, Salem and Manchester –
teams with uniforms bright and colorful
as crisp red maple leaves,
or fresh mowed grass on a midsummer’s day,
or cloudless skies over the Atlantic.

When the home team trotted out to huddle
along the shadow covered sideline
in uniforms the colors of fallen birch leaves and mud,
a bass drum pounded like an unshakeable headache
and the prevailing winds scattered
the school’s fight song downriver.

After the kickoff, I zipped my jacket to my chin,
pulled my stocking cap over my ears
stuffed my hands into my pockets,
and began checking the light bulb display
on the scoreboard beyond the west end zone
between every play
for down and distance and,

time until the referee would signal the half
and the stands would empty
as fast as a shoe factory
when the lunch whistle blows.

At the break,
we devoured French fries  served in cardboard cone cups,
drenched with vinegar, dosed with salt-

And we gulped cups of watery hot chocolate,
hoping by some miracle
the liquid would insulate us
against the second half cold.

When we returned to our seats,
the three of us crammed together.

Dad stretched the green wool blanket
across our laps to keep the cold off our thighs and knees.

We pounded our feet between plays,
to shake the cold out of our feet.

No matter the score,
never mind the temperature,
we persevered until the last whistle sounded;

To leave early would betray
our support for the hometown players

And besides,
since Dad paid good, hard earned cash
for our tickets,

we needed to get our money’s worth.