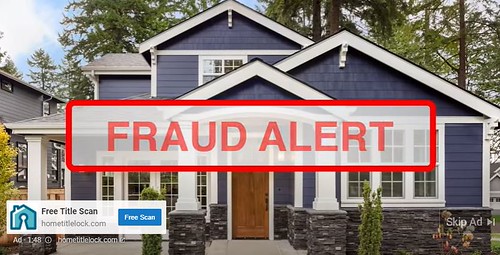 This article originally appeared in the November issue of the Merrimack Valley Housing Review.

A number of homeowners have recently called the Registry of Deeds to ask if the title to their home is safe from online theft. Because my own social media stream has been filled with ads from a company called Title Lock, I understand why they are calling. The ads usually begin with something like this: “Alarming FBI report shows hackers can steal the title to your home in minutes – without you ever knowing it.” For $14.99 per month, Title Lock will provide its “basic protection service” which monitors your title and notifies you if anything is amiss.

So is this a legitimate concern? Well like most things related to real estate law, it’s complicated. First, your “title” is not a thing. Instead, it is a legal opinion based on a review of all the records at the registry of deeds about who owns or has a legal interest in a particular parcel of real estate.

That said, here is the scenario contemplated by Title Lock and its competitors, at least as I understand it: A wrong-doer creates a deed that purports to transfer ownership of your property from you to him, forges your name on the deed then forges a notary public’s signature and stamp on the deed; and then records this forged deed at the registry of deeds. Next, the wrong-doer applies for a mortgage that uses your property that now appears to be in the name of the wrong-doer as security for the loan. The lender consults the registry records, sees that the applicant owns the property, grants the loan, and records a mortgage in the name of the applicant (not you) that encumbers the property. The wrong-doer/applicant never makes a payment and the lender eventually begins foreclosure proceedings against the property. The wrong-doer likely listed his mailing address as something other than the property address so you, still living in the house and unaware of all this, would not get any notices of the foreclosure until one day when an auctioneer showed up on your front steps to sell your house at auction.

Sounds pretty scary – rightfully so – but under Massachusetts law, a forged signature does not convey ownership so the forged deed would be void as would the new mortgage that is being foreclosed. The real risk is not that you will lose your property, it is that you will be saddled with the hassle and cost of proving to everyone that you did not execute the forged deed. Because of all the layers of forgery involved (your signature, a notary’s signature) it would not be very difficult to prove that, however, the burden would be on you to initiate the lawsuit needed to determine that.

What this Home Title Lock service purports to do is to continuously scan the registry of deeds index and anytime your name appears on a newly-recorded document to then notify you of this fact. Because the registry of deeds index is online and freely available to anyone, a homeowner concerned about this could periodically enter his or her name in the registry website and perform an identical check. That would take about 30 seconds but it would require you to go to the website on a recurring basis.

Also, several registries of deeds in Massachusetts already offer a similar service for free, however, most registries (including this one) are not yet able to offer it. When the pandemic struck we were in the process of selecting and installing an entirely new computer system with many advanced features including this automatic monitoring capability but its deployment has been delayed because of the pandemic.

In any case, whether you paid for Title Lock, had a registry-provided automated alert, searched the registry records yourself, or just waited for the auctioneer to show up, you would be in the exact same position: having to initiate a lawsuit to expunge the fraudulent deed and proving that the deed was forged. As I said, it should not be too difficult to prove the forgery but you would still bear the cost of hiring a lawyer to handle the matter. Title Lock does offer an enhanced “resolution service” to help with this but I am not sure of the cost and coverage. Also, some title insurance policies would cover this, but some do not – you have to read the fine print. (Most people obtain title insurance when they buy or refinance the home but since it is hardly ever used, few people are familiar with it).

All this begs the question what does the registry of deeds do to prevent the recording of forged deeds? The answer is not very much but that is a public policy decision made at echelons of government high above the registry. Specifically, our land records system relies on documents being rapidly recorded. If the registry were to have to investigate every signature on every deed to determine whether it was a forgery, the recording process would grind to a halt and the multibillion dollar real estate economy would be severely disrupted.

While the incidence of this type of fraud may be on the rise, it is still very rare. In my 25 years as register of deeds, I’ve never encountered a case where this has happened. There have been a couple of forged deeds, but they involved family members or friends of aged and incapacitated homeowners, not an anonymous interloper on the internet.