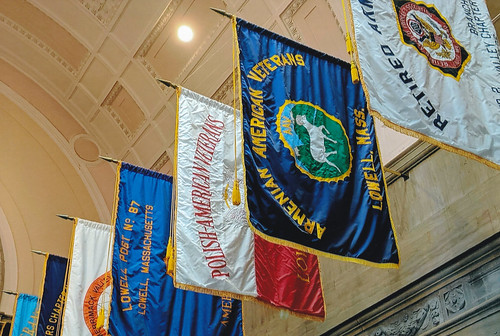 The entry foyer of the Lowell Memorial Auditorium is known as the Hall of Flags for the 40 or so flags that hang high above the floor. Some of the flags are reproductions from the Revolutionary War era, but most represent the many Veterans Organizations that exist or that have existed in Lowell through the years. Here is a description of each of the Veterans flags:

AMVETS – Flag is blue with a gold version of the national organization’s logo in the middle. The logo contains the words American Veterans – AMVETS along with an eagle over three stars surrounded by a wreath. AMVETS was formed in December 1944 to assist World War II veterans in obtaining benefits available from the federal government. Membership was later expanded to include all veterans.

Army Navy Union – The flag is white with John Fennell GAR (Garrison) 26 Lowell Mass. Army & Navy Union U.S.A. surrounding the organization’s badge. The Army Navy Union was founded in 1886 by three U.S. Army veterans of the “Indian Wars” making it one of the oldest veterans organizations in America. It received formal recognition by Congress in 1894. A Lowell chapter was formally organized on February 27, 1946 and became known as John J. Fennell Garrison 26. Fennell was a young sailor from Lowell who died when submarine S-4 on which he was a crew member, was accidentally rammed by a Coast Guard vessel off Provincetown, Massachusetts, on December 17, 1927. The entire 40 man crew of the submarine perished.

Daughters of American Revolution – Flag is light blue with a vertical white stripe. Inside the white area are the words Molly Varnum Chapter Lowell, Mass DAR above and below the logo of the Daughters of the American Revolution. The National Daughters of the American Revolution was founded on October 11, 1890 to perpetuate the memory and spirit of those who achieved American independence. The Lowell chapter was founded on October 30, 1894 and was named the Molly Varnum Chapter after Mary “Molly” Varnum (1750-1833) whose husband, Joseph Bradley Varnum, commanded the militia from Dracut during the Revolutionary War and who later became the Speaker of the U.S. House of Representatives.

Gold Star Mothers – Flag is white with American Gold Star Mothers Chapter 7 Lowell Massachusetts in gold letters above and below a large gold star. American Gold Star Mothers, Inc. was formed in 1928 for mothers of those lost in World War I and holds a charter issued by Congress. Over time, the organization has expanded to include any woman who has lost a child in active service in the U.S. military. The name of the organization comes from the practice of families of service members displaying a flag in a window of their home. Service members of the household are represented by a blue star on the flag while those who have lost their lives in the service are represented by a gold star.

Gold Star Wives – Flag is blue with Gold Star Wives organized of American Inc. Lowell, Mass. in gold letters above and below a large gold star. Gold Star Wives of America, Inc., was founded in 1948 with its own Congressional charter. Its mission is to provide support to surviving spouses and children of those killed while on active military service. The name of the organization comes from the practice of families of service members displaying a flag in a window of their home. Service members of the household are represented by a blue star on the flag while those who have lost their lives in the service are represented by a gold star.

Lowell Veterans Council – Flag is blue with Lowell Veterans Council in white letters across the top above a large yellow star. Beneath the star are the words Served in Valor in red letters. Across the bottom are the logs of the five service branches with the name of each – Army, Navy, Marines, Air Corp, Coast Guard – above the respective logo. The Lowell Veterans Council was formed in 1919 when representatives from the Grand Army of the Republic, the United Spanish War Veterans and the newly formed American Legion began coordinating events and activities.

Veterans of Foreign Wars – Flag is blue with Walker-Rogers Post No. 662, Lowell, Massachusetts, Veterans of Foreign Wars of the United States, Mustered in April 26, 1921, in gold letters above and below the VFW logo. Lowell’s Walker-Rogers Post 662 Veterans of Foreign Wars was chartered on April 26, 1921. The post is named for 1st Sergeant Ralph B. Walker of Company M, Ninth Regiment of Massachusetts Volunteer Militia, the first service member from Lowell to die in the Spanish-American War, and for Fireman third class George Rogers, the first from Lowell to die in World War I. Rogers perished when his ship, the USS Jacob Jones, was torpedoed by a German submarine.